Home » Entertainment » Movies » Things You Might Not Know About Home Alone 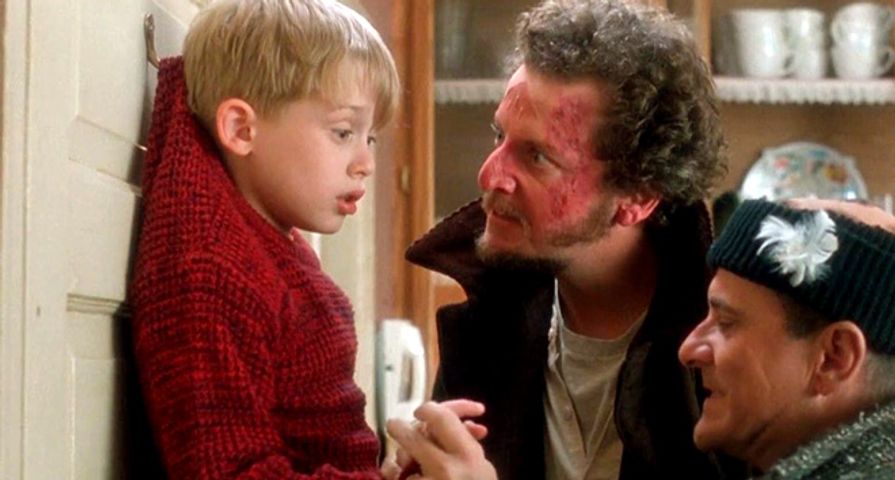 Home Alone is synonymous with Christmas and in the more than 25 years since the film first premiered on November 16, 1990, it has become one of the top holiday films of all time. No matter how much time goes by, Kevin McAllister will forever be how Macaulay Culkin is remembered, and every year fans wonder what the former child star is up to now. While we can’t answer what exactly Kevin’s dad did to afford the unbelievable house and incredible family vacations, we do have many interesting tidbits about the iconic film. Here are 10 things you probably didn’t know about Home Alone:

There is no denying that back in 1990 what was accepted for a “family film” is much different than what is accepted now so it isn’t surprising that with the rather dark premise and surprising physical violence, some of the stars forgot they were acting in a family-friendly movie. As it turns out Joe Pesci was having a hard time not dropping f-bombs in his character Harry’s lines when he got on his rants. As a result, director Chris Columbus suggested that Pesci use the word “fridge” instead. 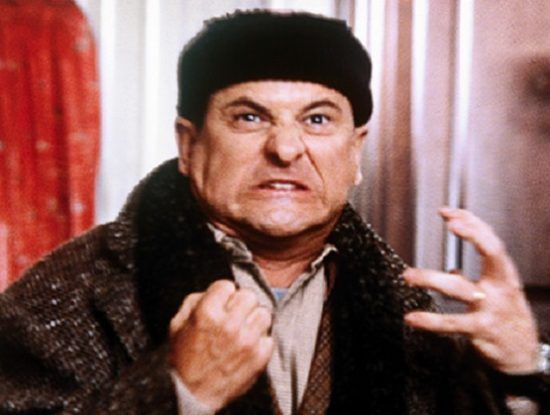 As an original story, the complete concept behind Home Alone all came about from just one scene in the 1989 film Uncle Buck. The film, of course, starred John Candy and Macaulay Culkin, and Home Alone was derived from the single scene in Uncle Buck when Culkin’s character interrogated a potential babysitter through the letterbox in the door. Of course, Home Alone made sure to honor Uncle Buck with the scene in which Kevin pelts Marv in the face using his pellet rifle when Marv stuck his head through the doggy door. 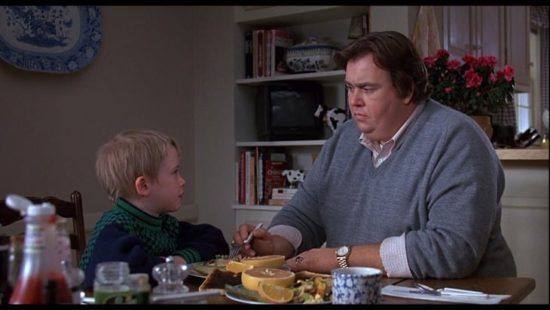 While Chris Columbus liked John Hughes’ script for Home Alone, he felt there was something vital missing from the film, so he created the character of Old Man Marley who wasn’t in the original script. Columbus thought the script was much too focused on physical slapstick comedy so he decided to add Marley as a “guide” for Kevin to teach him the importance of forgiveness and caring for your family. 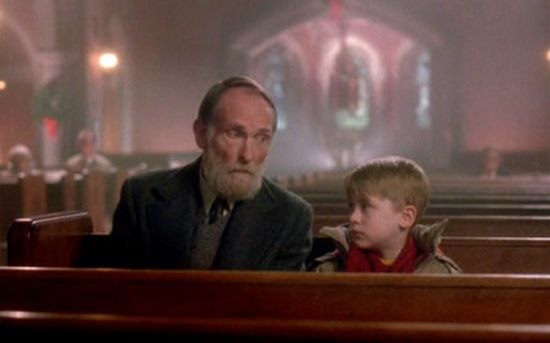 Considering the film was derived from Uncle Buck, it isn’t surprising that Macaulay Culkin was immediately thought of to lead Home Alone as Kevin McAllister, but then again he didn’t have much of a choice either. John Hughes admitted he wrote the role specifically for Culkin, but Columbus wasn’t entirely convinced he was the only child actor who could pull it off so he held auditions anyway. After nearly 100 other young male actors auditioned, Columbus realized Hughes was right and Culkin was handed the role. 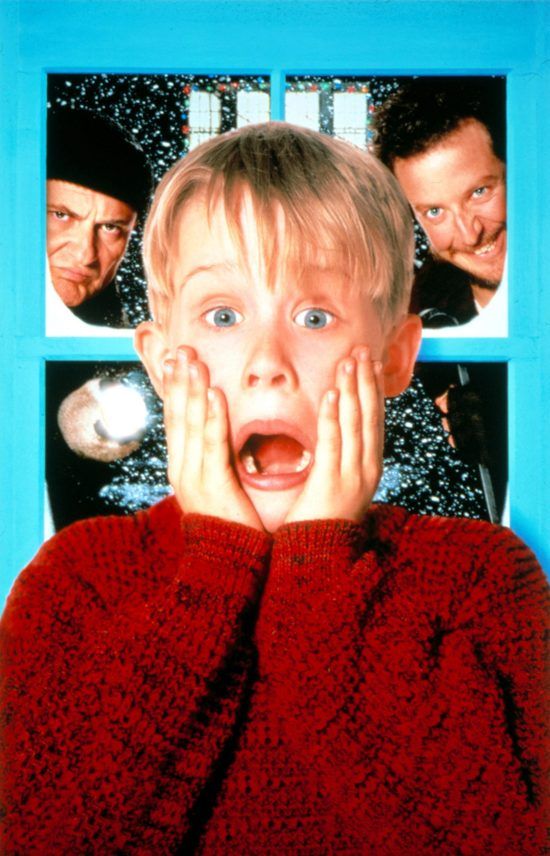 While both Home Alone and Home Alone 2: Lost In New York have many iconic and memorable scenes, but one that tops the list is the scene in which Marv has a tarantula on his face. Surprisingly, the tarantula was in fact very real, but Daniel Stern’s scream was not. The actor wasn’t thrilled about having the spider on his face and he agreed to do it for only one take and whatever shot they got was the one they had to go with. Luckily it worked (partially because Stern’s fear was very real) and since he couldn’t actually scream as it would have scared the arachnid, the scream was dubbed into the film in the editing process later. 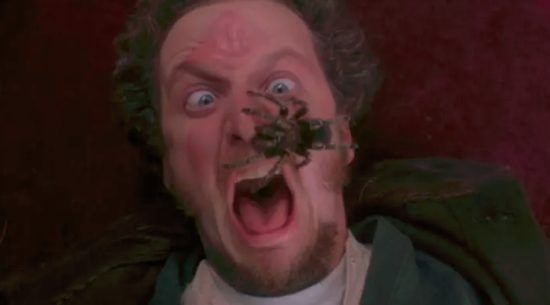 While Harry and Marv are awful, at least they aren’t as creepy as Kevin’s Uncle Frank played by Gary Bamman, and there is a reason Uncle Frank gave off such a bad vibe. There are reports that an early edition of the script had Uncle Frank who was jealous of Peter’s success as the bad guy who pays burglars to rob Kevin’s family when they were away. Although that version of the movie didn’t pan out, there is a reading of the film in which Uncle Frank is given the role of “evil mastermind.” 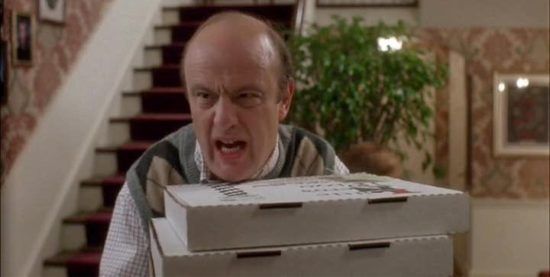 Joe Pesci and Daniel Stern had undeniable on-screen chemistry and amazing comedic timing as the “Wet Bandits” Harry and Marv, and they credit that to the fact they were friends before starring in the film. Both men had acted on the 1982 film I’m Dancing As Fast As I Can, but were cut out. “Everyone assumed we were thrown together for the first time on Home Alone, but we’d made each other giggle on the set in another movie years before that we were both cut out of: I’m Dancing as Fast as I Can. We played people in a mental institution. Joe walked around all the time with this rolled-up tube of architectural drawings. That was his character,” Stern revealed. He continued, “And during one of the takes, there’s a Ping-Pong table in the middle of the room, and Joe takes his tube of paper and puts it up to his nose and snorts the line of Ping-Pong balls. I fell on the floor laughing. I became his friend right then.” 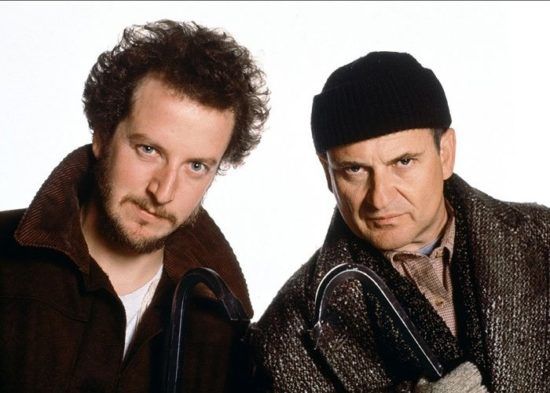 Anyone who has watched Home Alone knows it is highly unlikely that Marv or Harry would walk away from half of the attacks they suffered via Kevin’s clever plans, and as it turns out filming the stunts was just as stressful. “Every time the stunt guys did one of those stunts it wasn’t funny. We’d watch it, and I would just pray that the guys were alive,” Columbus said and also revealed that because they had difficulty hiding safety harnesses on camera, they ended up just performing the stunts without the safety gear. Surprisingly enough, through it all, it was Macaulay Culkin who suffered the real-life injury. In the scene where Harry threatens to cut off all of Kevin’s fingers and bites his hand, he accidentally bit hard enough to leave a scar! “In the first Home Alone, they hung me up on a coat hook, and Pesci says, ‘I’m gonna bite all your fingers off, one at a time.’ And during one of the rehearsals, he bit me, and it broke the skin,” Culkin revealed. 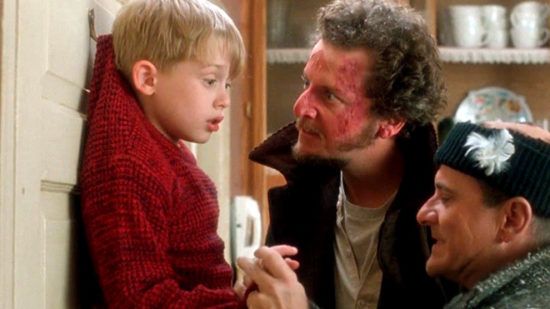 “Buzz, your girlfriend… WOOF!” is one of the most memorable lines from the film, and although many felt bad for the young girl in the picture, there is no need to. As it turns out the unimpressive photo of Buzz’s girlfriend that Kevin finds is actually the art director’s son dressed up to look like an unattractive girl. Chris Columbus decided that was the best way to handle the scene because he felt it would be too cruel to make fun of an actual young girl’s appearance. “Buzz’s girlfriend is not a girl… the producers felt that it would be a little bit unkind to put a girl in that role of just being funny looking, and the art director had a son who was more than willing to volunteer for the part. I think if he had known that it would become the highest grossing family comedy of all time, he might have had second thoughts about it,” Devin Ratray, who played Buzz, revealed years later.

Due to the fact that Angels With Filthy Souls had such a big part in Kevin tricking people in the Home Alone films, many audiences couldn’t wait to rent the old gangster film but they didn’t realize it isn’t a real movie. The footage used was created specifically for Home Alone and shooting for Angels With Family Souls only took one day, but they made sure to make it as authentic as possible. It was filmed in black-and-white negative film and the objects in the main character Johnny’s office were things from that actual era.