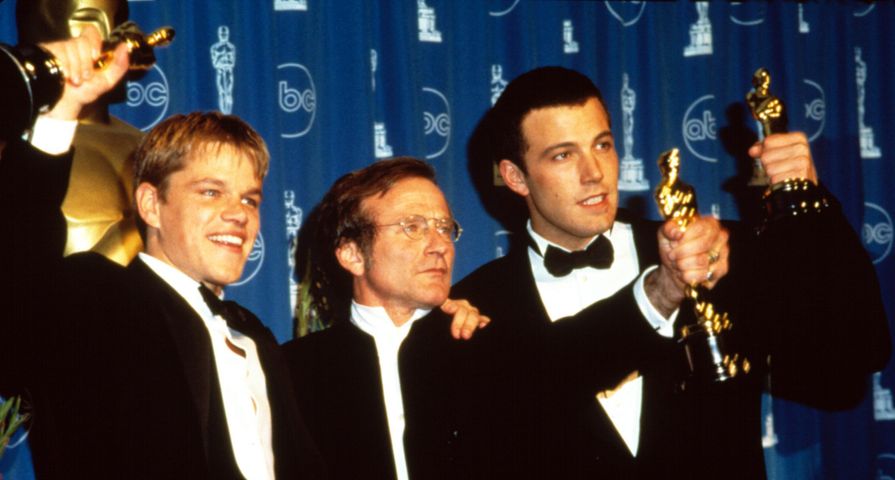 All the talk about Ben Affleck at the moment may be focusing on his newly announced divorce from Jennifer Garner, but there was a time when fans were more focused on his flopping films and the media was obsessed with revealing details about his previous high-profile partners. Affleck has been in the entertainment industry for quite awhile and, through all of the ups and downs, good movies and the bad, many may have forgotten about some of the best (or worst) Affleck moments before he was a husband and father, and soon to be divorcee. Here are 10 memorable moments from Ben Affleck’s life before Jennifer Garner.

Way back when Ben Affleck was eight-years-old, he met a new kid to the area who had moved in two blocks away. Ben became fast-friends with 10-year-old Matt Damon and apparently the two would spend their lunch hours talking about their future plans to become actors. As teens, they spent their summers working jobs together and eventually traveled to New York for auditions by saving money for the trip in a joint bank account. BFFs!

9. The Voyage of the Mimi

There’s a chance that when you were in sixth grade you watched the PBS children’s series The Voyage of the Mimi (1984, 1988). A young Ben Affleck joined the crew of the sailing ship Mimi as C.T. Granville who was accompanying his scientist grandfather on board to first study whales and then Mayan culture. The pre-teen Affleck was just as adorable as the adult he’d grow up to be.

Source: The Voyage of the Mimi

In high school, Ben had a poor attendance record and was apparently an unfocused student, but that didn’t stop him from getting high SAT scores and going on to higher education. After following a girlfriend to the University of Vermont where he studied Spanish, Ben moved to Los Angeles to study Middle Eastern affairs at Occidental College. After just a year and a half, he dropped out when his creative writing prof gave an early version of Good Will Hunting a bad review. Affleck certainly deserves an A+ for NOT listening to that pessimistic professor.

In 1993, Ben Affleck joined the ensemble of the classic ’70s-glorifying movie Dazed and Confused. Affleck’s character O’Banion is the epitome of a bull-headed bully and made audiences wince when he wielded his paddle and cheer when he was pounded with paint.

Continuing his streak of creep-tastic characters, Ben appeared in 1995’s Mallrats as the seriously skeevy Shannon. “Who’s your favorite New Kid? Yeah, call me Joey!” No. No! NO!!! In 1997’s Chasing Amy, on the other hand, Ben played the main romantic lead, comic book artist Holden. At a time when Affleck was starting to worry that he’d always be stuck playing the jerk, this was the role that finally broke him free of the pin-head pigeon-hole.

5. Suiting Up as a Superhero

Starring as a superhero may be a dream all actors have, but that doesn’t mean they’re all suited to suit-up. This certainly seemed to be the case when Ben Affleck was cast in 2003’s Daredevil. With mixed reviews from both media and audiences alike, it didn’t earn Affleck any awards, but he did get to star alongside future wife Jennifer Garner who played ninja assassin and love interest, Elektra.

2003 wasn’t a box-office boost for Ben. In fact, it was more of a series of box-office bombs. Along with Daredevil, Affleck starred in Gigli, regarded not only as one of the actor’s worst movies, but also considered to be one of the worst movies of all time. Ouch! Co-starring his girlfriend at the time Jennifer Lopez, the film only managed to earn back $7.2 million of the $75.6 million budget that had been spent on it.

Before there was Jennifer Garner, Ben Affleck had a high-profile relationship with Gwyneth Paltrow. From 1997 to 2000, the pair was the focus of massive media attention and appeared together in 1998’s Shakespeare in Love and 2000’s Bounce. When asked about her time with Affleck, Paltrow spoke well of him, saying, “He’s super intelligent, and really, really talented. And he’s funny. But he wasn’t in a good place in his life to have a girlfriend … I like him. I’m friends with him still.”

Ben Affleck’s high-profile relationship with Gwyneth Paltrow didn’t dissuade him from getting into another super-public relationship soon after. From 2002 to 2004 Ben dated and then became engaged to Jennifer Lopez after the pair met on the set of the disastrous movie Gigli. Ben and Jen didn’t shy away from putting their relationship on display, even featuring it in her video for “Jenny from the Block” and prompting the media to unleash the term “Bennifer” upon the unsuspecting public. Despite this, the attention apparently got to be too much and their 2003 wedding was called off only four days prior to the ceremony because of “excessive media attention.” They broke up in January 2004 when Lopez claimed that the media attention had become too much for Affleck to handle.

Undoubtedly, Ben Affleck’s most memorable pre-Jennifer Garner moment was his amazing Academy Award win for 1997’s Good Will Hunting. After winning the Golden Globe Award for the movie he co-wrote with best-friend Matt Damon and co-starring the late Robin Williams, Affleck and Damon made Oscar history with their incredibly exuberant acceptance speech. With a rambunctious enthusiasm and unbridled excitement that infected even viewers watching at home, it was a moment that defines Ben Affleck as one of the most likeable of today’s actors. He himself said that it was a time in his life that was “dreamlike.”