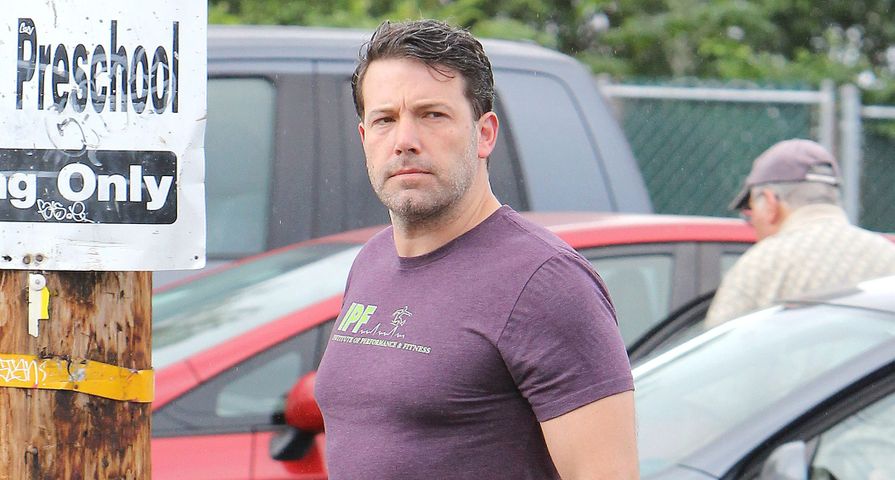 We’ve all loved Ben Affleck at one point or another, and it is impossible to argue the guy’s talent–maybe more so for directing than acting–but he’s like a great athlete who always gets injured. And there’s always an excuse. The whole Jennifer Lopez thing… Ben said he just lost his mind, and sense of self. The terrible movies around the turn of the century…a string of bad luck. Now, he’s in the headlines nearly every day, and none of it’s good. Is he having a mid-life crisis? Her are six signs that it might be the case.

It’s never a good thing when you’ve just played Batman to be associated with plastic surgery rumors, or gossip sites pointing out that it looks like you’ve jumped on the Botox train. Do we believe it? Eh. The evidence is shaky. The fact is, before and after comparisons are of a bearded Ben who doesn’t seem to care much for his appearance versus a clean shaven, well put together Ben. But… there is Ben’s past. The Ben Affleck before Armageddon, when he had slight gaps in his teeth, which he obviously felt were unsightly for a leading man. He got those suckers capped with some pearly whites. And if any of the present rumors about his being back on the prowl for ladies are true, it’s not that difficult to believe that Ben might have hopped into the chair for a little facial rejuvenation. We’ll say the jury is out on this one.

Is there anyone more painful to watch when accepting an award? It’s half-sweet, and half-excruciating. Like watching a poorly spoken friend give a speech in an Introduction to Communications class. But we’ve also been privy to supremely confident and cocky Ben Affleck, who apparently knows the answer to everything. The disparity resounds: this guy isn’t comfortable with who he is, or he’s way too concerned about what other people think of him. Comparing cocky Ben to humble Ben, we’ll take the latter, but perhaps there is a balance? A balanced Ben that doesn’t include mingling with women who aren’t his wife, or are somebody else’s wife? And who is still confident in sharing his expertise and experience, and accepting awards without acting like he’s on the F.B.I.’s 10 Most Wanted list?

Ben seems to have a case of the ‘grassisalwaysgreeneritis.’ These are people who, regardless of their accomplishments, are unfulfilled for whatever reason. Generally, these people are super focused on themselves and struggle to share things with others…like life. Case in point, Ben Affleck putting the moves on J.Lo when she was married to Chris Judd, damning the consequences. After he came to his senses, and realized he was in too far over his head, he swam for shore and eventually came to know the grace that is Jennifer Garner. Ben would never do better than Jennifer Garner. He knew it. We knew it. The world knew it. But damn any adversarial consequences, the nanny made him feel like a young man again. He became obsessed with the conquest (self esteem issue), and thought the taste of something new might suffice. No dice.

Did Ben play too many individuals suffering from identity crises in recent memory? Were the nature of his characters in flicks such as Gone Girl and Batman V Superman a little too playboy, and not enough homebody? Ben always seems affected by his work when he’s acting, and in a manner that leaves a lasting effect. These characters needed more than one woman, and maybe they triggered a thought process in the actor leading him to believe that life was too short to disallow a little side action from time to time. This is a shot in the dark, because Ben may have had an issue with being a faithful mate from the get-go, but it’s not too hard to believe. If playing these roles, he realized the young buck characters are behind him, it might have sparked that mental wrestling match with mortality.

These are the telltale signs that Ben might be freaking out about being in his early to mid-40s. He and Jennifer Garner are allegedly in the midst of divorce proceedings, and yet his name is being tossed around on the daily with what seems like a new female love interest. These reports likely don’t hold any weight or water, but they exist for some reason. They also come on the heels of reports that Ben and Jennifer were attempting to work things out for the benefit of their family, and the fact that there is still a lot of love shared between them. That said, if he is flirting like a high school kid looking for a prom date, it suggests some sort of mid-life crisis. Some desire to prove things that don’t need to be proven, because they’re all relative to begin with.

1. He Strayed From Jennifer Garner

This seems rather simple when you strip the scenario down to its brass tacks. Ben is either a colossal douche, or having some sort of crisis. How else could you completely screw over a support system, lover and life partner like Jennifer Garner? His faux pas hurt Jennifer, and in the long run, it’ll hurt his relationship with his children. Sure, they’ll get over it–everyone will–but if they look at Jennifer the same way industry professionals and fans do, they’ll be asking the same question: “What the hell, man?” Maybe it’s more than a mid-life crisis for Ben…maybe it’s an existential crisis stemming from the fact that he’s insatiable when it comes to conquest, and proving himself to the next lovely lady whom he finds intriguing. Maybe his growth toward existential maturity exacerbated this nastiness? Who knows? Ben? Clearly not.