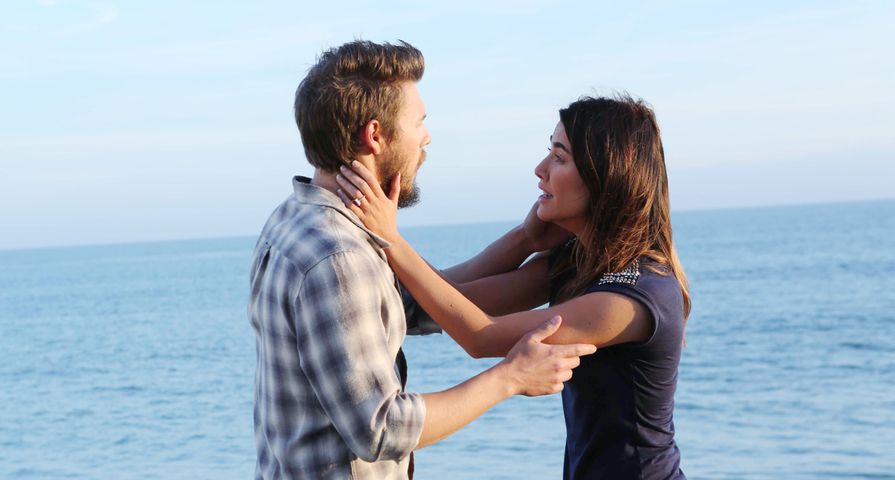 This week’s Bold & The Beautiful (B&B) theme will feature classic episodes with memorable moments. This includes airing the B&B’s debut episode from March 23, 1987. Plus, viewers will see Hope’s boyfriend Oliver and her mother Brooke’s mistaken identity encounter, a drunken Sally giving Stephanie a makeover and more. Learn more below in the B&B spoilers for the week of June 8, 2020.

9. A Debut To Remember

Fans have been clamoring to see the sudser’s debut since the B&B began airing classic episodes. Producers will grant that wish this week and on Monday, viewers will see the first episode from March 23, 1987. Forrester patriarch Eric, with his sons Ridge and Thorne by his side, will debut his new fashion line to the press. Also, Bill Spencer Sr. will tell Ridge he wants him to stop dating his daughter Caroline. And Brooke is stunned when her sister Katie tells her she was attacked.

Ridge, designing for Spectra Fashions, and Eric for Forrester Creations, compete against each other in a fashion show that took place in the beautiful city of Portofino, Italy. In this episode that originally aired on January 6, 2003, Stephanie and Clarke emceed the event, introducing the designs from each fashion house. The Spectra showstopper intro embarrassed Ridge, as it was a huge glamor shot of Sally and the Forrester showstopper gown was modeled by Brooke, who arrived by boat on the Ligurian Sea.

Thorne, meanwhile, found Macy waiting for him at a church. He kissed her and told her he was still in love with her. And even though she never stopped loving him either, she explained to Thorne that she needed to leave in order to protect her father. When Lorenzo showed up at the entrance to the church, he implored Macy not to listen to Thorne, who let her down so many times before.

Stephanie found herself exasperated with Brooke as usual. After getting engaged to Ridge, Brooke taunted Stephanie, showing off her ring, in this episode that originally aired on September 16, 2003. Although Ridge had asked Stephanie for her blessing and she had given it, once she was alone with Brooke it was a different story. She told her rival she would never accept her as a part of the Forrester family.

Later, Stephanie turned to another rival for solace and Sally and Stephanie drowned their sorrows together. As they continued drinking, an intoxicated Stephanie offered Sally a job at Forrester. Then Sally suggested to Stephanie that if she wanted to win Eric back, she needed a makeover. An extremely inebriated Sally then dumped an overturned planter on Stephanie’s head and proceeded to butcher her hair.

Oliver told his sister Aggie that he wanted Hope’s high graduation party to be the best night of her life, in this episode that originally aired on June 4, 2010. Aggie cautioned her brother not to put any pressure on Hope. She was still a virgin and was adamant about waiting for the right person. Oliver told his sister Hope would use the words “I’m ready” to let him know when she was ready to take that step in their relationship.

Everyone at the party was wearing a mask, so Oliver had a problem finding Hope. Marcus pointed out a girl in a blue dress, with her hood up and a mask on. Oliver put on his mask and headed over. When he got closer, he noticed Hope was wearing her necklace and the two danced. Then she told him “I’m ready” and they found a private area against a wall and their passion erupted. Right after they had sex, Oliver went inside and was flabbergasted to see Hope walking down the staircase. The performer at the party, Daddy Yankee, told everyone to take off their masks and Oliver looked over to the girl he’d just had sex with. His eyes widened in horror when she took off her mask and it was none other than Hope’s mother Brooke.

Thanks to Wyatt finding him in the remote cabin where Quinn had been holding him for months, an amnesiac Liam’s memories of who he was and who he loved came flooding back to him. Wyatt was appalled to find out that his mother lied to Liam and told him his name was Adam and her name was Eve and that they were married. The brothers confronted Quinn and then locked her up in a closet in this episode that originally aired April 8, 2016.

Liam asked Wyatt to race back to the beach house, so he could be reunited with Steffy. What he didn’t know was that Steffy married Wyatt only a day earlier. When they arrived, Wyatt went inside the house to tell their father Bill that Liam was OK, while Liam looked for Steffy down by the water. She was sitting near the shore, worrying about Liam. He’d been missing for months and she wondered if something terrible had happened to him. As Liam walked along the sand, he finally spotted Steffy and called out her name. Steam then ran down the beach toward each other, and toward a romantic reunion in each other’s arms.