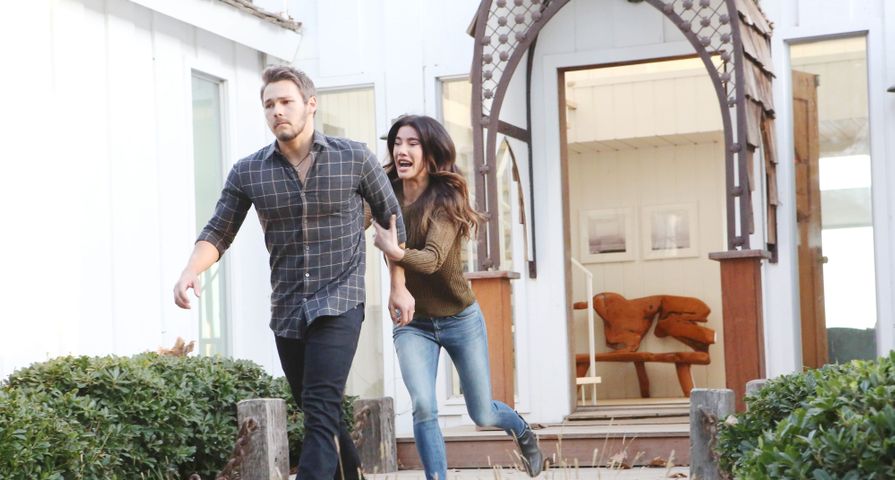 Leading up to the Daytime Emmy Awards — taking place on Friday, June 26 — the Bold And The Beautiful (B&B) will highlight some of its past Emmy-winning performances this week. The theme week will include Liam finding out Bill is his father; Zende confronting his father-in-law Julius about his treatment of Maya; Steffy pleading with Liam not to leave her and more. Learn more below in the B&B spoilers for the week of June 22, 2020.

After taking a paternity test, Liam was less than pleased when he heard the results – Dollar Bill was his father. Hope and Katie tried to get the two men to focus on what they had in common, rather than their differences, in this episode that originally aired on September 1, 2010. Scott Clifton won his first Emmy award (Outstanding Younger Actor) for this episode and is the only actor to win a Daytime Emmy in all three categories – Younger Actor, Supporting Actor and Lead Actor.

Meanwhile, Stephanie and Ridge were both happy to find out Thorne was not Liam’s biological father. Thorne, however, was disappointed. He told his mother and brother that he had been in love with Liam’s mother Kelly and had been hoping he had a son with her. They tried to cheer him up and Ridge joked around, telling him they had planned to set Liam up with an office in the basement at Forrester.

Zende confronted his father-in-law Julius about his terrible treatment of his transgender daughter Maya. His wife Nicole had been the surrogate mother to Maya and her husband Rick’s daughter Lizzie and was having second thoughts about signing the adoption papers. When Zende found out Julius was encouraging Nicole to keep Lizzie, he hit the roof. And in an emotional plea to his wife, he convinced her to do the right thing. Rome Flynn won the Outstanding Younger Actor award for this episode that originally aired on June 22, 2017.

Stephanie figured out Deacon was the father of Brooke’s baby when she happened upon the two of them talking in this episode that originally aired on May 13, 2002. She ordered Deacon out of the room and then proceeded to call Brooke the “slut of Beverley Hills” as she slapped her across the face. Stephanie also informed Brooke she needed to marry Whip for the sake of her daughter Bridget, who was married to Deacon. Susan Flannery won her third Outstanding Lead Actress Emmy for her performance in this episode.

Megan ran into Deacon, who was anxious and worried. He told her Stephanie just found out he was the father of Brooke’s unborn child. Confused, he wasn’t sure what to do about it, and he left Brooke alone with Stephanie. Megan advised him that Stephanie despised Brooke, and she wasn’t sure just how safe it was, leaving the two women alone. Deacon took off to go make sure Brooke was okay.

When Taylor informed Katie that her daughter Steffy was having a love affair with Katie’s husband Bill, she suffered a heart attack. Extremely ill but also incredibly determined, Katie snuck out of the hospital and headed to Steffy’s loft to confront her in this episode that originally aired on August 5, 2011. A concerned Steffy told her she shouldn’t be there in her condition, but Katie retorted she had to tell Steffy that Bill would never be with her. Heather Tom won the Outstanding Lead Actress Emmy for this episode and is the only actress to win a Daytime Emmy in all three categories – Younger Actress, Supporting Actress and Lead Actress.

Bill freaked out when he arrived at the hospital to see his wife and found an empty bed in her hospital room. He had no idea where she could be. After yelling at Liam to tell him where Katie had gone, he was relieved when she returned. The two then hashed out their differences, and Katie told him: “You shouldn’t have been with Steffy.”

Steffy pleaded with Liam to forgive her after he found out she’d taken a paternity test. At first, Liam assumed she’d slept with his brother Wyatt and when she denied it, he kept insisting she tell him who it was. When she finally admitted it was his father Bill, all hell broke loose and Steffy begged him not to leave her. Jacqueline MacInnes Wood won her first Daytime Emmy Award last year, as Outstanding Lead Actress, for this episode that originally aired on January 2, 2018.

1. Secrets That We Keep

At Spencer Publications, Bill and Justin talked about how Liam could never find out the truth about what happened between Bill and Steffy. Justin told Bill he would never reveal the secret, but he also wondered how his friend could hide his feelings for Steffy. But Bill told him even though he wished he could be with her, he had to step aside for the sake of his son.