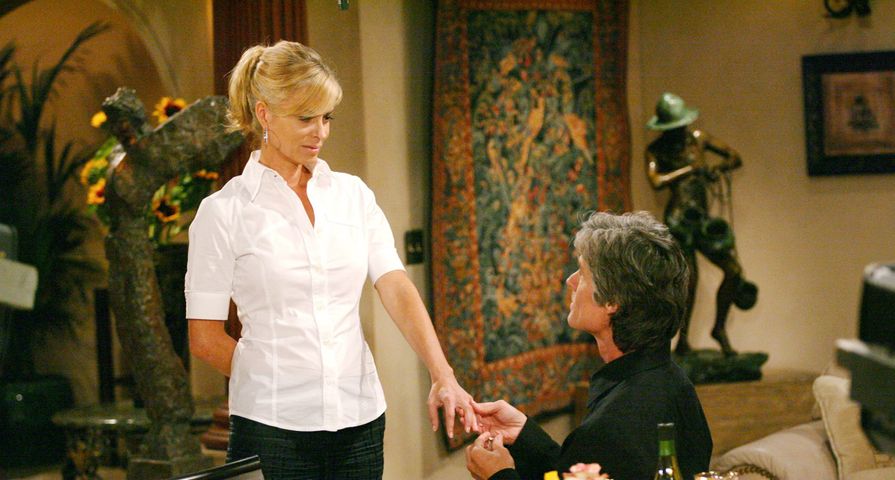 Fans of both Bold And The Beautiful (B&B) and Young And The Restless (Y&R) are in for a treat this week, as B&B features cross-over characters from its sister soap. Episodes include Lauren vowing to confront Sheila, who is married to Eric, and Brooke using Victor to try to make Ridge jealous. Learn more below in the B&B spoilers for the week of June 15, 2020.

Having just learned Sheila is still alive, Lauren Fenmore vowed to confront her, in this episode that originally aired on November 3, 1993. Sheila has gone to Santa Catalina island in the hopes of repairing her marriage with Eric. And Lauren has headed there with her husband Scott Grainger, hoping to confront the villain about her transgressions in front of both Eric and Scott.

During a business dinner, Brooke used Victor Newman to try to make Ridge jealous in this episode that originally aired on January 28, 1999. Ridge was having dinner with Taylor at Café Russe and couldn’t help being distracted by Brooke sitting at the next table with The Mustache. “Look at him pawing her. Who the hell does he think he is anyway?” Ridge asked his wife. Brooke told Victor exactly what she was up to and asked him to grant her one favor. “Kiss me,” she said, and he happily complied.

7. Victor And Ridge Face Off

Although Taylor pleaded with Ridge to ignore Brooke and Victor, Ridge couldn’t help himself. He approached their table and confronted the Newman Enterprises CEO. He warned Victor not to take advantage of Brooke. “And I warn you!” Victor shouted as he stood up. Face to face, Ridge told him to go home to his wife, but Victor wasn’t going anywhere. He sat back down and held Brooke’s hand. Taylor approached the table and told Ridge they were leaving as Brooke smiled at her triumphantly.

Katherine Chancellor had arrived in Genoa City to speak to Stephanie about John Douglas’ trust that controlled ownership of Forrester Creations in this episode that aired on November 1, 2005. When she told Stephanie that she had provided tax information to an attorney every year, Stephanie realized Eric had known about the trust all along and hadn’t told her about it. She was then stunned when she realized she was the sole owner of Forrester.

Nick asked Brooke if she’d been having sex with Eric and she said she was. But Nick didn’t believe her because he knew she was in love with him. Then she finally admitted that her marriage to Eric was one of convenience and they weren’t sleeping together. Nick then took Brooke to the Shady Marlin and set sail, telling her they needed to sort out their feelings for one another.

Jack Abbott showed up at the Forrester Creations LA office in this episode that originally aired on December 24, 1998. Eric, Thorne, Ridge and Brooke suggested that Jabot and Forrester collaborate. Throughout most of the meeting, Brooke was annoyed to see how anxious Ridge was acting. He wanted it to end because he had promised to attend a party being held in Taylor’s honor, hosted by Dr. Pierce Peterson.

Sally and Darla crashed Taylor’s party by pretending Darla was Pierce’s sister. They were looking for Macy and found her, looking beautiful and incredibly happy. Stephanie and James also crashed the party. Stephanie knew that Pierce had romantic designs on her daughter-in-law Taylor, and she wanted to be there to put a stop to it.

Brooke leaned on and complained to Nick when she found out Ridge was going to ask Ashley to marry him in this episode that originally aired on September 26, 2007. She was convinced that Ridge should be with her and not Ashley. Nick, who was married to Taylor at the time, told Brooke that what she needed to do was move on with her life.

Rick was disappointed that Ashley was going to marry Ridge. He still cared for her and hoped they could give it another go after their fling in Paris. But he also had a warning for his ex — to watch out for his mother. His words of warning bore out shortly after when Brooke confronted Ashley and told her that nothing could come between her and Ridge.