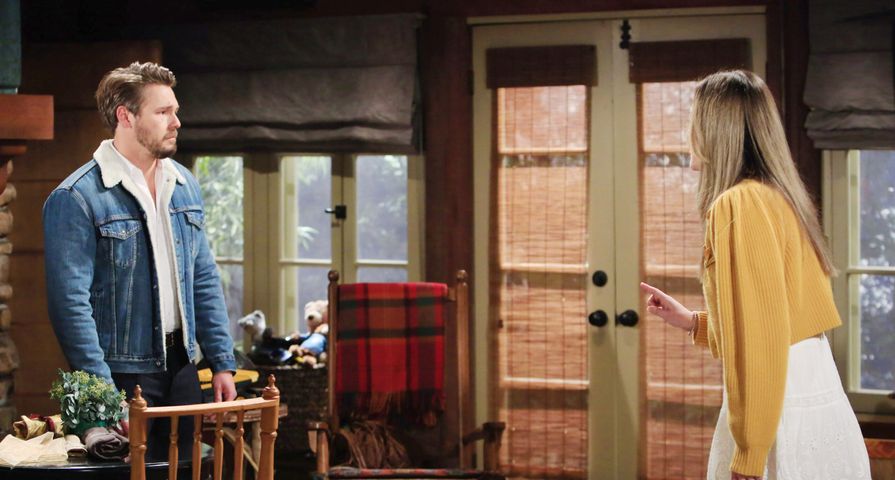 Hope will notice Liam acting odd and she’ll ask him what’s wrong, coming up this week on the Bold And The Beautiful (B&B). When Deputy Chief Baker interrupts a romantic moment between Bill and Katie, the Spencer Publications magnate will get angry. Also, as Sanchez and Baker speculate on suspects, Quinn will try to put the spark back into her marriage to Eric. Learn more below in the B&B spoilers for the week of April 19, 2021.

Spoilers tease that Quinn will continue to pester Carter, asking him to forgive Zoe. This will be the third time in a week that she’s implored the Forrester COO to give his ex-fiancé another chance. Carter asked her recently why she was going to bat for Zoe, and she said she could see herself in the model. Quinn also mentioned she believes in second chances; after all, Eric gave her one.

Speaking of Quinn, she’ll set up a romantic evening with Eric and hope for the best. She wants to renew the spark between she and her husband that has gone missing since she moved back in with him. Viewers will recall, on a recent episode, that Quinn told Eric she’d made a reservation for them at Café Russe. Unfortunately for Quinn, he turned her down, saying he had an important conference call. Will Quinn have better luck this time around?

After confiding in Ridge that he and Quinn seem worlds apart these days, he’ll tell his son the issue he has with his wife is trust. He saw her return to the dark side when she interfered in Ridge’s marriage to Brooke, and he didn’t like it one bit. Although she apologized, when Eric thinks about all the manipulating and conniving Quinn has done over the years, he’s not sure if she’ll ever really be able to stop scheming.

Eric will talk to his wife about the problems they’re having in their marriage, and why. He’ll tell her the truth – he has forgiven her for what she did to Ridge and Brooke, which is why he asked her to move back in with him. But he still doesn’t feel like he can trust her, which makes him uncomfortable every time he’s around her. How will Quinn react to Eric’s admission? Can she do anything to turn their relationship around?

When Hope notices Liam acting odd, she’ll ask him what’s going on. She knew he’d taken the news about Vinny’s passing hard. However, she also knows Liam was never close to Vinny and only met him a few times. So, when he continues to get upset when she mentions the drug dealer’s name, she’ll know something is very wrong. But will Liam tell her the truth when she questions him about it?

4. Dollar Bill To The Rescue

Bill will stop Liam from making a full confession to Hope. When she asks him what’s wrong, Liam will be ready to tell her everything. However, Bill will walk into the boardroom at Forrester Creations, interrupt Lope and drag Liam out of there — for his own good, of course. He knows his son is on edge and wants to tell the truth about what happened to Vinny; once they’re out of the building, Bill will tell Liam it’s too late for confessions.

When Hope admits to Thomas that Liam has been acting off for days, will it occur to him that his rival’s odd behavior began right around the time Vinny was killed? He may think it’s just typical of The Waffler. Thomas did mention to Hope recently he thought Liam was a weird dude. But on the flip side, he may begin to suspect Liam was the person responsible for the hit-and-run.

These days, Liam is like a fragile egg that is bound to crack the moment you touch it. Bill has been pressuring him to keep quiet and he has, although not without complaint. Yes, Bill can be a bully but the fact is, Liam is not a child. He should be capable of making his own decisions. He let his father push him into a tight corner and he’ll continue to unravel. But will he finally confess what he did?

Detective Sanchez and Deputy Chief Baker are looking at several possible suspects in Vinny’s untimely demise. They’ll contemplate who could have done it, discussing the drug dealer’s clients and the person who was supplying him with the drugs. They’ll also speculate about everyone who was affected by Vinny’s paternity tampering, including Thomas, Finn, Steffy and Liam. But will the two cops come to any conclusions? Keep watching B&B to find out!