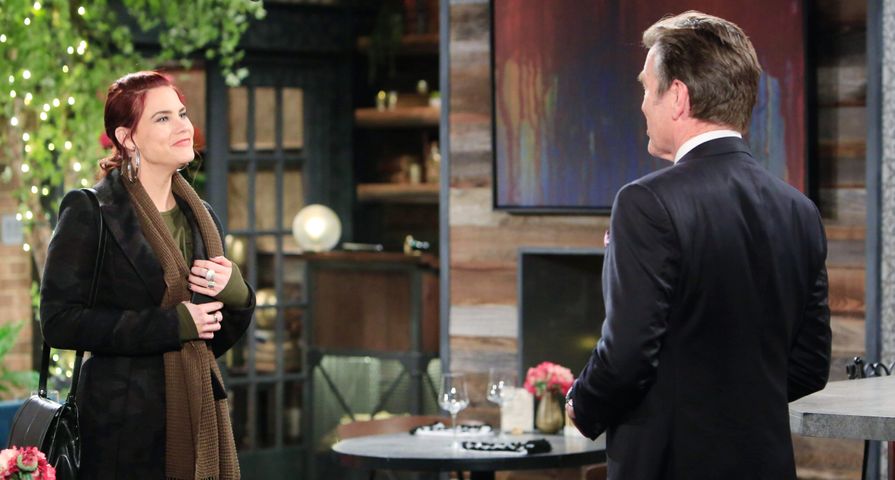 Calling all Young and the Restless (Y&R) fans! What’s on tap in the land of Genoa City over the next two weeks? Victor and Adam form an alliance, while Chelsea continues to make progress (and remains hush-hush about it), and Shey works hard to keep things together. Learn about these storylines and others in the below Y&R spoilers for March 8 to March 2021.

Y&R spoilers reveal that Adam and Victor will form an alliance the week of March 8th to compete against Billy Abbott. As the days go by, Victor will prepare for battle. It seems as if the move around snagging Ashland Locke’s media company from under Billy could unleash something even bigger. Is the Moustache prepared?

It’s been nice seeing Victor and Jack get along as of late; however, with all the Moustache and Adam are doing against Billy, Y&R spoilers promise something big on the horizon. It seems as if the “Newman versus Abbott” feud is set to re-ignite this week, and things could get very out-of-control in Genoa City if this happens. In added teasers for March 15th, Victor will have the last laugh (for now).

Actor Richard Burgi is set to arrive in Genoa City this week, playing the (already) infamous Ashland “Locke Ness Monster” Locke. He’s the owner of that media company both Adam/Victor and Billy are vying for. He also happens to be the husband of the woman Kyle had an affair with. Locke is sure to not only bring some intimidation to town but drama too! In other related teasers, Nikki will corner Adam the week of March 15th.

Speaking of the Locke Ness Monster, Y&R spoilers hint that Kyle will feel on edge this week, and Summer will do all she can to help distract him. Does this mean some steamy scenes between Skyle? In other Kyle news, he’ll be forced to cover his tracks in the coming days. Could this have to do with him trying to find out if little Harrison is his?

Over at Newman Enterprises, Y&R spoilers for the week of March 8th imply that Nikki will question Victoria this week. Seems as if this has to do with her decision-making at the company. As the days go by, both Lily and Vicky will react to Victor and Adam’s plot to steal Cyaxares from under ChanceComm. What will both ladies try and do?

Y&R spoilers imply that Vicky will try and reach out to Ashland on behalf of Newman on her own. This might be the reason why Nikki is questioning her daughter’s decision-making. As the days go by, Billy will be caught off guard by something Victoria does. In other news, Lily will unleash her anger on Victoria, the week of March 15th.

Across town, Y&R spoilers promise some major developments in Chelsea’s rehab, as Lawson starts to “speak” this week. Seems like she’ll continue to keep things on the down-low and not tell Adam. In other related teasers, Chloe will come to Chelsea’s rescue in the coming days. Could Adam be on to his love’s progress? Will Chloe help to hide it from him?

5. Shey Tries To Work Things Out

Y&R spoilers hint that Sharon and Rey will be committed and determined to work things out this week. Added teasers indicate that Shey will head out to their first couple’s therapy session in the coming days. Will this be a step in the right direction or a complete disaster for the two?

4. Devon’s At A Crossroads

Y&R spoilers reveal that Devon will feel as if he’s at a crossroads. He’ll realize he’s torn between his new love, Amanda, and his ex, Elena. As the days go by, he and Elena will have a chat, and they’ll struggle with closure. Could they decide it’s time to start over? In added teasers for the week of March 15, Nate will place his own best interests as a priority.

With both her sisters busy with their own drama, Faith will be looking for someone to help her out with a situation this week. Who will that “someone” be? Y&R spoilers hint that Auntie Lola will come to the young teen’s side in the coming days! Here’s hoping Summer and Mariah are grateful for Lola’s support!

With all that is going on, it’s hard to read what these next Y&R spoilers truly mean. The teasers suggest that Jack will take a risk in the coming days. Does this have to do with his relationship with Sally Spectra, or could it be linked to all the drama involving Billy, Adam, and the Moustache?

1. Abby Plans For The Future

Lastly, Y&R spoilers for the week of March 8th reveal that Abby will start planning for the future. Does this include baby toy shopping sprees or more legal meetings around surrogacy contracts? Could this involve setting up the Chancellor Mansion for Mariah and Tessa, or possibly setting up a baby’s room? Fans will have to tune in to find out!