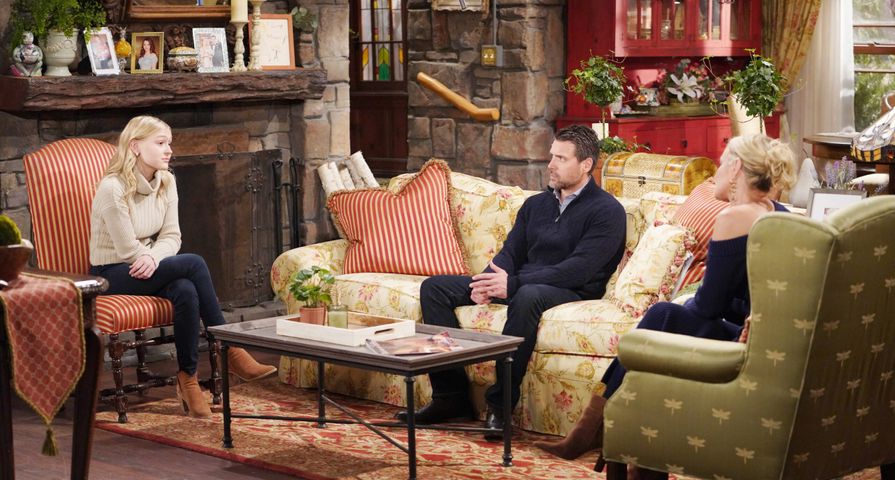 Calling all Young and the Restless (Y&R) fans! What’s on tap in the land of Genoa City for the next two weeks? A new face enters the picture, while a couple of familiar ones make a return. Mariah second-guesses herself and revenge is on the brain for both Chelsea and Victor. Learn about these storylines and others in the below Y&R spoilers for March 1 to March 12, 2021.

According to Y&R spoilers for the week of March 1, Kyle will run into Tara Locke (his ex whom he *believes* he has a child with) at Grand Phoenix’s lobby. Played by actress Elizabeth Leiner, the two will have a heated discussion when they reunite. Seems as if Locke will confirm that Kyle is Harrison’s bio dad, but she’ll also warn him to back off and not pursue this any further.

As the days progress the week of March 1st, Y&R spoilers hint that Summer will catch Kyle in “the act”. There’s a good chance that Kyle goes against Tara’s wishes and decides to pursue a DNA test or looks into his legal rights. Either way, Summer will find him doing something around this, and may question him on it. He’ll end up confessing the entire truth about Tara and Ashland Locke to Summer. How will she react?

Y&R spoilers reveal that Ashley will be back in the land of Genoa City this week! She and Victor will meet up to talk about their daughter and her baby-making plans. Ash won’t be the only familiar face onscreen in the coming days. Added teasers hint that Brittany Hodges will return to the little town, helping to offer legal advice to Mariah about her surrogacy plans.

Y&R spoilers for this week indicate that Mariah could start to have second thoughts around her surrogacy plans. Added teasers reveal that she and Tessa will feel a bit apprehensive around this new journey after talking to Britt. Could Mariah decide to back out on Abby, or will she end up going through with what she’s promised?

As the week of March 1st progresses, Y&R spoilers imply that things could fall apart for Abby. She’ll turn to Nina and Christine for support, but what exactly does this mean? Could something go wrong with her impending surrogacy plans? Does Mariah back out? Might this be about Devon? Added teasers for the week of March 8th hint that Hamilton will hit some crossroads.

Back to Victor, Y&R spoilers for the week of March 1st state that he’ll have some bad news for ChanceComm in the coming days, as well as Kyle. Does he strike up a deal with Ashland Locke? As the days go by, the Moustache will be focused on revenge, so Billy better watch his back.

6. Gearing Up For Battle

Y&R spoilers for the week of March 8th suggest that Adam and Victor will start to gear up for a fight. If Victor scores a deal with Ashland Locke, they both could start to focus on how to get back at ChanceComm (and Billy) for that article published some months ago.

5. Chelsea Ponders Revenge Of Her Own

Y&R spoilers note that Chelsea will also have revenge on the mind this coming week. She’ll start to “dream up” some ideas that could work for her. As the days go by, she’ll score some sort of victory in this regard. Lastly, added teasers for the week of March 8th state that her plans will start to formulate. What exactly does Lawson have in mind?

Speaking of Chelsea, Y&R spoilers for the week of March 1st relay that Chloe will stop at nothing to help her BFF. She’ll be especially determined to bring Adam down. She’s never trusted the man, and while her main objective is to help Lawson, screwing over Newman would be a consolation prize.

Y&R spoilers imply that Jack will be defensive in the coming days. Does this have to do with Sally? Speaking of Spectra, Phyllis will try and turn the tables on the young redhead in the coming days. Lastly, teasers for the week of March 8th note that Abbott will take a risk.

Y&R spoilers for this week note that Amanda will have a painful reminder about something that happened in the past. Could this have to do with her foster care days? In other related spoilers, Devon will try to hide his feeling of guilt. Sounds as if he’ll continue to lie to Amanda about his one-nighter with Elena.

Y&R spoilers reveal that Nick will go to great lengths to protect Faith in the coming days. While his teenager is spiraling, Newman continues to prove what an incredible dad he is. Speaking of Faith, Sharon will make a very hard choice the week of March 1st. Does this have to do with her marriage to Rey? Lastly, Lily will set Victoria straight at some point. Will Vicky cross a line with Billy this week?