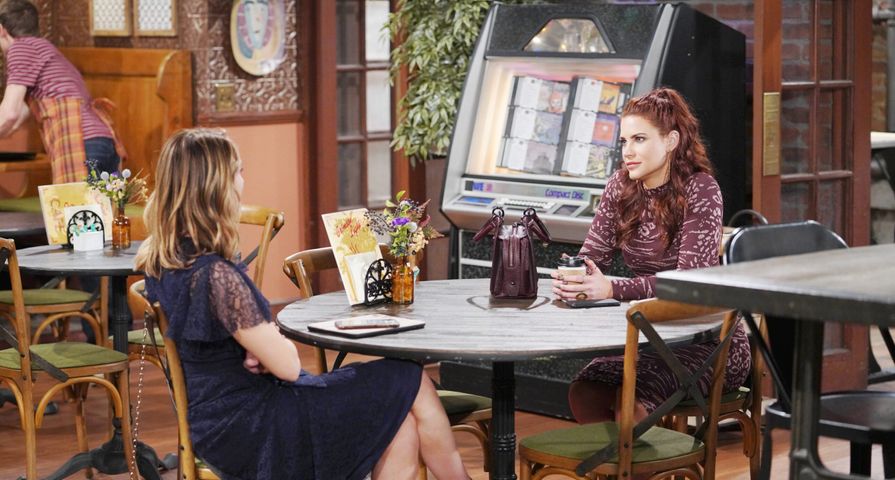 Calling all Young and the Restless (Y&R) fans! What’s on tap in Genoa City over the next couple of weeks? Ashland stuns Victoria with some unexpected news, while friction builds between Summer and Tara. Plus there’s more Bold and the Beautiful crossover fun on the horizon! Learn about these storylines and others in the below Y&R spoilers for June 14 to June 25, 2021.

Y&R spoilers are hyping up an unexpected plot twist, as Ashland shares some stunning news with Victoria, early this coming week. Sounds like he has a condition that means he could only have mere months to live. As the days go by, these two will have a charged and “romantic” moment, so it seems like these two could hit the sheets, sooner rather than later!

11. Victor Has Some Advice For Vicky

Over at the Abbott mansion, Y&R spoilers hint at some friction between Kyle’s lady love and his baby momma. Sounds like Summer will lose her patience with Tara in the coming days, and this will leave Kyle in a pickle. Will he choose sides or let the women resolve this all on their own? As the days go by, Summer will find Tara and Kyle in a “compromising” position. Sounds like Kyle will merely attempt to “comfort” Tara, but Summer won’t see it that way. It could end up being a big misunderstanding.

Well, sort of. Y&R spoilers note that Jack will offer Kyle some sage advice, while Red warns her daughter about Tara! Takes one to know one, and Phyllis will give Summer a heads-up on the manipulator she believes Tara to be. Either that or Phyllis overhears something that could offer some red flags about Tara. Meanwhile, in added teasers for the week of June 21st, Summer will feel threatened. This probably has to do with Tara and Kyle.

More Bold and the Beautiful (B&B) crossover fun this week, as Sally reaches out to Eric Forrester. Sounds like she’ll try and convince him to hire Summer, so she can be shipped off to L.A.! Considering the history between these two, will he take her advice without suspecting that she may be up to something?

7. Could Amanda Get Help From Victor?

Y&R spoilers indicate that Victor will offer Amanda some information. Sounds like it’ll be about her past. Could the Moustache be key in helping Sinclair solve the mystery of her dad’s passing? There’s a very good chance this could be the case. Victor can be crafty at getting to the bottom of things.

As the days go by, added Y&R spoilers imply that Naya will offer a stern warning to Amanda. What exactly is her bio family hiding? After last week’s confrontation with Sutton (and after Sinclair offered a solid defense), Naya and Ames seem to be very shady about things. Will the truth bring her closer to them when all is said and done, or will it divide them even more?

Y&R spoilers for the week of June 21st offer some added insight into this storyline. Sounds like Victor might help Amanda get to the truth, after all. Teasers note that Sinclair’s world will be thrown into a tailspin. Seems like she may get some added information about her father’s passing that will stun her. What could have her taken aback?

Meanwhile, it seems as if Imani may place a wedge between Elena and Nate. Or, will she fuel the fire that lingers between them? Y&R spoilers hint that Elena will try and test the waters with her ex this week; however, added teasers reveal that his heart may already be fluttering for Amanda’s half-sister.

By the time the week of June 21st hits, Nate might be saying, “Imani, who?”. Y&R spoilers indicate that sparks will be felt between Hastings and Elena again! But will they react to these feelings, or try and ignore them? They have already gone down this road twice, and both Elena and the good doctor might be gun-shy at the thought of giving round three a go!

2. Adam and Shey Make A Deal

Speaking of sparks, Adam and Sharon will come to an agreement this coming week. Will Rey be in the know about this, or will Shadam try and keep their meeting covert? Sharon and Rey have gone through too many obstacles to have secrets between them now, but when it comes to Adam, Sharon is always willing to risk anything.

Lastly, Y&R spoilers suggest that Christine will have news on Chance, and she’ll share it with Nina and Abby. Is he ok and coming home? Could this information be not-so-good news, like he’s passed away or missing in action? Fans will have to tune in to find out. Christine will give Chance’s mom and wife an update closer to the end of the week.