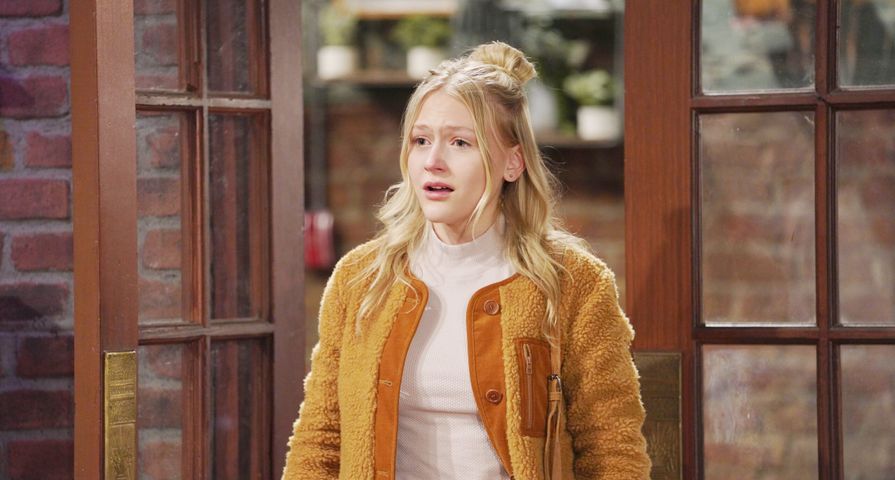 Calling all Young and the Restless (Y&R) fans! What’s on tap for the first two weeks of February Sweeps? Two characters will return; a familiar face will reappear in the land of Genoa City; and one character will leave quietly. Also, there will be more Vicky, Billy, Lily drama (with a shot of Victor) on the horizon. Learn more about these storylines and others in the Y&R spoilers for February 1 to February 12, 2021.

On Sunday, January 31st, actor Donny Boaz posted huge news on his Instagram about Chance Chancellor. According to the post, he stated that Chance’s last episode would be Monday, February 1st. As per Boaz, Chance will not pass away, leave town, or be replaced; rather, he simply “won’t be there” anymore. What does this mean for Chabby? It’s hard to say. Chance will be given some sad news on Monday by his doctor, which will add an even further negative spin to them trying to expand their family. Mom Nina (Tricia Cast) will come for a visit on the February 4th episode this week. Will Nina lend some support to Abby?

Y&R spoilers reveal that Mariah will be able to sense “trouble” down the road. Could she have some reservations around being Chabby’s surrogate? She could feel that all this might lead to unnecessary drama. What if she can’t carry a child herself, or she does something (accidentally) to jeopardize the baby’s health? She may feel as if this isn’t a can of worms she wants to open. The good news is that Abby and Mariah will reach an understanding of the surrogacy request. Will Mariah give her okay, or will Chance’s “news” pull the plug on everything?

Y&R spoilers reveal that Theo Vanderway will return to Genoa City this week, as actor Tyler Johnson reprises his infamous role. He’ll approach Sally with a secret he has on Kyle, and it seems as if Specta will have zero issues on exposing it. In other added teasers, Sally will question if keeping something from Jack will end up biting her in the butt.

9. Kyle’s Past Catches Up With Him

Whatever Theo has on Kyle, it’s a secret from their old days in New York that has never been exposed. According to Y&R spoilers, Summer isn’t aware of this dark shadow in her boyfriend’s past, and the secret surfacing will have some repercussions around the Skyle relationship. What kind of dirt has Sally dug up?

Sally better be careful. While Summer is a threat, she’s nothing compared to her mother, and Phyllis can turn into a major momma bear when it comes to her cubs. Y&R spoilers for the week of February 8th hint that Sally and Red will “spar” that week. Can Spectra handle whatever Phyllis throws her?

In some fun Y&R spoilers, actor Don Diamond (ex-Brad Carlton and current B&B Bill Spencer) is set to return to the land of Genoa City the week of February 8th. The Bold and the Beautiful’s (B&B) Bill Spencer will probably be in town to visit Summer and secure the joint venture between JVC and Spencer Publications, but here’s hoping Bill runs into some of Brad’s old friends and exes. It would be fun for anyone to imply that Bill “looks familiar.”

Across town, Vicky will wonder what could’ve been or what could be this week. Is this about Billy? Added Y&R spoilers suggest that Victoria will re-examine her past with Billy, and feel even more confused. Speaking of “confused,” Billy-boy will feel as if he’s getting mixed signals from two ladies … could this be both Vic and Lily? Lastly, Lily will turn to Amanda for some advice.

5. The Moustache Gets Involved

Elena might feel as if she’s stuck in the movie Ground Hog Day this week, as Y&R spoilers indicate that she’ll struggle with a secret. This sounds familiar! Perhaps this has something to do with her one-night stand with Devon recently? In other news, Elena will aim to protect Hamilton in the coming days, and added teasers reveal that he’ll have a meeting with Nate this week to discuss Moses. Spoilers for the week of February 8th reveal that Elena will get “treated” to a romantic evening by Nate. Boy, is she sure to feel even more guilty after that!

Across town, Y&R spoilers hint that Sharon will be “forced” to act when she joins the efforts around Chelsea’s recovery this week. Added teasers imply that Lawson will be pushed too far while Mrs. Rosales is around. Could Adam’s plan backfire? Could Chelsea take two steps forward in recovery, and then two steps back?

Y&R spoilers state that Nikki will try and help Faith this week, but it won’t go as planned. Added teasers imply that her granddaughter will “balk” at any of her attempts in the coming days. Have Nick and Sharon jumped the gun too soon? Will all this fuss push Faith deeper into drinking and rebelling?

Y&R spoilers for the week of February 1 reveal that Gloria will try and convince Lauren to give her a second chance again. Will the convincing work? Added teasers seem to hint that Lauren will “shake” things up at Fenmore’s … so does that mean that Glo could get Sally’s job while Spectra is promoted? A sneak peek into Y&R spoilers for the week of February 8th promise that Nick will work to keep his brother Adam on the “straight and narrow.” Will he decide to extend an olive branch in the process?