Katie Thurston has found love after a long, emotional journey on The Bachelorette!

Last night’s finale episode showed Thurston getting engaged to her final contestant, Blake Moynes. She recently opened up to PEOPLE about her time with Blake following the show’s close and revealed that the couple’s relationship has grown even stronger.

“We’re opposite in the kinds of movies we like — I like scary, he doesn’t,” Thurston shared with PEOPLE. “And we talked about our love languages — I’m words of affirmation and he’s physical touch, let’s be honest!”

On a more serious note, Katie revealed that everything happened for a reason to have her end up where she did. “I have no regrets,” says Thurston, “What we went through has really strengthened our relationship. The struggles were worth it.”

Thurston also revealed while she did speak casually with Blake over DMs before the show, it was really their in-person meeting that made her realize the chemistry between them. Prior to the show, “we had talked very casually in DMs,” Thurston revealed. “I thought he was hot, but I didn’t think much of it. When I met him in person, something about his energy shifted my mind completely. I knew this was going to be a strong relationship.”

Thurston also opened up about the journey going forward with Moynes and said they are “more in love” than ever. “We think the same way about the world,” she says. “Blake is passionate and funny and I feel so confident in what we have. I’d do it all over again if it meant I’d get to be with him.” 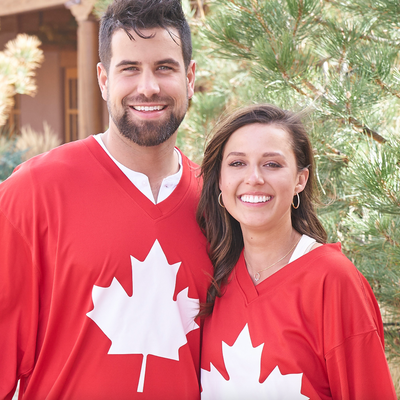