Teresa Giudice Storms Out Of Interview After Being Asked About Husband 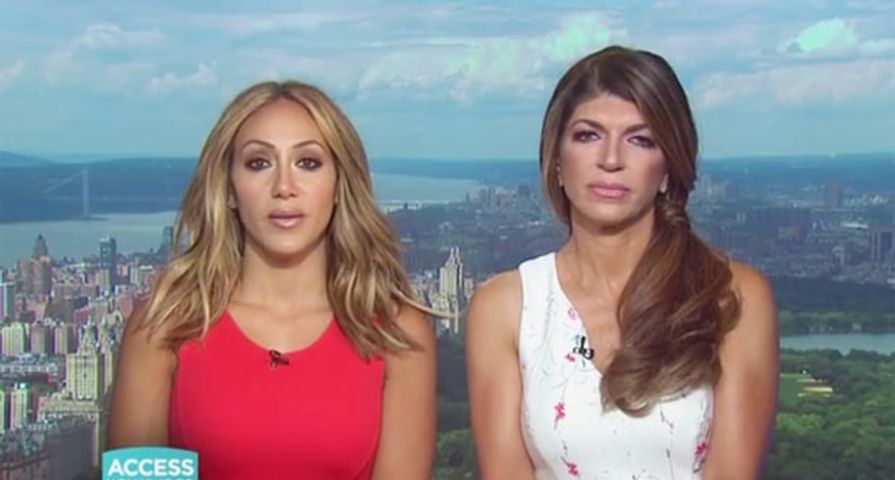 For a reality star, there was one reality that Real Housewives of New Jersey’s Teresa Giudice didn’t want to talk about.

During a live TV interview on Thursday, July 14, Teresa Giudice refused to answer questions regarding the possible deportation of her husband. Joe Giudice is serving at least 36 months at New Jersey’s Fort Dix Correctional Institution after being found guilty of fraud and conspiracy. Joe may face deportation after he’s completed his prison sentence.

Giudice and her sister-in-law, Melissa Gorga, sat down for an interview with Access Hollywood Live when co-host Dave Karger asked, “Do you worry that it’s the end of your family unit as you know it because there is all this talk that Joe could be deported since he’s an Italian citizen. Do you think about that?”

Unhappy with the question, Teresa replied, “Next question please. I don’t think that’s something you should be asking.”

“Well everybody’s talking about it, and it could be a reality,” replied Karger’s co-host Kit Hoover.

Hoover quickly fired back at Giudice’s comment: “Okay, well it is a fact and we’re probably going to see it on the show so I don’t think that was a rude question.”

Angry with the interview’s co-host, Giudice snapped back. “No, you’re not gonna see it on the show. As a matter of fact, I’m going to leave.”

She promptly took off her microphone and stormed off the set. Gorga followed behind.

In a later interview with New York Live, Giudice said she would not discuss the issue about her husband’s deportation in any interviews.

“I’m not going to address it. It’s nobody’s business. It’s a legal matter, and I’m not addressing it. So if anybody asks me, going forward from here, I’m going to walk off…so don’t even try it. Because they’ll just make it worse.”

She also revealed that she was naïve to assume that some parts of her life would still remain private, despite being a reality star.

“Everything that happened to me, being in the public eye, unfortunately made it worse for me. And I feel like if I wasn’t in the public eye, who knows what would have happened,” she revealed in the interview. “Unfortunately, when I first got into this, I didn’t know all of this was going to happen, and I got into it for fun, not to be scrutinized and to be jabbed at, to be under a microscope. Like, I didn’t know anybody in Hollywood or California. I mean I grew up in Jersey! So I didn’t know about any of this. So I really got into it blindly and I was very naïve.”