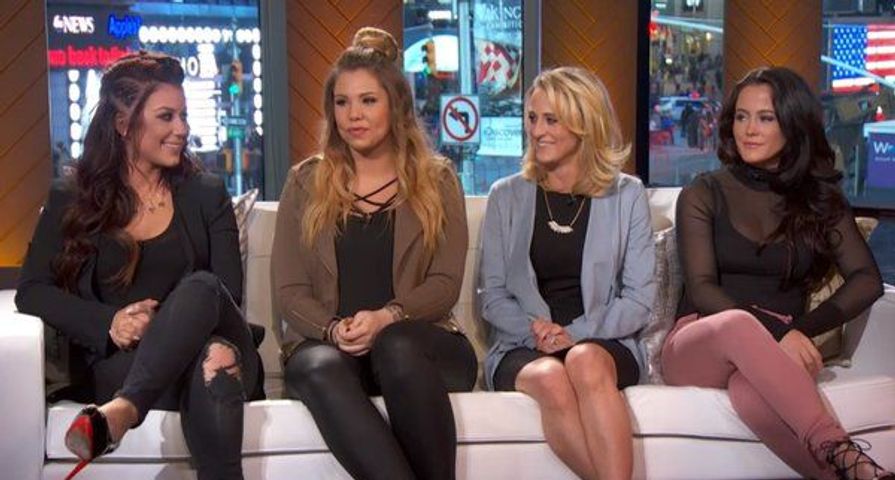 By now, Teen Mom fans are well aware that the reunions offer some of the most intense drama out of the whole season, and it seems the upcoming Teen Mom 2 reunion episode is going to be the craziest yet!

Over the weekend, the Teen Mom 2 cast including kids, parents, and significant others flew to L.A. for the reunion show taping and it is safe to say things got extremely out of hand and it all seemed to be surrounding star Jenelle Evans and her husband David Eason. According to The Ashley, Eason pulled out a knife after becoming enraged during the filming of the “end-of-year” party on Friday, October 20 and took out his anger on a bunch of decorative balloons. A source told the outlet,“All of the cast was drinking and having a good time while filming this party, which will be used during an end-of-the-year clips show featuring both casts. David was acting too drunk and the producers noticed it. They cut him off at the bar. When David found out they wouldn’t serve him more alcohol he got super mad.”

The source added that naturally everyone was “freaked out” and it changed the security around filming. “Before filming started today everyone– cast, crew, audience– had to go through a security checkpoint, get patted down and wanded and have their bags checked,” the source said. “The cast and crew have never had to do this before really. The production staff doesn’t want to take any chances now. Things get really intense on these sets and they can’t have someone possessing a weapon of any kind.

If that wasn’t enough, during the filming of the actual reunion show the next day, things reportedly got even worse. According to The Ashley, a major fight broke out backstage and shut down production for some time. “Most of the cast was in various green rooms backstage and the kids were all running around playing together,” a source said. “The fight started when Nathan’s girlfriend [Ashley Lanhardt] was walking past the room Barbara [Evans] was in. Barbara hugged Ashley goodbye and Jenelle saw it and came bursting out of the room.” After Jenelle’s outburst things got out of control as Nathan and David Eason became involved. “The kids were all running around during this huge fight, and someone in the cast grabbed Kaiser and took him away from the scene,” the source said. “Because the fight was in the hallway, some of the other cast members were basically trapped inside the rooms they were in. Some of the other parents were really concerned and barged out of the green rooms to find their kids and bring them somewhere safe.”

The Ashley also reported that the entire fight was filmed, so odds are fans will be seeing at least clips of it. After both incidents some cast members were reportedly questioning the safety of their kids, and both Jenelle and Nathan took to their social media accounts, confirming the fight did happen but offering different stories.