While Clare Crawley’s journey on The Bachelorette may not have been typical, she did get her happy ending!

During Thursday’s episode of The Bachelorette, Crawley got engaged to Dale Moss, who had stood out to her as a frontrunner since night one.

During the episode, Crawley chose to spend one-on-one time with Moss rather than having a rose ceremony with the other men. After the dinner portion of their date, the pair spent the night together and exchanged I love you’s, which Clare shared with Chris Harrison in the morning.

“When you got here, it was like electricity for me because I knew that I had just met my husband. You embodied everything that I want in a man,” Crawley told Moss the next night. “I’m just so in love with the man that you are.”

Moss then opened up about his love for her as well. “From the moment I stepped out of the limo, this was special,” he said. “I know without the shadow of a doubt that you would go to the end of the world for me and I’ve never had that. I’m so grateful for that. … I’ve thought a lot about my mother and what she would think about you. She would absolutely love you. All she’s ever wanted for me is someone who loves me unconditionally and who would be there for me no matter what. I know that I have that. And I love you.”

Crawley replied, “I love you too. … The best is yet to come,” before Moss got down on one knee to propose. “Put that ring on my finger, I’ve waited a lot of years for this,” she said. When he did, she then called herself “Clare Moss.”

To find out what happens next on The Bachelorette, be sure to tune in next week where Tayshia will take center stage to pick up where Clare left off. The Bachelorette airs on ABC Tuesdays at 8 p.m. ET. 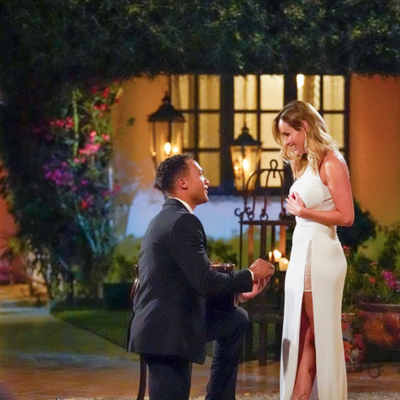