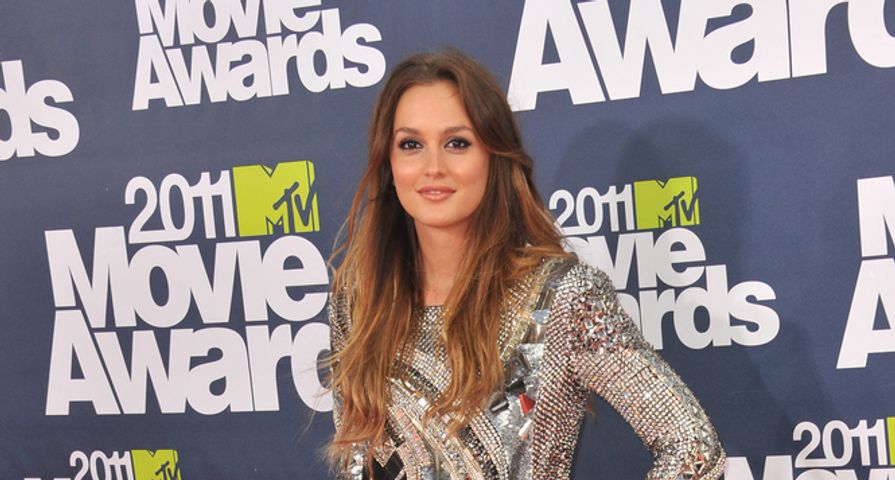 Leighton Meester won our hearts playing the manipulative but lovable Blair Waldorf on CW’s “Gossip Girl.” On-screen, her character is a bona fide fashionista, so naturally Meester has been working hard off-screen to establish herself as an up-and-coming style star in her own right. Leighton, 28, is a renowned actress, a bonafide fashionista and a budding songstress. The “Gossip Girl” star hasn’t been a fixture on the red carpet for long, but we think she has come a long way since she first rose to superstardom. Come take a look at Meester’s fashion evolution!

A young Leighton Meester attended the premiere of “Man of the Year” wearing a red tank top with black slacks and black heels. Even though there is nothing remarkable about her outfit, we think she wears it well. At this point, Meester was finding steady work as an actress, but she had yet to land her breakthrough role. In 2005, Meester had a regular role in the series “Surface” and she appeared in two more movies in 2006, “Flourish” and “Inside.”

The naturally blond actress looked lovely at the 2007 Crystal and Lucy Awards in this colorful maxi dress with a fitted bust. 2007 was a great year for the rising star. Leighton Meester landed her breakout role on CW’s “Gossip Girl” and she earned rave reviews for her performance as the wealthy, privileged and excessively manipulative Blaire Waldorf. She was also getting a lot of attention for her character’s amazing wardrobe.

Leighton Meester was looking chic at the Los Angeles Film Festival screening of “The Beautiful Ordinary” in this little black cocktail dress. She was fast becoming a style star off-camera. According to Meester, her mother is one of her style icons. “She gave me a bunch of cool ‘70s and ‘80s clothes. The only time I ever get complimented on what I’m wearing in my daily life is when it’s one of her pieces, so I’m thankful she kept it all.”

The “Gossip Girl” star attended the CBS, CW and Showtime Press Tour Stars Party wearing this grey Zac Posen asymmetric stitched dress with a pair of patent blue Sergio Rossi pumps in 2008. Leighton is proving herself to be quite gifted when it comes to her fashion sense, but she is a lot more than just a budding style icon – she is also an incredibly talented young actress. According to New York magazine, “Her villain-you-want-to-root-for is the most sophisticated performance on the show.”

Opening Night of the Metropolitan Opera – 2008

Leighton Meester rocked a mustard colored Yves Saint Laurent Bustier dress with a fringe waistline for the opening night of the Metropolitan Opera. Even though she dresses up a lot on-screen, the up-and-coming actress prefers dressing casually. “I wear what I like and what reflects my personality. I’m a pretty casual person; I like to be casual, especially when I have to go to work and dress differently. You know, jeans and T-shirts. I’m an easy-dress type of person,” Meester told Glamour.

The breakout star chose an edgy ensemble for the 2009 Teen Choice Awards where she won the award for Choice TV Actress. She wore a black and white striped Louis Vuitton mini dress with a layered skirt, red Brian Atwood heels, Cathy Waterman jewels and a Nina Ricci clutch. Leighton spent some time in 2009 focusing on her music career. She released “Good Girls Go Bad” with Cobra Starship and “Somebody to Love” with Robin Thicke.

Leighton looked absolutely gorgeous in this Cushnie Et Ochs marble print dress with pewter platforms at KIIS FM’s Jingle Ball. Even though she plays a really pretentious, uptight character on “Gossip Girl,” she comes off as really down-to-earth in interviews. “You can’t count on success in this business,” Meester said. “And anyway, being famous or rich or making a certain kind of movie – none of that means ‘success’ to me. Success to me is being happy and fulfilled, truly fulfilled, and being proud of myself and doing different things all the time. So thus far, yes, I’ve been successful.”

The rising star donned a beautiful black and maroon asymmetrical crochet dress with maroon Salvatore Ferragamo pumps and Cathy Waterman jewels at the premiere of “Country Strong” in 2010. While the film received mixed to negative reviews, Leighton Meester’s performance was praised by critics. “But Meester is the best thing in the movie. She’s just doing Reese Witherspoon’s June Carter Cash in “Walk the Line’’ with dabs of Miley Cyrus and Kellie Pickler. But it’s not an impersonation; it’s a performance with its own comedy and sweetness,” The Boston Globe wrote.

Leighton Meester looked absolutely stunning at the 2010 Teen Choice Awards in this long-sleeved, embroidered Emilio Pucci minidress with Cathy Waterman jewels and Christian Louboutin mesh embroidered peep-toe heels. While the jury is still out on the shoes, we love, love, love the dress. Meester is fast becoming one of the more stylish stars on the red carpet. Although we aren’t always into the shoes that she chooses, we think her dresses are amazing.

The “Country Strong” star was looking her best at the 2011 MTV Movie Awards. She proved once again that she has great fashion sense by donning this Balmain dress from the Fall/Winter 2011 collection, black Pierre Hardy heels with silver embellishments, a Paco Rabane bag and Bulgari jewels. The bulge beads and bedazzling embellishments are what make this dress so amazing. We think this is one of her best looks yet.

“The Oranges” star attended the premiere of her film “Life Partners” wearing an Emporio Armani Spring 2014 metallic blue shift dress with a ribbed skirt in a darker shade of blue. She completed the look with nude Emporio Armani double strap sandals and a grey satin clutch. 2014 was a really exciting year for Leighton Meester. She married Adam Brody, who she had been quietly dating since February 2013, in an intimate ceremony.