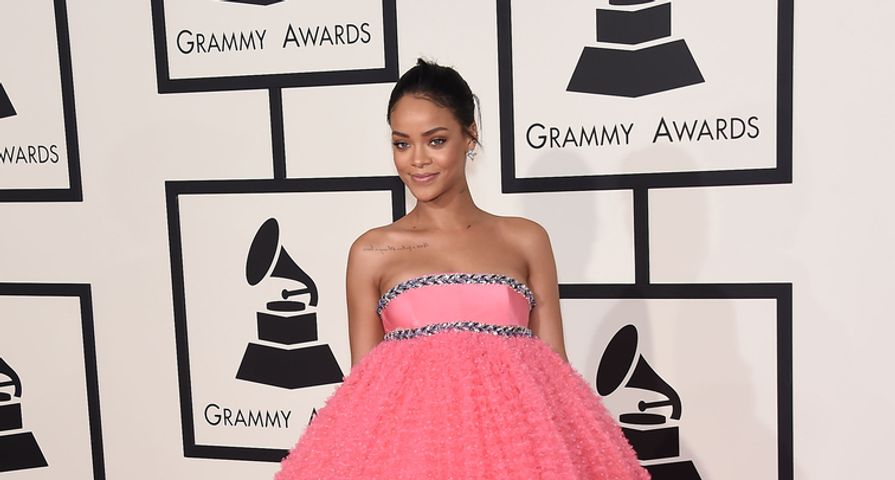 Rihanna comes off as pretty fearless, especially when it comes to her sense of style. When she was first starting out, she typically played it safe when it came to her wardrobe. She tried to look the part of the innocent young pop star, but she got pretty bored with it. We see her as the sort of person who likes to take risks and push limits. Every so often, she will doll herself up, but she prefers to play by her own rules. Because there is no else who has style like Rihanna on the red carpet today, we figured that now would be a good time to take a look at her fashion evolution!

Rihanna didn’t really have a sense of style back in 2005. She showed up at the 33rd Annual American Music Awards’ nominations dressed casually in a short green dress and a pair of brown boots. This isn’t the best outfit we’ve seen on a budding pop star, but it isn’t offensive either – it is just boring.

While her fashion didn’t leave much of an impression, her music certainly did. During the summer of 2005, her first single “Pon de Replay” became a massive hit. It peaked at No. 2 on the Billboard Hot 100. She then went on tour with Gwen Stefani to promote her debut album Music of the Sun, which went on to sell over two million copies worldwide. The album received mixed reviews from critics. The Rolling Stone gave it two and a half stars out of five, noting that it lacked replay value, ingenuity and rhythm, while Slant Magazine described her lead single“Pon de Replay” as a dancehall-pop mixture that owes plenty of its sweat and shimmy to Beyoncé’s ‘Baby Boy.’”

The “Pon de Replay” singer rocked a short purple dress with a plunging neckline at the 2006 Teen Choice Awards. The dress is cute enough, but we know now that it was never really her style. Someone else probably decided that she would wear this and she really didn’t have much of a choice in the matter.

The Teen Choice Awards that year weren’t as much of a success for Rihanna as one would have hoped. Critics complained that she lip-synched through her entire performance that night. She sang her latest hit single “SOS” and some people noted that it sounded exactly the same as it does on the radio. She hinted to MTV that performing at an event like this was a big deal, so maybe she was just nervous. “It was a big thing for me,” she said. “But the highlight for me was Kevin Federline’s performance. And seeing Britney. She’s so cute!”

Rihanna looked smoking hot at the 2007 BET Awards. She donned this white form-fitting Herve Leger dress, which featured a sweetheart neckline, with Christian Louboutin shoes, a ring from Bochic and a Campise necklace. This is one of our favorite dresses on her. It really highlights her fabulous curves.

Shortly before she and Chris Brown became a thing, the “SOS” singer was reportedly hooking up with Josh Hartnett. At the World Music Awards in Monte Carlo, she gushed about him to the press. “He is so hot and he is really sweet to me,” she told reporters. “When we hang out it feels right – even though it’s pretty new. I would be lying if I told you we were not more than just friends… I have so fallen for him, he’s lovely.” Shortly after this, Rihanna denied any romantic involvement with “The Virgin Suicides” actor, claiming that the two were just friends.

The “Umbrella” singer went for an edgier look at the 21st Annual Kids’ Choice Awards. She wore a pink and black polka dot bustier from H&M with Stella McCartney jeans and studded cuffs. She also debuted a short crop cut. Her style was really starting to change at this point and that wasn’t the only thing was changing.

In 2008, Rihanna’s ex business manager announced that, despite all of the singer’s number one hits, she only had $20,000 left in the bank. Her management team had reportedly been using money from her endorsement deals to fund her albums and videos. Since her albums had failed to sell as expected, her team was trying make her more popular by putting her albums out more quickly. Her ex manager realized that it wasn’t working and that it had put Rihanna in a precarious financial position. When she told the singer about it, she was fired.

At the American Music Awards, Rihanna rocked this dramatic strapless black and white laser cutout gown by Marchesa. A dress like this wouldn’t look good on just anyone; however, she has the right amount of attitude to pull it off. We personally would have opted for black pumps instead of white, but that’s just our opinion.

2009 wasn’t an especially good year for Rihanna. The night before the Grammy Awards, she and her boyfriend-at-the-time Chris Brown got into an argument that turned physical. She was left bloodied and bruised as a result. She initially got back together with him following the incident; however, they quickly broke up. Rihanna realized that she wasn’t sending a positive message to her fans. Brown did his best to sound contrite; however, it didn’t last long. He felt that the situation was blown out of proportion. Her injuries told a very different story though.

The “Only Girl (In the World)” singer wore an asymmetrical tulle dress from Viktor & Rolf with nude Christian Louboutin pumps, Loree Rodkin rings and Georgina Chapman for Garrard earrings to Clive Davis’ Pre-Grammy Party. The dress is pretty out there. Parts of it seem overly embellished. Only someone like her could really pull it off without making it look too weird.

After ending things with Chris Brown, Rihanna spent 2010 playing the field. She settled on Matt Kemp, a Los Angeles Dodgers outfielder. They dated for close to a year, but broke up by the end of 2010. Sources say that it was never too serious between them – they were both looking to just have some fun. Unfortunately, her busy travel schedule made things difficult for him. He told people that he wanted something more normal and he knew he wasn’t going to get it from her. Like a pro, Rihanna quietly picked up and moved on.

Rihanna looked lovely at the Launch of her first fragrance Reb’l Fleur. She wore this Prada ensemble, which included a metallic cropped long sleeve cardigan with a printed bell-shaped skirt. She accessorized with gold hoop earrings and nude Prada ankle strap pumps. This is a really cute outfit but, like everything Rihanna wears, it still has an edge to it.

Rihanna was really playing the field after her breakup with Matt Kemp. She was linked with Ryan Phillippe, Colin Farrell and Usher. That same year, in an interview with Rolling Stone, the good girl gone bad talked about her sexual preferences. “I like to take charge, but I love to be submissive. Being submissive in the bedroom is really fun. You get to be a little lady, to have somebody be macho and in charge of your sh*t. That’s sexy to me. I work a lot, and I have to make a lot of executive decisions, so when it comes to being intimate, I like to feel like I’m somebody’s girl,” she said.

The “We Found Love” singer went for a more simple look at the 2012 MTV Video Music Awards. She wore this white custom-made Adam Selman dress with Neil Lane jewels, Jacquie Aich rings and nude Manolo Blahnik sandals. We think that this is one of her best looks yet. She really doesn’t need all of the attitude or the crop tops to look sexy.

In 2012, Rihanna did what many consider unthinkable – she got back together with Chris Brown. At the MTV VMAs, they made their relationship public. He gave her a congratulatory kiss after she accepted her award for Video of the Year. Many people were concerned; however, she was intractable. “People end up wasting their time on the blogs ranting away, and that’s all right…Because tomorrow I’m still going to be the same person. I’m still going to do what I want to do,” she told Elle magazine.

Launch of the Rihanna for River Island collection at DSTRKT – 2013

Rihanna attended the after party following the launch of her Rihanna for River Island Collection wearing Dark Wash Double Top Straight Jeans with a white crop top. It is almsot impossible for her to look bad. Most people could never get away with dressing like this, but she has the right attitude and the right body.

Rihanna and Chris were still an item in 2013; however, it didn’t last. After the breakup, he discussed the breakup with Australia’s 2Day radio show “The Kyle and Jackie Show.” “The way I look at it is, I am always going to love that person,” he said. “But people have differences and people have different wants and needs. And at the end of the day, she’s a young girl. I can’t really be focused on wife-ing somebody that young…I just need to fast forward and be a man and be the best Chris Brown I can be, instead of worrying about whoever else is going to be in my side pocket,” he said. We think she’s better off without him.

The “Shut Up and Drive” singer hosted the First Annual Diamond Ball or the Clara Lionel Foundation wearing this Zac Posen Fall 2014 off-the-shoulder gown. She accessorized with a Chopard tourmaline and diamond necklace and a matching ring. This is definitely one of her more glamorous red carpet looks. We want to see more of this!

According to Rihanna, Princess Diana is one of her style icons. “You know who is the best who ever did it? Princess Diana. She was like – she killed it. Every look was right. She was gangsta with her clothes. She had these crazy hats. She got oversize jackets. I loved everything she wore,” she told Glamour magazine. She also really likes Nicole Richie’s style. “Oh my God, are you kidding me? Nicole Richie. She p*sses me off. She’s so good,” she said. We find this kind of amusing because she doesn’t really dress like either of them. Her style is much more flashy.

Rihanna showed up at the 2015 Grammy Awards wearing a double-tiered Giambattista Valli dress. The only thing that was tight on the dress was the bust. It almost looked like she was hiding something in the dress – it puffed out so much. For all we know, Leonardo DiCaprio could have been hiding under there.

The Barbados beauty has been linked with a number of Hollywood’s hottest bachelors over the years. Most recently, she has been linked to DiCaprio. Sources say that they have been hooking up for years. They reportedly rang in the 2015 New Year together in St. Barts, spent Valentines Day together and he is said to have helped organize her birthday party. Neither of them has confirmed anything; however, we are inclined to believe that there might be some truth to this given that Rihanna doesn’t have the best taste in men. DiCaprio is a step up from Chris Brown, but he’s a notorious modelizer, which makes him an unsuitable romantic partner (in our opinion, of course).