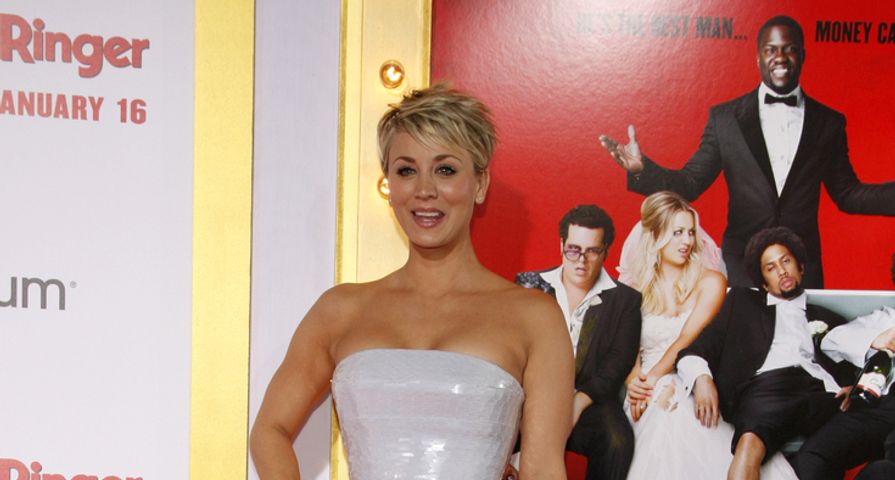 Kaley Cuoco has become pretty darn famous thanks to her role as Penny on The Big Bang Theory; however, she made a name for herself as a television actress long before that when she was starring on the show 8 Simple Rules. Kaley has come a long way since the early 2000s, both professionally and in terms of her fashion choices, which is why we have a slideshow of her fashion evolution for your viewing pleasure:

Kaley Cuoco showed up at the world premiere of Freddy vs. Jason looking a little like a young Britney Spears. She wore a pair of low-rise flared blue jeans with a sash tied around the waist and a tummy shirt that read, “Mary is my homesgirl.” Classy, Kaley. Classy.

The 8 Simple Rules star rocked this pink slip-like gown at the 30th Annual People’s Choice Awards with matching pink heels. We gotta admit – she looks good in pink; however, we still don’t really like the dress. She was a semi-successful actress – she could have found something a bit better.

Kaley Cuoco attended the 12th Annual Race to Erase MS Gala in this orange cocktail dress, which featured an empire waist. While she doesn’t look awful in orange, the cut of the dress is anything but flattering on her. It seems to add an extra 10 pounds to her frame, which isn’t actually there.

The television actress went for a low-key look at the L.A. premiere of Standing Still. She rocked this colorful peasant top with a pair of skinny jeans. The top is best part of the outfit. The jeans don’t really fit well around the calves and the shoes don’t match at all.

Kaley Cuoco wore this shapeless white dress during the TCA 2007 CBS Summer Press Tour. Given how she looks in a crop top, this dress was not a good idea. She needs something that pulls in at the waist and shows off her slender physique.

The Big Bang Theory actress attended the CBS CW Showtime Press Tour Stars Party wearing this shapeless, blue, sateen dress. Although the dress has some pretty silver details, it isn’t at all flattering and makes her look wider than she actually is.

Kaley Cuoco rocked this colorful little cocktail dress at the 44th Annual Academy Of Country Music Awards. The only issue with we have with the outfit is with the shoes. Why would she choose grey pumps? There is absolutely no grey in the dress!

The former Charmed actress attended the People’s Choice Awards in this classic white strapless gown by Catherine Deane. Although it’s a little too much like a wedding dress, at least it shows off her killer figure (and concealed her broken leg).

Kaley Cuoco looked like a Disney princess in this mint green Romona Keveza gown that she wore to the 18th Annual Screen Actors Guild Awards. The gown featured a wrapped sweetheart neckline and a textured floating ball gown skirt and she finished the look with a lovely braided hairband.

The Academy of Country Music Awards – 2013

The gorgeous actress wore a geometric black and nude BCBG dress to the Academy of Country Music Awards. The dress was definitely a smart choice; however, the hairstyle, that silly-looking pompadour, was not.

At the QVC 5th Annual Red Carpet Style Event, Kaley Cuoco donned a Spring 2014 jacquard silver-and-cream striped crop-top and skirt by Jonathan Simkhai and completed the look with silver accessories. All in all, this isn’t a bad look for her. We just wish she did something different with her hair.

The television actress looked amazing at the L.A. premiere of The Wedding Ringer in a light grey strapless KaufmanFranco Fall 2014 sequin dress, which she paired with patent leather heels and a silver clutch. The only thing we would change is the hair – the cut doesn’t suit her!

Kaley Cuoco showed off her abs in this black Romona Keveza cutout dress, which featured a mesh overlay, with Jimmy Choo shoes and Lorraine Schwartz jewels. Again, the only issue with this ensemble is the hair. With the bun on top, it looks way too severe!