Kylie Jenner is the youngest of the Kardashian-Jenner klan. She has always been quite the cutie, with her dark brown hair, brown eyes and perfect facial structure. She has a lot of natural beauty, which we wish she could see. When it comes to makeup and fashion, she seems more influenced by her half-sisters than her older sister Kendall. She used to dress all cute and sweet, but not anymore. She loads up on the makeup and rocks some pretty tight and revealing clothes. She’s still young though, so she can easily turn it around. Since Kylie is such an influence on young girls everywhere, let’s take a look at her fashion evolution!

Kylie Jenner attended the premiere of “Easy A” in this short black dress that featured grey accents. She made sure to wear a push-up bra underneath. It looks like she probably stole the dress from one of the Kardashian girls. She was just 13-years-old at this point and she was dressing like she was in her mid 20s. It seems as though she was always in a rush to grow up. Remember when she was pole dancing on the premiere of the family’s reality TV show? She was only nine then!.

Kylie was already starting to model at this point, just like her older sister, Kendall. Kylie was modeling for Sears though while Kendall was a bona fide bikini model. It must have been hard for the youngest member of the Karashian-Jenner klan growing up. Her older sisters probably seemed perfect, especially Kendall, who obviously won the genetic lottery. 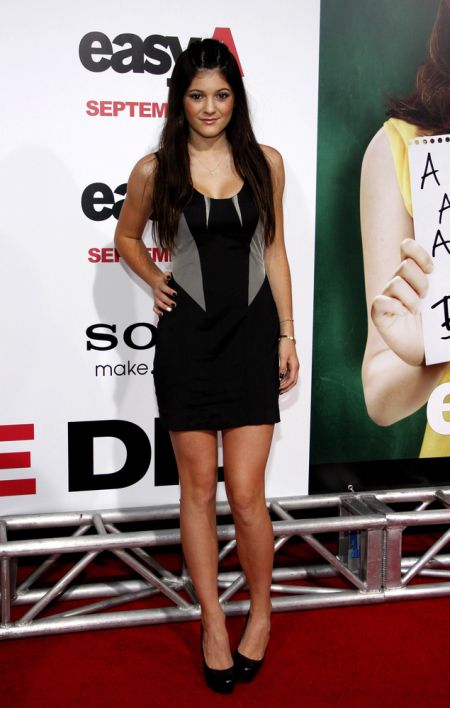 The young reality TV star looked demure at the 2011 Teen Choice Awards. She wore this champagne-colored BCBGeneration dress with a Raven Kauffman Couture clutch and Prada heels. The dress was a great choice. It looks beautiful on her. Also, we love the wavy hair – it looks so pretty.

Still just a young teenager, Kylie Jenner was pretty in-demand at this point. She had the family’s reality TV that she was on, a budding modeling career and she was going to big Hollywood events. She was still only 13 at the 2011 Teen Choice Awards. Shortly after this event, she went to the Style Awards where she and her sister Kendall picked up the award for Stylish Sisters. When Celebuzz talked to them backstage, Kylie described her personal sense of style at the time as “simple.” “I would say simple. Simple colors, and more texture. I want to be different, but it’s really whatever I’m in the mood for that day!” she said. 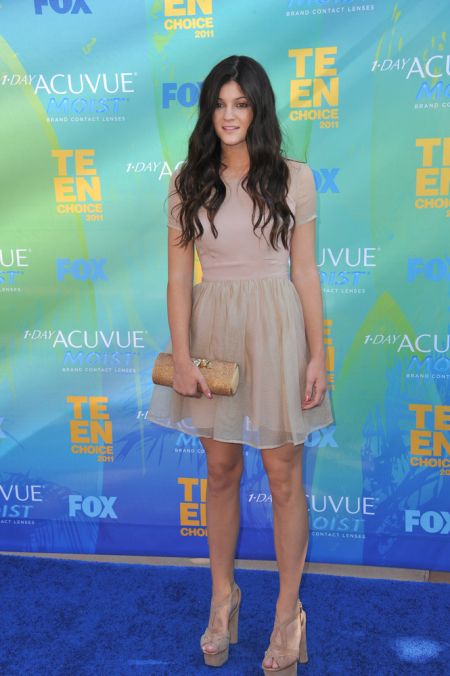 Kylie Jenner attended the premiere of “The Hunger Games” in this short white Camilla & Marc dress, which she paired with a pair of sparkly Louboutins. We think the dress is a little too mature for a 14-year-old girl, but we’re getting used to the fact that Kylie isn’t your average teenager – she’s a reality TV star with an empire to build.

At this point, Kylie and Kendall had stopped attending high school. It wasn’t like they were dropping out though – they were going to be homeschooled. This gave them both the time to model, write a book and design their own collection for PacSun called The Kendall and Kylie collection. According to Kylie, they didn’t get any help with it from their older sisters for designing their collection. “We actually didn’t want advice from our sisters,” she told omg! “We wanted it [to be] more about me and Kendall, and organic thoughts.” 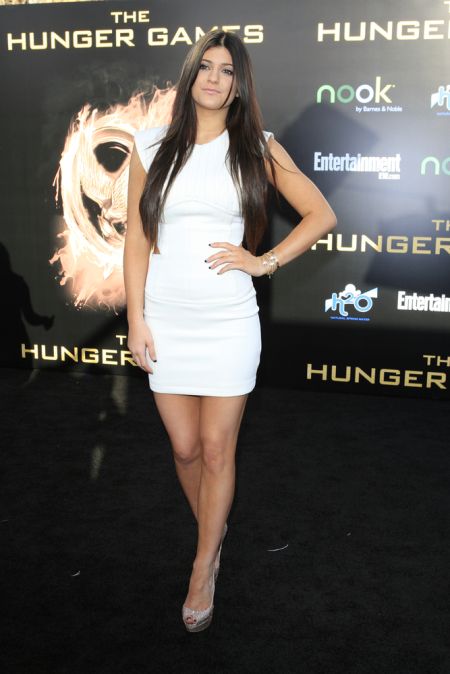 The budding model showed up at the premiere of “Ender’s Game” dressed more like a teenager. She wore a black printed T-shirt with a mauve skirt and black gladiator heels. We think she looked pretty good. Like her sister Kendall, she has obviously been blessed genetically.

At the premiere of “Ender’s Game,” she met up with Jaden Smith, her rumored boyfriend at the time. They walked the red carpet together and posed for photos with their arms wrapped around each other. According to a source, these two were definitely dating. It became clear that Kylie had feelings for Jaden when her birthday note for him became public. “Although we can’t remember exactly when we met, I couldn’t be more grateful that we did,” she wrote. “You understand me like not many do and you always know the right time to make me laugh. And no, you haven’t failed once to catch me when I attempt to walk or open the door on my every entrance. Happy birthday to my best friend.” 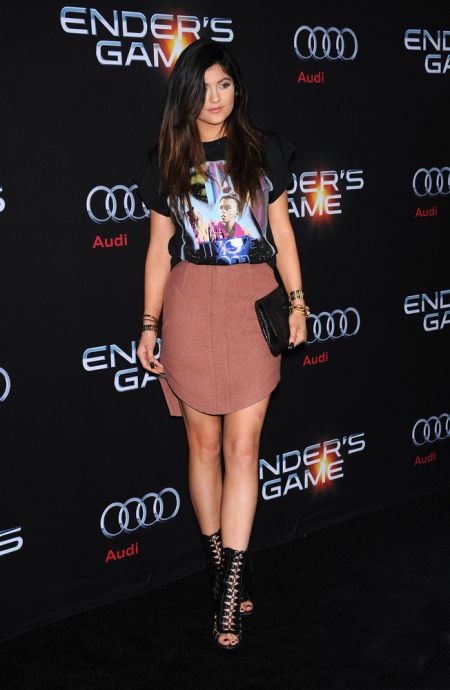 Kylie Jenner looked all grown up at the premiere of “The Hunger Games: Catching Fire.” She donned a charcoal-colored Spring 2013 Kimberly Ovitz Chalu dress, which she paired with a Bottega Veneta clutch and Christian Louboutin Mado leather lace-up ankle boots. Even though she’s dressed like someone who is in her 20s, Kylie is still just 16-years-old. She’s still technically in high school, even though she really only does a few hours of homeschooling a day. 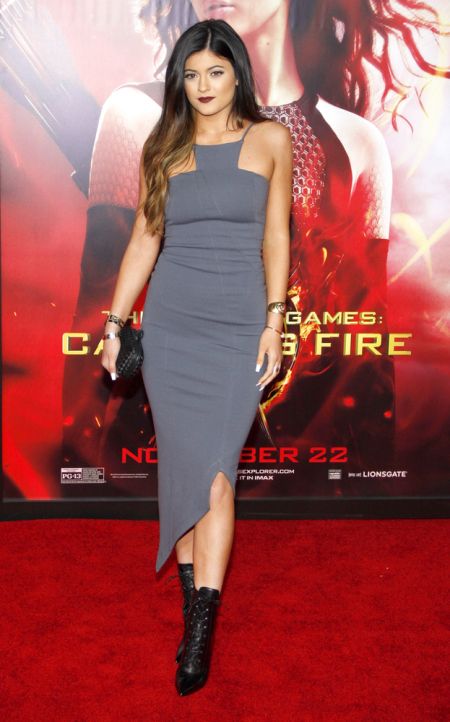 The youngest daughter of Kris Jenner rocked a black crop top with a gold and black printed Sass & Bide Fall 2014 skirt with asymmetrical lines with a pair of Malone Souliers ‘Savannah’ sandals at the 2014 Teen Choice Awards. She may still just be a teenager, but she’s looking a lot older in this picture. Her lips are also a lot fuller than they were the year before. It looks like she was just started to experiment with lip injections.

The whole Kardashian klan was still lying about what Kylie was really doing with her lips at this point. Kim told U.K. beauty blog Pixiwoo that Kylie’s lips looked that way because of makeup. “She draws her lip, and it looks amazing,” Kim said. “And I go into her room like ‘What liner do you wear?’ because she only wears a lip liner and she fills it in she doesn’t wear a lipstick or a lip gloss. But she’s so good at makeup, every event she does it herself.” 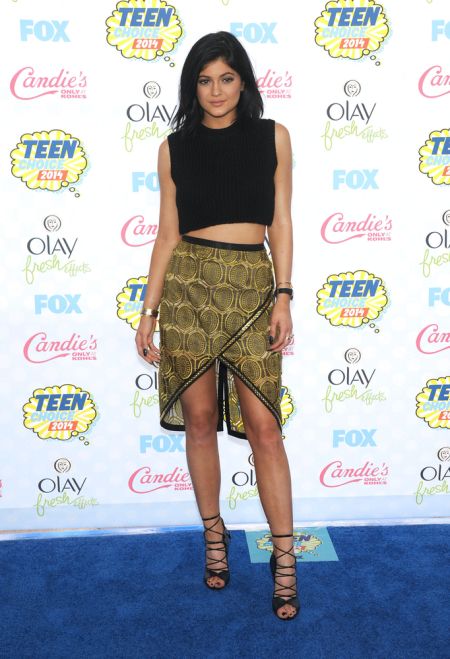 Kylie Jenner really vamped it up at the 2014 American Music Awards. She wore this silk Alexandre Vauthier gown, which featured a plunging neckline and a thigh-high slit. She accessorized with a pair of black Tamara Mellon pumps and a fringed Alexander McQueen shoulder bag.

Kylie’s lips were looking fuller than they were at the Teen Choice Awards; however, she was getting tired of people commenting on them. She tweeted a number of messages, which raised some good points: “how long are we gonna talk about this lip thing lmao;” “Let’s get a our lives together guys and talk about some important sh*t;” and “Just talk about something new at least. I’m bored.” She’s right. Why do we care so much? Probably because she lives her life in the spotlight and she’s still just a teenager – far too young to start experimenting with plastic surgery. The most interesting thing about her tweets is that she doesn’t deny having anything done to her lips. 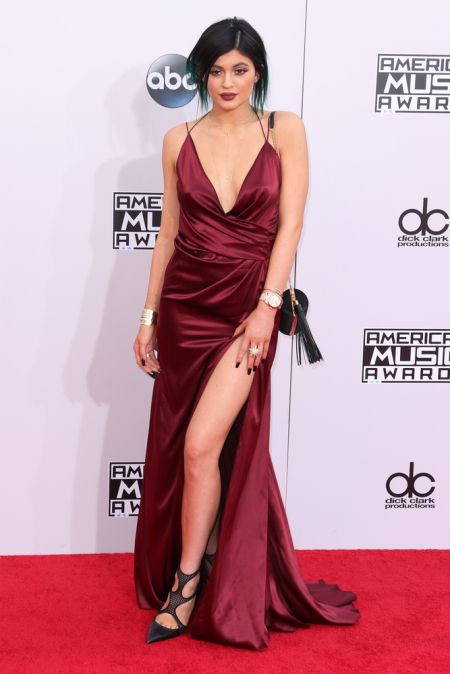 The reality TV star was dressed pretty provocatively at the Nip & Fab Launch. She wore a see through black top, with a black push-up bra underneath, and a pair of high-waisted black pants. She completed the look by draping a black coat over her shoulders. It is a bit shocking to see her fashion evolution. She dressed more appropriately when she was just 13-years-old. At 17, she dresses pretty trashy.

Kylie Jenner finally admitted on the family’s reality TV show that she had decided to get lip injections. “I have temporary lip fillers, it’s just an insecurity of mine and it’s what I wanted to do. I’m just not ready to talk to reporters about my lips yet because everyone always picks us apart. I want to admit to the lips, but people are so quick to judge me on everything, so I might have tiptoed around the truth, but I didn’t lie,” she said. It’s a shame. Kylie is naturally quite pretty. We wish she could see it. 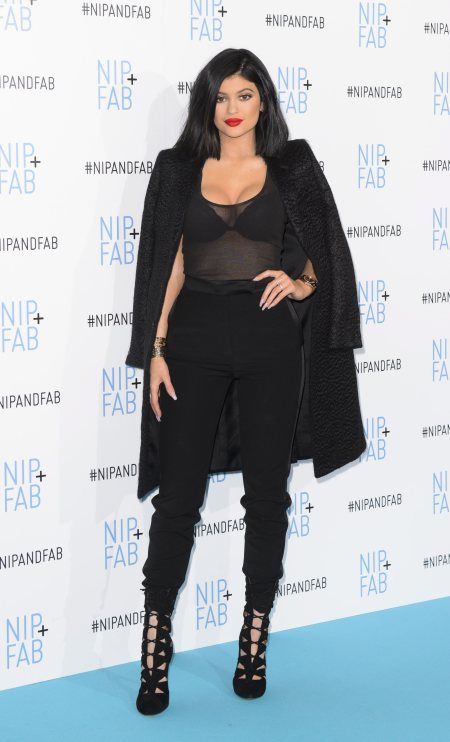