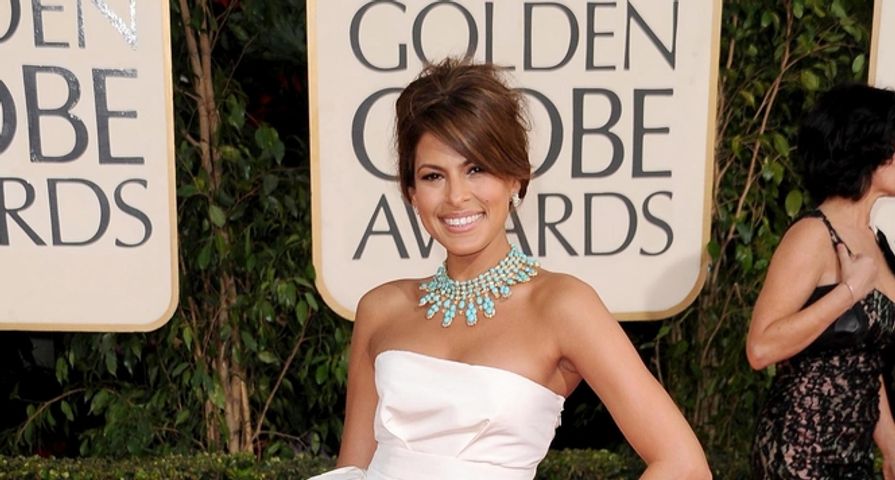 Eva Mendes has been in Hollywood for well over a decade. Although she’s never been known for being an exceptional actress, she has developed a reputation for being incredibly fashionable on the red carpet. With her grace, beauty and enviable figure, she has proven time and time again that some of her greatest talent lies in her innate understanding of fashion and, of course, her confidence in front of cameras. Few other female celebrities have nailed it so consistently on the red carpet. Because we love Eva’s fashion so much, we decided to go through her fashion evolution – check it out!

Eva may not have had a lot of experience on the red carpet when she attended the premiere for her film “2 Fast 2 Furious,” but she could have fooled us. She looked classy and sophisticated in this conservative but fashionable cream dress. We know that Mendes will become increasingly more fashionable as the years pass, but we think this is a really great starting point for her red carpet success. It’s too bad the film wasn’t better received among critics!

Costume Institute Party of the Year – 2004

The “Hitch” star seemed to get it all wrong at the Costume Institute Party of the Year back in 2004. Although the dress hangs beautifully on her figure, the blue satin part on the dress makes it look tacky. If the dress had been a solid color – preferably the peach – it would have looked much better.  Eva finished the look with a grungy fur wrap and a gaudy clutch. Complete fail.

Eva Mendes was back on track when she wore this olive colored wrap dress to “The Dukes of Hazzard” premiere in 2005. Overall, the outfit is pretty great. The only thing that we would consider changing is the purse. Something a bit smaller would have looked better (she is on a red carpet, after all). 2005 turned out to be a pretty busy year for the rising star. She had starring roles in a few different moves around this time, including “Hitch,” “The Wendell Baker Story” and “Guilty Hearts.”

The “Beyond the Pines” star looked like a sexy pin-up at the 2006 Spike TV Scream Awards in this red high waisted pencil skirt with a black cotton tee and black peep toe heels. The whole look is a bit retro, but she pulls it off. Mendes is quickly establishing herself as one of the more fashionable stars on the red carpet. She knows what looks good on her body and she isn’t afraid to take calculated risks. Even if her career doesn’t take off, Mendes always has her fashion to fall back on!

Eva Mendes wore this leopard-print Anna Molinari dress with white Louboutin heels to the photocall for her film “We Own the Night.” The dress wasn’t especially flattering, but she was able to show some skin thanks to the off-the-shoulder design. This wasn’t Eva’s best look but it wasn’t her worst either. This outfit is average at best.

The “We Own the Night” star looked regal in this bold blue, strapless Yves Saint Laurent dress that she wore to Metropolitan Opera opening night of “La Fill Du Regiment.” This was reportedly her first time at the Metropolitan Opera Gala. In 2008, Mendes starred in a remake of George Cukor’s 1939 film “The Women.” Critics weren’t especially impressed with the film or her performance. Mendes and her co-stars each received a Razzie nomination for Worst Actress.

Eva Mendes made numerous best dressed lists when she showed up at the 66th Annual Golden Globe Awards in this white, strapless Christian Dior Couture gown with a turquoise Van Cleef & Arpels collar necklace. Her stylist Rachel Zoe definitely deserves some credit for this one. She styled Mendes, Debra Messing, Anne Hathaway, Cameron Diaz and Demi Moore for the event and we think they all looked fabulous.

“The Women” star rocked this one-shouldered, silver and blue animal-print Stella McCartney dress at the 2010 MTV Movie Awards. She accessorized with House of Lavande jewelry and a bag and shoes by Roger Vivier. Mendes hadn’t received a lot of praise for her acting chops at this point; however, she was establishing herself a force to be reckoned with on the red carpet. She clearly has impeccable style and she is no stranger to best dressed lists.

Eva Mendes further established herself as a style star when she arrived at Variety’s 2nd Annual Power of Women Luncheon wearing this striped Salvatore Ferragamo Resort 2011 halter dress with a white clutch, a white Ferragamo belt and a nude pair of Sergio Rossi pumps. Personally, we would have preferred a different color of heels; however, the rest of the outfit looks unbelievably beautiful on Mendes and it is one of our favorite looks so far.

The “Training Day” star proved once again that she is easily one of the most fashionable stars in Hollywood when she attended the 2011 Critics Choice Movie Awards. She wore this black organza lace Valentino Fall 2009 Couture dress with Brian Atwood ‘Wagner’ nude pumps and dazzling earrings to the 16th Annual Critics Choice Movie Awards. We aren’t the biggest fans of the oversized black bow on her right shoulder or the nude pumps. However, neither of these things takes away from how exquisite Mendes looks.

Eva looked stunning in this black lace Dolce & Gabbana dress with a Sergio Rossi clutch, David Webb Jade jewelry and black satin Brian Atwood ‘Nicol’ pumps at the “Holy Motors” premiere. The dress was classy, but sexy with a sweetheart neckline and a knee-length hemline. Unlike many of Mendes’ other films, “Holy Motors” received mainly positive reviews. Critics considered it to be one of the year’s most exhilarating cinematic rides.

The Place Beyond The Pines Premiere – 2013

The “Stuck on You” star wore this belted coral Prada gown with a lovely butterfly encrusted belt and blush colored Prada shoes accented with Lorraine Schwartz jewels to “The Place Beyond the Pines” premiere. Mendes ended up hooking up with her current beau Ryan Gosling during filming. According to the Oscar-nominated actor, when the director was casting for the part of Romina, he suggested Mendes for the part…and the rest is history.

Eva Mendes appears to be taking a break from acting and is instead working on her clothing line for the Eva Mendes Collection. She hosted the New York & Company launch of the Eva Mendes for NY&C Spring 2014 collection with a pop-up shop at The Beverly Center this past March. She wore a pretty navy and white dress from the new Eva Mendes for NY&C collection with a navy Smythson clutch, Bionda Castana ‘Daphne Bis’ gold floral lace pumps and a selection of gold bracelets.