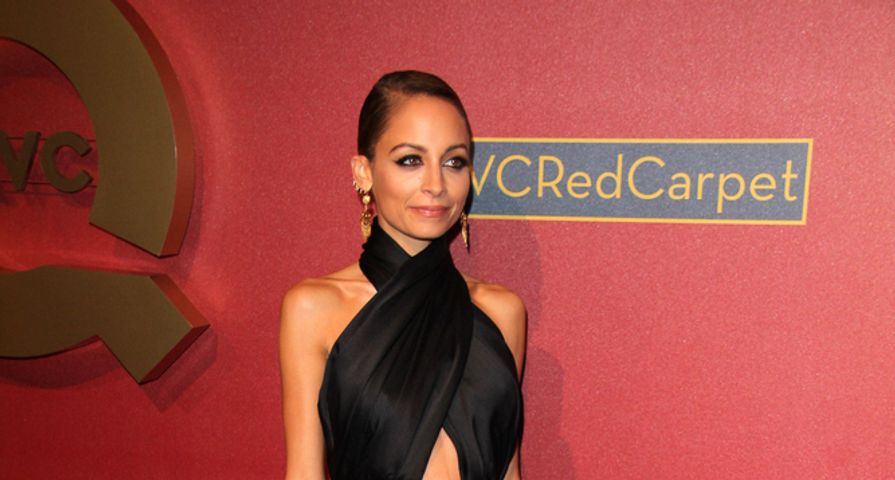 Nicole Richie is one of the more fashionable women of her generation. She went from being one of Rachel Zoe’s little dolls to a fashionista in her own right. She doesn’t always get it right on the red carpet, but she has already demonstrated, time and time again, that she has a really unique sense of style that deserves our utmost respect. We have been carefully watching her since her days on “The Simple Life” and it has been interesting to say the least. Since Richie is such a force to be reckoned with on the red carpet, let’s take a look at her fashion evolution!

Nicole Richie looked like a very different woman at the 2003 Billboard Music Awards. She wore a white top and a short white mini-skirt with blue pumps and a gold clutch. The top appears to be partially see-through, which isn’t especially classy. Also, her extensions look really cheap.

Fashion obviously wasn’t as easy for Richie as stardom. It really didn’t take much to make her famous. “The Simple Life” was meant to be a vehicle for Paris Hilton; however, she never had nearly as much personality as Richie, who was outspoken and quite funny. If the show had featured Paris with her younger sister Nicky, as it originally intended to, it would have been canceled pretty quickly. Richie was the real star of “The Simple Life.” She is just needed a makeover to help her look the part of the young star because, at this point, she wasn’t looking her best.

“The Simple Life” star showed up to hear Fox announce the 2004-2005 season primetime schedule looking better than she did at the 2003 Billboard Music Awards. She wore this grey-colored dress over a pair of white slacks with white shoes. We aren’t huge fans of the outfit – she could do better. We are, however, really into the new hairstyle. It is a vast improvement over the hair extensions.

Nicole Richie’s style was really starting to change at this point. For her first couple years of fame, she dressed similarly to her good friend Paris Hilton. On “The Simple Life,” they almost always coordinated their outfits and, on the red carpet, they would do the same thing. Richie was starting to exert her own sense of style at this point, which meant ditching the hair extensions, losing some weight and opting for more sophisticated dresses. This is probably around the same time that Hilton started viewing her friend as a competitor as opposed to a friend.

Nicole Richie looked like a whole new woman at the 57th Annual Emmy Awards TV Guide and Inside TV After Party. She rocked this white and gold dress with gold earrings, gold strappy heels and a gold clutch. At this point, the reality TV star was a bona fide fashionista thanks to Rachel Zoe. “Nicole is now what people refer to as the big thing that happened,” Zoe told The New York Times in 2007. “Everything went from nowhere to everywhere. Nicole was about creating a look. Because of her fashion sense, which was really my fashion sense, she became famous. It was a huge moment: Nicole became a style icon without being a star.”

In 2005, Richie was also a bona fide star as well. “The Simple Life” was incredibly popular and, even though she and Hilton had fallen out, people were still obsessed with her. Everyone wanted to know what she was wearing and who she was hanging out with. Now that is star power!

The reality TV star wore a really cute green dress to the Teen Vogue Young Hollywood Issue Party. It was short, patterned with long sleeves. She accessorized with a pair of cognac, open-toed pumps and a big black clutch. Something tells us that Rachel Zoe was the genius behind this look! She was all about the bohemian look and it just happened to really suit her clients, like Richie, Lindsay Lohan and Mischa Barton.

At the Teen Vogue Young Hollywood Party, Richie was reportedly with her boyfriend at the time, Brody Jenner. Paris Hilton showed up with her sister Nicky and her on-again, off again boyfriend Stavros Niarchos. Richie and Hilton were able to avoid each other on the red carpet by arriving at different times. Hilton showed up much later than her former friend. We think that it is probably safe to assume that Richie was the better dressed of the two.

As of 2007, it didn’t look as though Nicole Richie needed any help staying stylish. She donned this white strapless mini-dress with red pumps to the 14th Annual Race to Erase MS Gala. We love the dress, the shoes and the hair. Overall, a great look for young starlet. We hope that she can keep it up!

Richie had already started dating Joel Madden at this point and it was already pretty serious. They were about to move in together. Brody Jenner, her former boyfriend who she had dated for six weeks during the previous summer, didn’t seem to take Richie moving on that well. In an interview with Details magazine, he and Spencer Pratt made it seem like he only dated her as part of a bet – to see if he could get her to eat. Jenner publicly apologized, but we don’t believe him. “I genuinely love Nicole… I would never say or do anything hurtful to those I love and respect. I’m sorry it was represented that way,” he told People magazine.

At the Carousel of Hope Ball, the former reality star went glam. She wore this gold jewel-embroidered Reem Acra gown and accessorized with a gold clutch. She had just given birth in March of that year to her daughter Harlow and she was still quite curvy. We think she looked super hot. We never knew that she could rock a dress like that!

Richie and Paris Hilton were still pretty close at this point. Richie was all loved up with Joel Madden, but her former best friend was still single. She decided to fix that by setting Hilton up with Joel’s twin brother, Benji. He had just broken up with Sophie Monk and was looking to move on. Although the heiress seemed pretty into the guitarist for several months, the relationship didn’t last and they were over by the end of 2008. After this, Richie and Hilton began to drift apart again.

Nicole Richie wore this brown patterned maxi dress to the March of Dimes’ 4th Annual Celebration of Babies. This isn’t our favorite look on her. Her hair doesn’t look like it has been styled and the dress is nothing to write home about. She actually looks quite ubiquitous in this getup, which makes us think that maybe she does need some help in the style department.

Richie and Joel Madden’s family was still growing in 2009. She gave birth to their second child Sparrow in September of that year. In an interview around that time, Richie said that she wasn’t interested in changing the relationship that she had with Madden. They were unmarried and that was fine with her. Years later, Madden admitted on the Today FM Australian radio show Fifi & Jules he had to ask Richie about 10 times to marry him before she finally said yes in 2010.

The budding fashion designer looked ravishing at the Montblanc Charity Cocktail party in this electric blue Zac Posen Spring 2008 gown, which featured a ruffled hem. She looks so beautiful that we find ourselves speechless. The dark hair looks great and the color and fit of this dress are perfect on her. Moments like these convince us that she doesn’t need anyone’s help when it comes to fashion.

In 2010, Nicole Richie was really living her dream. She married Joel Madden and really began launching her fashion design career. In 2008, she debuted her jewelry line, House of Harlow 1960, and in 2010 the line expanded to include clothes and shoes. In 2009, she teamed up with A Pea in the Pod to create a new maternity collection. As of 2010, she expanded her fashion empire with a women’s line called Winter Kate, which was inspired by her personal style, and in 2012 she launched a collection for Macy’s Impulse line.

Nicole Richie attended the MOCA Gala in this mauve Julien Macdonald Fall 2011 gown, which featured a high neck, leaf embroidery and a semi-sheer skirt. She accessorized with a House of Harlow ‘Olivia’ clutch and silver Chopard jewels. This isn’t one of our favorite looks on her. While the gown has nice details, it doesn’t really highlight her figure. She has a really small waist but, in this dress, it is impossible to see it.

Richie was looking pretty busty in 2011. According to US Weekly, she got implants during the summer of that year. She had reportedly been talking about getting a lift after having children, but no one actually thought she was serious. Sources say that she wanted to improve her bust line for her husband, Joel Madden. Breastfeeding kind of killed whatever she had. We were personally really surprised by this. Richie never struck as someone who is at all self-conscious.

The reality TV star turned fashion designer looked absolutely stunning at the ALMA Awards. She rocked this black Mathieu Mirano Fall 2012 gown, which featured a silk skirt with a sheer bodice decorated with black-and-gold leather paillettes. She opted for some smoky eyes, which made her look even more dramatic.

In 2012, Nicole Richie spent a lot of time apart from her husband, Joel Madden. He was in Australia filming “The Voice” and she was back in Los Angeles with their two kids. There were rumors circulating that all was not well with them. Richie was reportedly upset that he was never around to take care of the kids, which made her feel more like a single parent. There were some sources that were saying that Madden was acting like a single man down under. Nothing ever came of these rumors though and the couple made it through the alleged rough patch.

Nicole Richie attended Clive Davis’ Pre-Grammy Party in style. She donned this black crocodile leather Tom Ford Fall 2012 dress with black Christian Louboutin pumps and a House of Harlow clutch. We love this dress, especially on her. It is edgy and daring. When she gets it right, she really shines.

Richie had really settled down at this point in her life. She was no longer a fixture on the Los Angeles party circuit and she actually sounded quite relatable in interviews, like she has a really good head on her shoulders. In an interview with Flare from 2012, she talked about her life post-children and it sounds surprisingly Zen. “I wake up at 5:30 in the morning, every morning, so I can be alone. I don’t have anywhere to be, but mentally, I like to go downstairs and drink my coffee … I’m telling you, it changes my entire day,” she said. We’re sure her old friend Paris Hilton is just getting in at 5:30 a.m.!

The “Candidly Nicole” star looked gorgeous at QVC’s 5th Annual Red Carpet Style Event. She wore a Camilla and Marc satin black halter gown, which featured a high neckline and cutouts. She completed the look with some gold earrings, a slicked back hairstyle and some cat eye makeup. Who knew the girl with the colored hair extensions would become this fashionable young mother with a design career!

Nicole Richie does have her less fashionable moments, but they seem pretty rare. She is one of the few celebrities that can be depended on to light up the red carpet at any event. She takes more risks than almost anyone else and she clearly has her own unique sense of style, which she stays true to. It also helps that she has such a good head on her shoulders, unlike some of her former friends, like Paris Hilton and Lindsay Lohan.