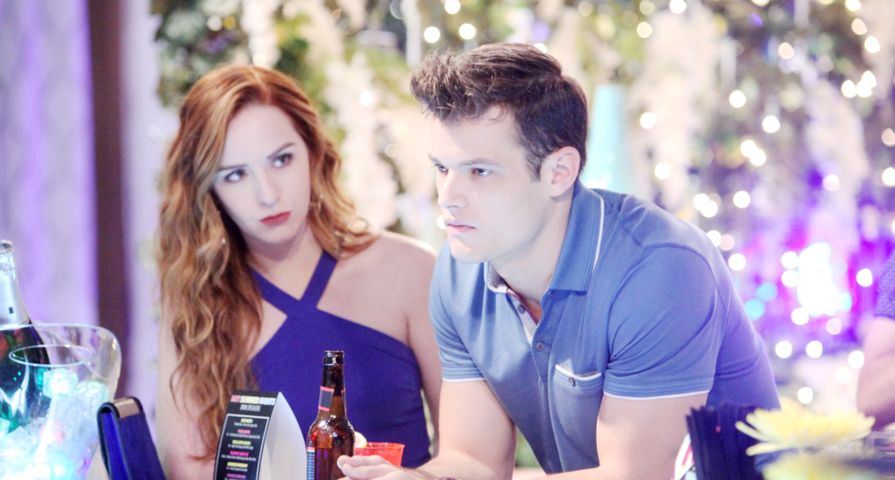 The heat has been turned up a few notches in Genoa City as the Young and the Restless (Y&R) heads into the summer months. While summer spoilers have been released, giving fans a tease around what to expect the next couple of months, it’s only natural for audiences to speculate about what is to come. Below is the Y&R’s summer 2018 forecast of 12 crazy plotline predictions.

Mishael Morgan, the actress who plays Hilary Curtis on the popular soap, recently revealed she is leaving the show. It doesn’t take a rocket scientist to figure out that the character will either be recast or leave storylines indefinitely in the next coming weeks. Regardless of either scenario, Hilary will have to leave Genoa City even if it is for a brief time while producers find an appropriate replacement. But, will Hilary be recast or will she leave the show in a dramatic way? This is Hilary we are talking about, so she’s bound to exit in a big way.

Hilary is currently pregnant with Devon’s baby and the couple’s reunion and attempt at making things work for their little family’s sake has been utterly endearing for fans of Hevon. With the status of Hilary’s character up in the air right now, it wouldn’t surprise any Y&R viewer if Curtis lost the baby during her first trimester – it does happen all the time. It would be devastating for the characters involved and fans alike, but it would make sense.

With Jack’s paternity up in the air, arrows seem to be pointing to the idea that Phillip Robert Chancellor II just might be his real father. The Abbott family has been completely rocked by their mother’s Alzheimer’s and all the cryptic secrets she’s revealed as of late. With Jack out of a leadership role at Jabot, a biological link to Chancellor Industries may mean he’ll go after what is rightfully his. He’s lost a lot as of late, and being appointed CEO of Chancellor or taking on a huge responsibility within that company may compensate for the fact that he’s no longer an Abbott.

Poor Billy is trying with all his might to resist Summer’s advances; however, Y&R viewers know that with Philly living in the same condo as Summer is trouble, and this love triangle is a ticking time bomb just waiting to explode. Summer and Billy are sure to have a romp at some point, leaving mom Phyllis devasted, and getting a bit of a taste of her own medicine.

Phyllis is sure to kick Billy to the curb once she finds out he’s been with her own daughter. While Summer and Billy seem to be walking toward that direction of a one-night stand or an on-going affair, they aren’t meant to be together; however, he and Vicky are. A Philly breakup might certainly mean a Villy reunion by summer’s end.

Phyllis and Jack have long made amends since their nasty breakup (due to her cheating on him with his brother Billy). In fact, they’ve once again formed a nice friendship and have been able to work together on Jabot projects in past months. Once Phyllis is cheated on (the way she’s done to others in the past), she will truly realize the hurt and pain she caused Jack, and it wouldn’t shock any Y&R fan if Jack accepted Red back into his life romantically. He’s going through a lot right now and could use some additional support.

Vicky may need the support of Billy once the proverbial crap hits the fan around J.T.’s murder. While she, Phyllis, Sharon, and Nikki have worked hard to cover it all up, it’s clear that will eventually blow up in all their faces. What if J.T. somehow survived the entire debacle or the man parading around as J.T. (that was killed) was not really him (insert evil twin storyline here)? He really wasn’t acting like the J.T. fans remember back in the day. J.T. being alive would be a hard storyline to pull off; however, in the land of soap operas, anything is impossible.

5. The Fate Of Shick

Despite Victor’s attempts to take Christian away from Nick, and using his relationship with Sharon in this custody battle, Nick seems adamant about standing by his woman’s side. The two are doing well, but how will Nick feel when he learns he’s been lied to (once again) by the one that he loves? The truth about what Nikki, Phyllis, Vicky, and Sharon did to J.T. is sure to come out, and the aftermath will rock the Shick relationship. Here’s hoping they can survive it all.

There’s clearly someone out there looking to sabotage Newman, and summer spoilers indicate that Victor will fight to keep control over his company’s legacy. Spoilers also indicate that The Moustache is hiding a huge secret that could ruin everything he’s got going on in his life right now. But, what could that secret be? And who is the voice behind the distorted audio file that was sent to Victoria? Would anyone be surprised if it was Adam Newman? Or that Victor’s been hiding the fact that he’s been alive all this time? It’s not too far-fetched if Adam survived the cabin fire and that his dad has been helping him this entire time.

The battle looms on between Victor and Nick in regards to who should raise Christian. While Victor seems to have the upper hand right now and Nick is struggling, if Adam returned, all bets would be off over Christian’s custody battle. Maybe that is the very reason why Adam will resurface? Perhaps he was fine with the idea of Christian being raised by Nick, but thought of Victor raising him was too much, and he wanted more for his youngest son.

Despite the fact that Nikki and Arturo have long since ended their little affair, she will definitely continue to be a thorn in Abby and Arturo’s side. Nikki is clearly jealous of any woman who is anywhere near her once-lover and as she is someone who is used to getting what she wants, she’ll continue to look for ways to stop the Abby/Arturo romance. Nikki will also most likely be in Victor’s ear about the entire relationship to try and stop the two from getting closer.

It’s been a long time coming. Mariah has had a slew of failed relationships in Genoa City and always seems to play second fiddle when it comes to romance. With Kyle Abbott entering the scene, it seems like Mariah might finally get a good chance at a love story that has a ton of chemistry. Kyle seems like the playboy type, which will undoubtedly be tamed by a level-headed Mariah. These two are sure to hook up by summer’s end.