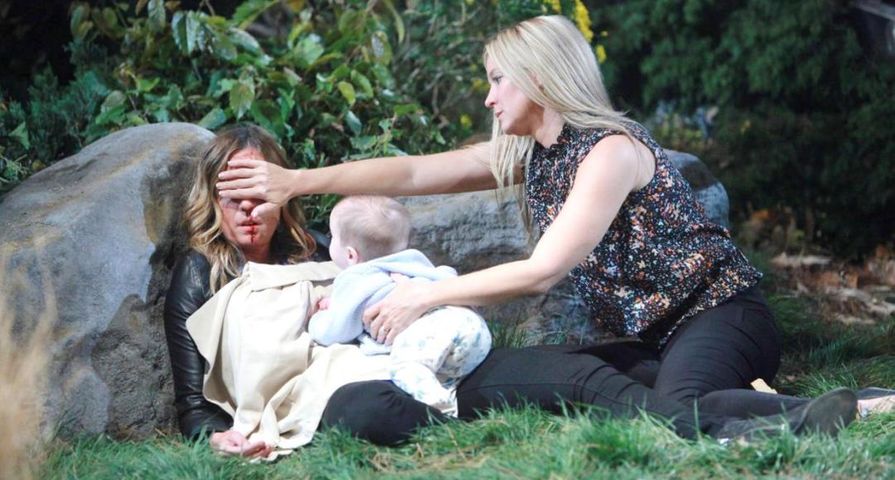 What would The Young and the Restless (Y&R) be without a little scandal? Genoa City is a place that is known for controversy and plenty of that happened this past year. Whether it was affairs, jail sentences, deaths, or even questionable paternity, the Y&R had some pretty big scandals over the past 12 months. Below is an overview of the top ten Y&R scandals that rocked the little town in 2016.

This scandal hit in and around the time the clock struck 12 a.m. on January 1st, and Y&R ushered in 2016. Billy was hit by a car in a parking lot leaving him struggling for his life. While friends and family were distraught, wondering if he was going to make it through to see another year, there were others that were quite suspicious about who hit him and left him to die. In the end, it was revealed that clean-cut Noah Newman was the culprit and it turned out to be a simple accident. As Noah was leaving the Stabby New Year’s Eve Wedding, he tried to get out of the parking garage, but was blocked by a car. He accidentally hit Billy, who had been left behind a vehicle after he was attacked by his bookie. Noah kept the secret hidden, despite it being an innocent mistake, which caused an entire scandal to ensue once the truth came out.

It’s bad enough that Hilary was involved in a father-son love triangle the year before, but once 2016 hit, she engaged in another scandal. While she had chosen Devon over Neil last year, her scandal of 2016 was wanting her ex-husband back and going through extreme lengthens to seduce him. Hilary has always been a little crazy, but her pursuit of Neil earlier on in the year and the fact that she was trying to push Devon away took the cake. Memory loss had a bit to do with it, but still! Nowadays, she’s looking to uncover scandals of the elite in Genoa City, and she is sure to engage in some more controversy come 2017.

This is fresh in everyone’s mind because it happened quite recently. People cheat on their boyfriends and girlfriends all the time in the land of soap operas, but so early in a relationship? Travis cheating on Victoria with his ex-lover Michelle was shocking to say the least and very unexpected. Even more scandalous? The fact that ex-husband Billy was the one who had to be the bearer of bad news. The only silver lining is for fans of Billy and Victoria. It’s almost a certainty that these two on-and-off-again lovebirds will reunite come the new year.

It’s not very often that a child is portrayed as a villain on a soap opera. More often than not, children are sweet and cute. That was certainly not the case when Max Rayburn rolled into town. He appeared to be a child who had some issues, but this was understandable considering the fact he spent limited time with his dad in the past, only to be tossed into an instant family with step-mom Abby when his mother passed away. The hints that Max could want to do harm to anyone was creepy to say the least, but organizing a tripwire during Abby’s baby shower that resulted in her losing her and Stitch’s child was awful. It turned out that Max had a tumor that was causing him to act out aggressively, so there was certainly an explanation around his behavior. Unfortunately, even after Max had it removed, the aftermath of everything Abby and Stitch had to deal with was too much for their marriage to survive.

Dr. Anderson was the master mind behind the Baby Christian/Baby Sully storyline, working hard in 2015 to make sure that Nick and Sage believed their child was dead – then handing the baby over to Sharon and Dylan. In February, Patty went on a rampage and killed the not-so-good doctor (shocking and scandalous), leaving a door open for Sharon and Nick to find out who Anderson really was. Turns out the doctor was actually Sandra Allen, a high school friend of his that he had a fling with, the same Sandy Allen who had suffered from paralysis after Nick dared her to jump off the roof of his home into the Newman pool. The accident shattered her Olympic diving hopes, and Victor quickly paid off her parents to keep the whole scandal under wraps. Allen, in her pursuit of revenge, concocted a plan to return to Genoa City and ruin Nick … which she was almost successful in doing.

5. Victor Is Hauled Off To Jail

Does the Moustache ever lose? Well this year he certainly did take a stumble when he was hauled off to jail. The entire court case seemed so up and down, with the Newman family, as well as Phyllis who was rooting for Victor’s downfall when it came to his involvement around bringing Marco Annicelli to Genoa City. The judge’s decision to imprison Victor was scandalous to say the least, not to mention the reason he was sent to jail. It seemed like Victor was on the cusp of cleaning his hands around the entire situation, especially when it was revealed that his attorney Michael Baldwin was working to sabotage him. Alas, Victor did go to jail, only to be released shortly after. Victor may be down, but he is never entirely out.

Speaking of Victor’s imprisonment, one key thing on his mind while in jail this year was revenge. While it may be hard to believe, a man with Victor’s power and stature can still manipulate events in the little town, even from a jail cell! Enter: Chloe Mitchell. This scandal has yet to be revealed to the Geno City public, but was a huge storyline in 2016 for Y&R audiences. Chloe was not only Victor’s accomplice to help pin Adam Newman for the murder of Constance Bingham, a crime he did not commit, she was also the reason behind Adam’s death this year. Shooting him with a Taser gun, watching him suffer, and then running while the cabin he was in exploded, Chloe may have some explaining to do in 2017 once BFF Chelsea figures out what her friend had been up to the past year.

They bonded over gaining revenge on Victor Newman, but what started out as an innocent friendship between a brother and sister-in-law turned into a heated affair. At one point, these two had zero issues with hooking up and simply couldn’t keep their hands off each other. Billy almost became obsessed with Phyllis and Red was quite smitten with the youngest Abbott son. What was worse than the affair itself was the aftermath – that continues – once Jack, husband and brother to these cheaters, found out. Jack is still a shadow of his former self and Genoa City was rocked to its core once the news leaked out that an Abbott wife would cheat on her husband with his brother. #ClassicSoapOperaLoveTriangle.

Probably one of the more heartbreaking and unexpected stories in 2016 was the sudden death of Sage Newman this past spring. Finally figuring out that Baby Sully was in fact Christian, Sage was on a mission to not only let Nick know about this incredible news, but the baby’s real father, Adam. Alas, she gets into a car accident beforehand, with Sharon not too far behind her. Sage dies holding her baby one last time and has Sharon swear that she will tell Nick the truth. But, Sharon does not …

This storyline dominated some of 2015, as well as most of 2016, and will probably continue to trickle down into 2017. Sharon found out in the spring of 2016 that Baby Sully was in fact Christian, but while she swore to a dying Sage she would tell Nick the truth, Sharon ended up keeping the secret to herself. Guilt, fear of the unknown, and Patty promising to reveal the truth drove Sharon insane. Just before American Thanksgiving the scandal was revealed and what has happened since has been a whirlwind. Nick was quick to take Christian away from a heartbroken Dylan and Sharon; Faith’s world has been turned upside down; and a visitation/custody suit has been launched. Nikki is reeling, Victor is angered, and Chelsea has been a cornerstone of support for Nick. All this drama has many fans wondering: if this is the aftermath to the baby’s true identity reveal, what other crap is sure to hit the fan once everyone learns that Christian’s father is Adam … and not Nick.