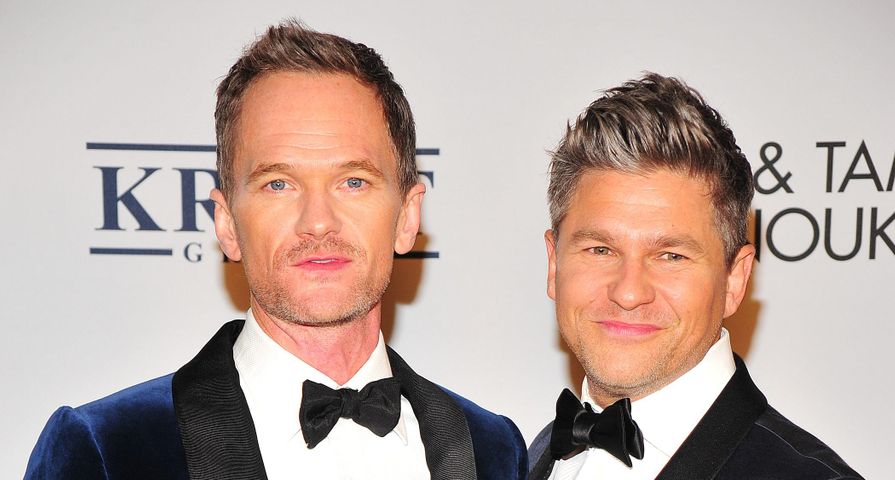 These two are Hollywood’s sweetest couple! Fans are constantly gushing over their adorable family photos and the sweet relationship they’ve shared over the past 10-plus years. Emmy and Tony Award-winning actor, Neil Patrick Harris, who’s best known for his role in the sitcom How I Met Your Mother, married fellow actor turned professional chef back in 2014. Their relationship spans much farther back than that. The two have been together since 2004 and raising their two children since 2010. Just because we love them so much, here’s a look at 10 things you probably didn’t know about their relationship!

Neil Patrick Harris met David Burtka through a mutual friend named Kate, but she didn’t necessarily set the two up. According to Harris, he ran into his friend Kate on the street, and saw that she was with this “brooding, James Dean-type guy in a leather jacket.” He was immediately attracted to him, but assumed he was Kate’s boyfriend. When Kate told Neil that the mystery man wasn’t straight but already had a boyfriend, Harris’ heart sank; however, not all hope was lost! The two men sparked up a new friendship and continued to cross paths, but never really thought they’d end up dating. Burtka eventually broke up with his boyfriend and went on a date with Harris only a week later. “We started hanging out every single night, and after three months, it was just non-stop,” said Burtka to Out in an interview.

Neil Patrick Harris isn’t afraid to admit he was the first one to utter those three little words or the fact that it wasn’t reciprocated! “I initially fell for David harder than he fell for me. I was in love with him before he was comfortable saying it, and I think that speaks to our past experiences. I remember saying, ‘I think I love you,’ and he was like, ‘That’s really nice,’ which is not necessarily what you want to hear. But I appreciated his honesty in not jumping the gun and saying something because he felt obligated to,” said Harris to Out back in 2012.

Harris and Burtka announced their engagement on Twitter in June 2011 after the Marriage Equality Act in New York was passed. It was later revealed they’d actually been engaged for five years but decided to keep it a secret. “David first proposed to me five years ago on the actual street corner where we met (9th Avenue between 44th and 45th Streets in NYC). We were on our way to an event at an Indian casino 45 minutes out of town in a limousine, and David wanted to stop for some reason that I didn’t quite get. I thought he wanted to get some booze or something. And then he got on one knee and proposed…Then I got the ring and loved it, and a year later, on Valentine’s Day, I proposed to him in Santa Monica. That was four years ago,” said Harris.

They finally tied the knot in Italy in September 2014 after being together for nearly 10 years. Their ceremony was extremely small with only 45 people in attendance and was officiated by friend and mentor, HIMYM producer and director Pam Fryman. Later on in the evening, Elton John sang at the reception. During an appearance on The View, Harris said his decision to get married was not to make a statement, but rather for their kids, “I think when our kids got to the age when they were having reasonable conversations where they’re asking lots of ‘why’ questions, then it seemed [important] to be able to have a real clear-cut [identity] of who their daddy is — that he’s my husband, it was easier than partner or boyfriend.”

In an interview with ET, Neil Patrick Harris emphasized how important it is to be able to adapt and be flexible in a relationship, but also maintain strong communication. “You got to ebb and flow. The relationship changes. The definition of it changes. If you are too rigid about what your expectations are and then suddenly it changes, then you have more reason to want to look elsewhere for stuff. In our relationship, communication is super important. Good friends of our said, ‘You need to talk it out,’ and if that means raising your voice, you need to raise your voice. Know what you’re talking about. Know where you’re standing as opposed to letting stuff build up, I guess,” said Harris.

5. The Same, but Different

Not only are David and Neil parents to twins, but they themselves are kind of like twins! In an interview with Out, Neil pointed out how the two are different in their personalities, but when it comes to their physical appearance, they are strikingly similar. “We share a wardrobe. We have the same shoe size, body size, height, and weight. We’re both Gemini.We both like the idea of family – not a nuclear family, but a social family. Yet, we’re incredibly opposite in the way we process information,” he said.

4. They Always Knew They Wanted Kids

In the same interview with Out, Burtka said it would have been a deal breaker if Patrick hadn’t been open to being a dad: “Even on that first date, we talked about kids. If he hadn’t wanted kids, I don’t think we’d be together. I always thought that family was the most important thing in life, and no matter what I do, whether being a chef or an actor or a dancer, being a dad is what I do best. I am the maternal one in the relationship,” said Burtka. Harris confirmed in an interview with Oprah that Burtka is the more maternal one of them and that the first 9-months of being a parent were a much bigger adjustment for him. According to Harris, they made the decision to have children sooner than later around the time How I Met Your Mother was in season two or three.

After a lot of research and finding the perfect egg donor and surrogate, David and Neil welcomed fraternal twins, Harper Grace (named after Harper Lee because To Kill a Mockingbird is one of their favorite books) and Gideon Scott in October 2010. The twins refer to David as “Daddy” and Neil as “Pappa.” In an interview with Oprah, the two opened up about the process they had to go through. “Two eggs, two embryos, one of mine, one of his,” explained David, and luckily two of them took which is how they ended up with twins! They revealed that they knew their surrogate, but had no idea who their egg donor is. They went through a donation bank and were able to thoroughly research her personal and medical history, but the rest is anonymous.

Starting a family was one of the many ways they’ve rejuvenated their relationship over the past 13 years. Harris told Glamour back in 2014 that seeing David become a dad caused him to fall in love with him all over again. “Honeymoon phases end. They just do. I think you have to find new elements that turn you on, and not only sexually. Having kids was one of those great moments for me. Watching David become another level of person, mastering this other domain, made me look at him with a whole other set of appreciative eyes. That made me re-fall in love with him,” he said.

David and Neil are open about the fact that their relationship isn’t perfect. They have ups and downs just like any other couple and even go through those lulls where they need to re-fall in love with one another. “I don’t want to paint our relationship like we met and it’s been happy family fantastic-ness ever since. What defines a relationship is the work that’s involved to maintain it, and it’s constantly changing,” said Harris to Out. In a more recent interview with Life & Style, David revealed that one of the ways they maintain a strong relationship is through couples therapy. “Not that there’s anything wrong, but it’s nice to sort of just talk to someone who is a mediator. That’s helped our relationship,” he said.