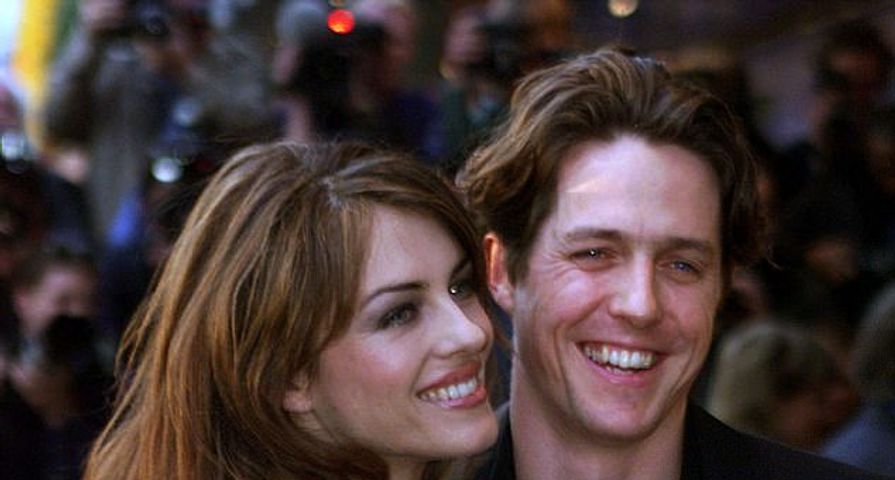 Elizabeth Hurley and Hugh Grant have one of the most unique relationships in Hollywood. They were one of the hottest couples in the ‘90s, but they split up after dating for 13 years. Remarkably, they still remain close friends to this day! Even though it’s been a long time since these two were an item, we’re feeling a little nostalgic today, so check out these 12 things you probably didn’t know about their relationship!

The two actors met on the set of the Rowing With the Wind back in 1987. Hugh Grant starred in the film as Lord Byron and Elizabeth Hurley played his former lover, Claire Clairmont. After hitting it off on set, they went out on a date and continued their relationship for more than a decade before they eventually broke up in 2000.

In 1995 when Hugh Grant was still in a relationship with Elizabeth Hurley, he was caught picking up a sex worker off Sunset Strip in L.A. Grant was arrested for lewd conduct, had his mug shot taken, and name dragged through the mud across all tabloids. You’d think this would be a deal breaker in a relationship, but he and Hurley stayed together! Not surprisingly, their relationship was plagued with rumors of infidelity for the next five years until they eventually called it quits in 2000.

PREMIUM —
Things You Might Not Know About Harry Connick Jr. And Jill Goodacre's Relationship

10. Poking Fun at Grant on Royals

If this doesn’t prove how close these two are, then we’re not sure what would! We all know about Grant’s infamous sex worker scandal from 1995 (as mentioned in the previous slide). It has followed him for the past 20 years ever since it happened. To make light of the whole situation, Hurley poked fun at Grant during an episode of the Royals! During the season 3 premiere, Queen Helena, played by Hurley, is set up with a male prostitute named Huge Grant. She doesn’t end up sleeping with him, but the joke was not lost on viewers!

9. Why They Broke Up

During an interview with Andy Cohen on Watch What Happens Live back in 2015, Hugh Grant revealed why he thinks their relationship ended. “…the sex bit probably fizzled out, but now she’s my absolute best friend — number one person I call in a crisis,” he said. Elizabeth Hurley, on the other hand, remembers it differently. She said it was because Grant was a bit of a grump! “He used to really annoy me, actually. I mean, I love him, but, um, he’s very annoying,” she said.

Continuing off the fact that Hurley thought Grant was a bit of a grump, she also revealed that because he was so grumpy, her friends came up with a nickname for him! “My friends used to call him Grumpelstiltskin. He is very grumpy. But I found it actually fairly charming,” she said. Andy Cohen replied with, “I do too,” to which Hurley replied, “But not 24/7.”

7. They Still Talk Every Day

When Elizabeth Hurley was asked which of her co-stars she’s kept in touch with the longest, her answer was easy — Hugh Grant! The two of them were co-stars in the film Rowing With the Wind which is where they first met. In fact, she said the two of them still talk every day and are each other’s go-to person for business questions. “We met on a movie 29 years ago and he’s still my best friend today, and I still speak with him every day,” she said. “That was the best co-star I’ve ever had for sure.”

There’s no doubt these two have an unusual relationship. Not many exes continue to be friends after a break-up! It’s quite refreshing. But not only are these two friends, they’ve continued to keep each other in their lives by naming each other as godparents of their children! Grant is the godfather of Hurley’s son Damian, who she shares with her ex Steve Bing. While Hurley is a godmother to one of Grant’s daughters.

5. Live Close to One Another

In an interview with chat show host Jonathan Ross, the Royals actress revealed that she and Hugh Grant are able to stay such close friends because they are next door neighbors! “He lives next door to me and he’s the godfather to my son and I’m the godmother to one of his children. We’ve been apart longer than we were together. We were together for 13 years and then we’ve been best friends for 15,” she said.

Even though Elizabeth Hurley might have said that Hugh Grant was a tad ‘annoying’ while they were together, and Grant told Cohen the sex probably fizzled out near the end of the relationship, Hurley gave Grant a 10 out of 10 in the bedroom while playing Plead the Fifth. “I was with him for 13 years!” she joked in her defense.

3. Would They Ever Get Back Together?

When asked by Jonathan Ross if there was ever a chance that Hurley and Grant would get back together, Hurley was quick to shut it down. “I don’t think that’s going to happen…but he’s the best friend that anyone could have,” she said. We will not accept this answer — we’re still holding out hope!

While on The Meredith Vieira Show, Elizabeth Hurley compared her relationship with Hugh Grant to being like family. “To me, he’s family. He’s like my big brother and you can’t really stop loving family even if you wanted to try, so to me he’s just the best,” said Hurley.

1. They Still Go on Vacations Together

Meredith Vera followed up by asking if their significant others ever get jealous of their friendship, to which Hurley replied: “People have been fantastic. I’m divorced now, but I was married. I’m also best friends with my former husband. But my former husband, Hugh and myself would all go on vacation together. When you’re confident, and my husband was a very confident man, he knew that if I wanted to be with Hugh I could be, but I chose him.” Grant accompanied Hurley, her now ex-husband Arun Nayer, and her son Damian on vacation back in 2008.