The Young And The Restless’ 12 Most Notorious Characters 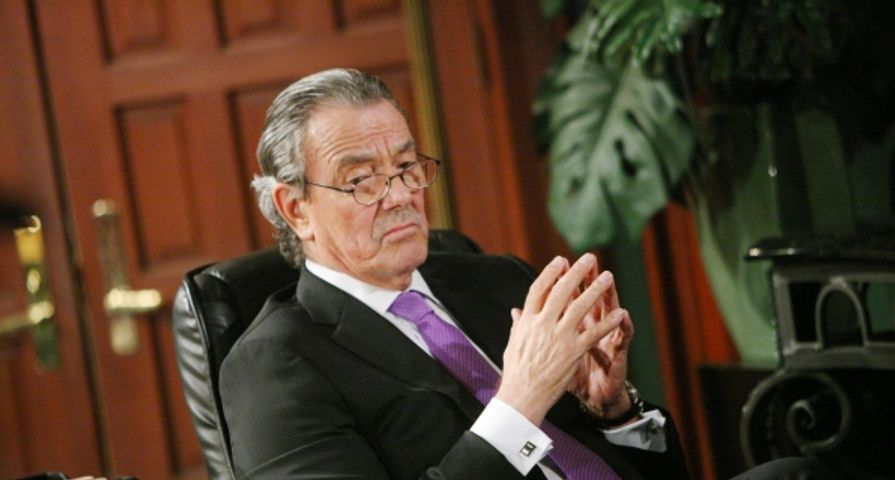 For The Young and the Restless fans, there are a few characters from the past and present who leave a lasting impression. Their notorious deeds have added an interesting and sometimes heartbreaking twist to the story. Though viewers may have hated them at the time or hated what they were doing, they left their mark on the show. Below are some of the most iconic characters of Y&R. These are people that have forever changed the direction of the plot of the show and how we feel about many of the regulars and their situations.

Ricky was born in 2002 to Paul and Isabella. Shortly after, Ricky went to live with Isabella’s parents and was raised by them. He didn’t come back until 2011 when he came to work as an intern for Avery during Sharon’s murder trial. After meeting his half-sister Heather, he took pictures of her kissing Adam. He decided to give her the photos instead of having them published in Restless Style. Phyllis got hold of the photos and published them on the internet ruining Heather’s reputation making her leave permanently. Ricky published another controversial article online and alienated Paul. After Daisy discovers a video of Ricky drowning his ex-girlfriend, she disappears making it appear as though Ricky killed her. Paul discovered an unconscious Eden in Ricky’s bathroom with Ricky holding a knife to her neck. Paul is forced to shoot him in the arm, but he falls out the window and dies.

Carmine Basco was introduced in 2012 when he came to Genoa City looking for his ex-girlfriend Angelina. Kevin was forced to marry her because she fell for him even though the feelings were not returned. Kevin became a target for revenge by Carmine. While attempting to kidnap Chloe to get even, Abby crawled into his trunk. They left town afterward and Carmine and Abby were an item for a while, but Abby dumped him and came back to Genoa City. He came back to town later and started bartending when he met and fell for Lauren. Carmine had an affair with Lauren until she decided to fight for her marriage. He started stalking her, trying to blackmail her and eventually tried to kill her along with himself so they could be together forever. This all ends up with Carmine being shot to death.

Appearing in 2007 as the identical twin of D.A. William Bardwell who passed away, Jeffrey came onto the show at his brother’s wake. His first task at hand was to blackmail his brother’s widow in an attempt to get her to marry him so he could inherit his brother’s fortune. The relationship with his wife eventually turned into something real with Gloria falling for him. However, Gloria gave away half her fortune to charity rather than give it to Jeffrey. Gloria ended up in jail for murder and became penniless while Jeffrey worked to get her a place to stay. After almost accidentally poisoning Jeffrey, he recovered and their love blossomed. Jeffrey’s relationship has preserved for a few years though much of it he spent gambling Gloria’s money away or plotting to get more one way or another. Trust between them is fleeting with good reason.

Kelly appeared in 2013 when Billy met her at a grief support group and they became friends. They bonded in their grief which resulted in the end of Billy’s marriage to Victoria. She began to see Jack whose wife Phyllis was in a coma. It was revealed that Kelly was Stitch’s sister and eventually Jack had Kelly move in with him. After Phyllis woke up, Kelly moved out of Jack’s house feeling out of place. Jack’s indecision between Phyllis and Kelly left her hoping they would eventually marry, but Jack ended it with Kelly and went back to Phyllis. Not one to be pushed aside, Kelly began to terrorize Phyllis and tried to frame her for poisoning her tea. An alliance with Victor resulted in Kelly kidnapping and holding Jack hostage believing he would fall in love with her. She was then mysteriously murdered, perhaps by Jack.

Debuting in 1994, Malcolm is Neil’s half-brother determined to re-establish a relationship with him. Under the tutelage of Blade, Malcolm becomes a world-class photographer. He met Drucilla, who married Neil; however, Drucilla was under the influence of cold medication and one night mistook Malcolm for Neil. Nine months later, Lily is born and Dru convinced herself that Neil was the father. After she forgave Malcolm, he fell in love with and married Keesha just before she dies of AIDS. Olivia and Malcolm then get married right before Malcolm’s ex-girlfriend Callie came into town. Olivia’s jealousy ends the marriage leaving room for Callie and Malcolm to get engaged, but Callie leaves town before they marry. A few love triangles later, Malcolm is presumed dead and is off the show until three years later. His on and off again relationship with Neil eventually leads to Malcolm leaving Genoa City for good.

First appearing in 1980, Patty Williams is the sister of Paul and quite emotionally unstable. She married Jack, lost his child and after finding out he only married her to gain power at Jabot, she shot him in the chest. She has come and gone several times over the years, but never fails to leave destruction in her wake. She dated Danny for a while and accidentally made Traci lose her baby. After plastic surgery, she came back obsessed with Jack. She’s committed may crimes over the years and has been in and out of mental institutions throughout her appearances on the show. She posed as her therapist Emily after she and Jack fell in love and she married him. He later adopted a cat, but it became obvious that she is emotionally unstable when Patty had no reaction to the cat and was returned to the psych ward.

In 2009, Tucker was found for Katherine who had given him up for adoption when he was born. He was a self-made multi-billionaire who struggled to get himself through school because his adoptive family couldn’t afford it. After sneakily getting controlling interest in Chancellor Industries as revenge for Katherine giving him up, he sold off Jabot to Victor and hired Adam and Kevin. He also dumped Jill, who he was dating at the time and when she got Jabot back, he blackmailed her and took it again. He then begins to date Ashley. After he is in a coma, Katherine found out he willed the majority of his estate to her. He married and divorced Ashley and then married Sharon who he used to damage Newman Enterprises. The marriage was annulled and he moved to Hong Kong.

Sheila was a nurse who started working a Genoa City Memorial Hospital in 1990. She fell in love and became obsessed with Dr. Scott Grainger who was married to Lauren Fenmore at the time. She drugged Scott and got herself impregnated with his child causing him to divorce Lauren and marry her. Lauren was also pregnant, but didn’t tell Scott at the time. Sheila’s baby died and she ended up stealing Lauren’s baby and passing it off as her own, leaving Lauren with a black market baby who later died. Eventually, Lauren found out the baby was her son and she got him back. However, she continued to terrorize Lauren several more times, kidnapping her, attempting to kill her, etc. She went so far as to have plastic surgery to look like Phyllis so she could get close to Lauren. Lauren soon figured out which Phyllis was the imposter and shot Shelia.

First appearing in 1990, Drucilla was a runaway who went to live with her aunt Mamie at the Abbott home. She became a model and married Neil Winters, but as mentioned earlier became pregnant with Malcolm’s baby while under the influence of cold medication. She decided to hide the paternity of the baby, even though her marriage collapsed. She then moved to Europe with the child, Lily, but returned many years later when Lily was 14-years-old to get help. However, she ended up helping Neil with his drinking problem and the two remarried until the truth came out about the paternity of Lily. A violent confrontation with Carmen lead to Dru attacking her. She ended up in a mental hospital after a haunting hoax. While on a photo shoot, there was a struggle over a cell phone where Sharon and Dru fell off a cliff. Sharon was rescued, but Dru was never recovered.

Making her debut in 1994, Phyllis first appeared as an obsessive fan of Danny. She drugged him, slept with him and told him she was pregnant with his child. He married her even though he didn’t love her. She then decided to run over Christine with a car, but ended up hitting Paul instead. Later she and Danny divorced and her son Daniel became the center of her life. However he became seriously ill, allowing her and bringing Danny back into her life and reconciling their relationship. They remarried, but ended up divorced again once Danny found out he wasn’t Daniel’s father. After leaving town for a while she came back and started working as a web designer and falls in love with Jack. Phyllis has connived her way in and out of many situations sometimes hurting those she loved most. She was almost killed by Sharon and in a coma for over a year before coming back and marrying Jack.

Born to Victor Sr. and Hope, Adam was first seen as an infant in April 1995. He came back to Y&R in 2008 as an adult freshly graduated from Harvard University. After a few bad relationships, he began one with Chelsea. The couple got married and had a child. Things went sour when he accidentally killed Delia Abbott in a car accident, and he covered things up to protect himself. When he was on his way to turn himself into the police, Billy held him at gunpoint, and he was presumed dead. He just recently returned as Gabe and after months his true identity was revealed and he went to trial for Delia’s death. After being convicted to 10 years in prison, he was hit by a car while leaving the court house and is now fighting for his life.

Born under the name Christian Miller, Victor Newman first appeared on the show in 1980 coming to Genoa City to form the conglomerate Newman Enterprises. He was first marred to Julia and after that marriage became involved with stripper Nicole. He fathered two children with Nikki and they have been married and divorced several times over the last 30 years. His climb to success is the ultimate rags to riches story with him becoming a multi-billionaire. He’s known as a ruthless megalomaniac who will stop at nothing to get what he wants. He’s extremely protective of his family and his antics have caused many upsets over the years, including numerous deaths. Yet, he always manages to fly under the police radar and has fathered children with other women between his numerous marriages to Nikki, but she always takes him back.