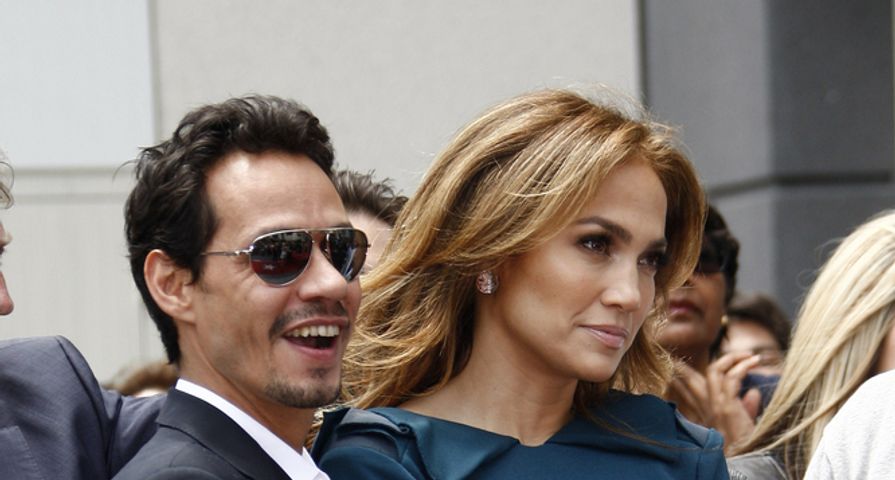 Rebound relationships can be really exciting or really depressing. They really get depressing when the person you’re rebounding with isn’t quite up to par or if you’re missing your ex so much that you can’t appreciate the fling that you’re currently having. Celebrities typically have a lot of choice when it comes to rebound relationships. If they wanted, they could have the best of the best of jump-offs; however, many of them make really lousy decisions when it comes to their rebound relationships. We have rounded up seven, which actually make us depressed. What were these celebs thinking? Couldn’t they have found someone better to rebound with? Apparently not!

Since Paula Patton left him, Robin Thicke has struggled. He initially tried to get her back by dedicating an entire album to her, but that backfired. Six months later, he finally decided move on – with a 19-year-old girl named April Love Geary. She’s officially 20 now, but that doesn’t make the relationship any less creepy. Something that makes his relationship with her creepier is the fact that she looks like a skinnier version of his ex wife.

Geary loves attention. She’s posted pictures on Instagram of herself at the home Thicke and Patton used to share. In one of them, she was in their bed. Thicke’s choice of lady shows that he is obviously still hung up on Patton and isn’t looking for something serious – otherwise why would he date a teenager? Things have been going downhill for him ever since he lost his high school sweetheart and it’s his own fault. When will he realize that dating a teenager won’t fix what is actually wrong?

We all know that Holly Madison really wanted to marry Hugh Hefner and have his children, but he couldn’t give her either of those things. As a result, she began looking for love elsewhere. Rumor has it that she began cheating on Hef with Criss Angel. When it looked like she had a future with the magician, she dumped the Playboy magnate and headed for Las Vegas to be with Angel.

Things got serious pretty quickly between these two. It wasn’t long before they were talking marriage and she also took him to meet her parents. While it was nice to see Madison dating someone who was more age appropriate and not legally married to another women, it seems pretty obvious that this relationship was a rebound. She left Hef to be with him and they then regaled the press with stories about how in love they were and then broke up after only four months. Sounds like a typical jump-off relationship.

Since ending her marriage with Bruce Jenner, Kris Jenner has been shacking up with a much younger man – Corey Gamble. He’s reportedly only 33-years-old and works with Justin Bieber’s manager Scooter Braun. These two met at the designer Riccardo Tisci’s 40th birthday party in Spain and then became a thing. While it is nice that Kris has met someone, why does he have to be young enough that he could be one of her children?

It seems obvious that she’s still reeling from her divorce from Bruce. He decided that he wanted to live his life as a woman and she couldn’t accept that, so their marriage came apart. It must be hard to hear that from a man she spent 25 years with. Gamble is so obviously a rebound – something to make her feel better. If Bruce had never decided that he wanted to transition, we bet she’d still be married to him and the whole Gamble thing would never have happened.

Jessica Simpson had a good thing with Nick Lachey, but she threw it away to live the single life. To be fair, she was pretty young when she married the former boy bander, so she obviously didn’t get to sow her wild oats. After leaving Lachey, Simpson made a series of really questionable romantic choices. One of them was John Mayer. He went through women the way that most men go through socks. He had romanced a bevy of beauties in Hollywood, but had an obvious aversion to settling down. In spite of this, the former reality star still got involved with him.

Most of us were really disappointed. While Lachey was on the marriage track with Vanessa Minnillo, Simpson was letting herself get toyed around by one of Hollywood’s most toxic bachelors. It took a year of going on and off like a light switch, but the “With You” finally learned her lesson and left Mayer for good.

Khloe Kardashian put up with a lot from Lamar Odom. He spent a good year of their marriage cheating on her and abusing drugs and alcohol. It took a lot for her to finally kick him to curb. Many of us were really saddened by the breakdown of their relationship. We really wanted them to work out – somehow.

When she immediately hooked up with rapper French Montana after filing for divorce from Odom, many of us weren’t impressed. He’s reportedly a deadbeat dad who abandoned his family a couple of years earlier and had to be taken to court to give the financial support they were entitled too. Thankfully, her heart was never actually in it. During one episode of “Kourtney and Khloe Take The Hamptons,” she admitted that she wished she was still with Odom. We think French knew this. He was just there to help her move on.

After getting dumped by Justin Timberlake, Britney Spears made some really questionable choices in regards to men. One of the most obvious ones was Fred Durst. According to him, they had a thing back in 2003; however, she never publicly admitted to having a relationship with him, which really irked him. We can see why she denied it – he isn’t exactly dating material and he proved this by going on Howard Stern and giving a rather graphic kiss and tell about their relationship.

We think Spears was just looking for some action when Durst came along. She knew she could never have a real relationship with him – it would be bad for her image. She was supposed to be this young, innocent thing and he was a total dog. The fact that she would even secretly date someone like Durst speaks volumes about how desperate she probably was after splitting from Timberlake.

Jennifer Lopez is a serial monogamist. She always goes from one man to the next – it is how she deals with a bad breakup. She’s been surprisingly open about most of her relationships. She has confessed that Ben Affleck was her first real heartbreak and that Marc Anthony was a rebound. “Ben and I split up at the moment when I thought we were committing to each other forever, it was my first real heartbreak, it felt like my heart had been torn out of my chest,” Lopez wrote in “True Love. “My way of anesthetizing the pain was different. I sought out comfort in another person, tried to find someone who could make me feel loved and wanted in my loneliest hour.”

Lopez went on to call Anthony a “Band-Aid,” which is what we all suspected. Surprisingly, their relationship lasted infinitely longer than all of her others and, when she and Anthony were dunzo, she jumped into another rebound relationship.