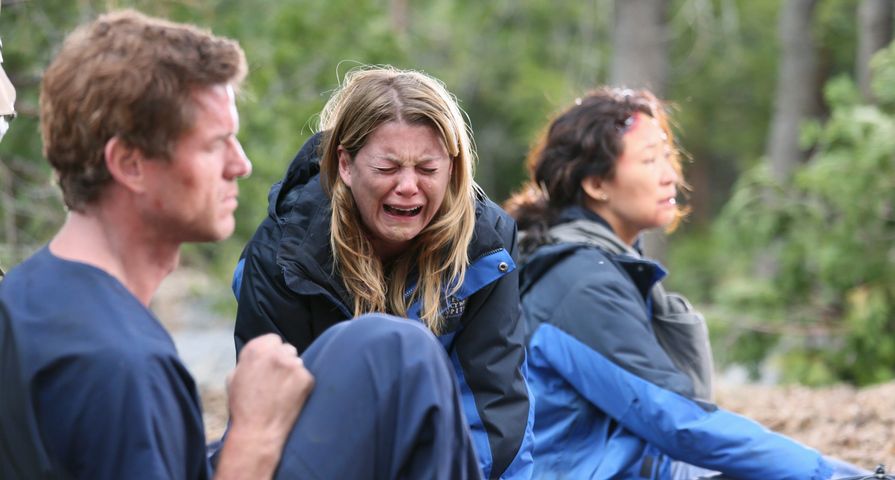 When Shonda Rhimes and ABC launched Grey’s Anatomy back in 2005, there was no way of telling just how huge the show was going to become. Over a decade later and with almost 16 seasons under its belt, it still shows no signs of slowing down no matter how many characters and main stars come and go, and all too often the worst losses and biggest surprises have come at the end of a season. After 15 season finales, fans have seen everything from the ultimate cliffhanger, to the most romantic of gestures, and of course, horrific deaths. Not every season finale episode has been as great as some of the others though, so here are all 15 Grey’s Anatomy season finales ranked from worst to best:

The season 15 finale of Grey’s Anatomy is still sinking in for fans, and for the most part the feeling they are left with is: disappointed. After all the disasters and cliffhangers of previous seasons it seems the only things causing drama in the season fifteen finale was the character’s feelings and dense fog. The episode did have some high moments including Meredith finally telling DeLuca how she felt, but overall season 15 was the worst finale so far.

In comparison to the rest of the earlier seasons of Grey’s, the season seven finale “Unaccompanied Minor” wasn’t nearly as dramatic. Although the episode did leave fans with some shocking moments and cliffhangers after Cristina told Owen she was pregnant but didn’t want the baby and Meredith admitted to tampering with the clinical trial, it simply didn’t shape up to be as exciting or what audiences had come to expect from thrilling, on-edge Grey’s Anatomy finales. Looking back at all of the finale episodes that have aired, “Unaccompanied Minor” reflects more as an average Grey’s episode, which makes it one of the worst finales so far.

Most Grey’s Anatomy fans will agree that the later season finale episodes haven’t been nearly as great as most of the ones that came before them. Season 12’s “Family Affair” turned out to be extremely underwhelming which was disappointing after it looked like all the twists in the main storylines were going to create an epic finale. The episode attempted to turn everything on its head with Amelia reconsidering her wedding to Owen, April going into labor unprepared, and Callie and Arizona fighting, but in the end, it all simply resolved. The only cliffhanger fans were really left with was Karev beating up Andrew, but the consequences wouldn’t begin to be explored until season 13.

In reality, the season 14 finale “All of Me” is a great contender for the worst season finale, but not because it was necessarily a bad episode. The finale was the last episode to feature Jessica Capshaw’s Arizona Robbins and Sarah Drew’s April Kepner after it was revealed the two stars had been let go ahead of season 15. While fans were grateful that neither character was killed off, which is highly unlike Grey’s, they didn’t get satisfying endings either after nearly 10 years. In the end, the only bright spot was Alex and Jo’s wedding and fans wanted a whole lot more from an episode that meant so much to many of the longtime stars and the characters they portray.

Season 13 attempted to bring back the edge-of-your-seat thrills that other Grey’s Anatomy finales had mastered with “Ring of Fire.” The episode wasn’t necessarily bad and the drama was at an all-time high as Grey Sloan seemingly burned to the ground, but in the end nothing really happened, as loose-ends and dire situations were tied up easily, such as Stephanie just happened to find her key card at the last minute, and Owen finally accepted that his sister was alive.

There was no way the season 11 finale of Grey’s Anatomy was going to live up to the emotional impact fans had suffered a few episodes earlier with the loss of Derek Shepherd. As audiences were still reeling from his death, the following episodes seemed lackluster, meaning “You’re My Home” didn’t cause too much of a stir, especially in comparison to other finales. In fact, the best/worst part of the finale was Meredith sharing Derek’s last phone message with Amelia which marked Derek/Patrick Dempsey’s last actual scene. The entire episode seemed very average and almost had too much closure as it felt like Shonda Rhimes was simply wrapping up the series as “How To Save a Life” was played and the ending was happy as Meredith danced again.

The season 10 finale, “Fear (Of The Unknown),” was devastating as it featured a major loss to the show, but thankfully not a major death. “Fear (Of The Unknown)” marked Cristina Yang’s exit from Grey Sloan Memorial and also marked a change in Grey’s Anatomy forever. No other recurring character has been able to replace the void that Sandra Oh’s Cristina left and, while it was a good finale, the negative effect her departure has had on the show as a whole is why it is ranked as one of the worst finales. Since Cristina’s exit from the show was so tame, the only really exciting thing to happen was when Maggie decided to drop the bomb that she is Ellis Grey and Richard’s daughter. The finale is also one of the worst because it began the infamous fight between Derek and Meredith about his Washington job which was one of the couple’s most annoying storylines.

When a finale is broken into two parts, fans know it is going to be good! Season four’s “Freedom” took up two weeks, but after it was all said in done, the finale was extremely anti-climatic. With some storylines definitely pulling at viewers’ heartstrings with the boy trapped in cement and the young couple in Meredith and Derek’s clinical trial, in the end, the finale didn’t seem worthy of two parts. The drama didn’t go above and beyond anything considered normal for Grey’s Anatomy, but credit has to be given to one of MerDer’s biggest moments when Meredith set up the house of candles in her big grand gesture towards Derek.

Heading into the middle of the rankings is when we get to the best of the best of Grey’s Anatomy finales, so while season three’s “Didn’t We Almost Have It All” is only at number seven, that is not saying it wasn’t a great finale. The emotions of the finale were at an all-time high and fans watched in stunned silence as Cristina’s uncharacteristically extravagant wedding quickly turned into a disaster both humorously with her eyebrows getting removed and completely devastating when Burke left her at the altar. What still sits with fans after all this time, however, is Cristina’s breakdown after Burke leaves her, culminating in so much raw emotion that made the whole situation and Cristina’s grief seem unbearably real. The scene was one of the finest examples of Sandra Oh’s true strength in acting and her perfect portrayal of Cristina Yang.

For Grey’s Anatomy fans looking for drama, suspense, and intense situations, then the season nine finale “The Perfect Storm” was one of the best Grey’s Anatomy finales of all. In the finale, a massive storm causes a hospital-wide power outage which causes unending chaos. Between Jackson diving into a wreckage, Meredith’s life being in peril while delivering her son, Callie finding about Arizona’s tryst with Lauren, and Cristina breaking up with Owen, things were about as suspenseful and dramatic as it gets, but it only got worse when Webber got electrocuted while trying to fix the breakers in the basement. The entire episode had audiences in shock with every twist and turn, and then, of course, they were left on edge with the question of whether or not Webber died.

The entirety of season two is one of Grey’s Anatomy‘s best seasons, so it isn’t surprising that the finale episode, “Losing My Religion,” also stands as one of the best finales out of them all. As one of the best minor characters to grace Grey’s, fans and Izzie were forced to say an emotional goodbye to Denny Duquette after he proposed. The image of Izzie crying uncontrollably all dressed up for prom until Alex has to carry her away is one of the show’s most memorable moments. Of course, Denny’s death is only a part of the huge finale when Meredith finally has to decide between Finn and Derek, and Burke deals with the fact he has a tremor in his hand which compromises his career.

Things started to change the most for Grey’s when the original group started to leave and the season five finale “Now or Never” saw two of the original stars in peril. At first, the finale looked to be rather calm for a Grey’s finale but things took a turn when Izzie starts to flatline after her surgery all the while Meredith is trying to figure out the identity of John Doe who was unrecognizable after a bus accident only to discover it is George! How quickly the episode went from calm to completely stressful and sent fans’ heads spinning and, of course, it ended in the ultimate cliffhanger when it wasn’t clear whether Izzie had survived.

With everything that has come to pass since season one, the season one finale “Who’s Zoomin’ Who?” is often overlooked, but it’s importance to the series as a whole can’t be discredited. Before all of the finales which left us with hospital disasters and shocking deaths, the whole fanbase was hooked on the saga of Meredith Grey the intern and Derek Shepherd the renowned surgeon. The end of the episode revealed exactly how fast Shonda Rhimes can throw a curveball when Addison Montgomery shows up claiming herself to be Derek’s wife as the episode came to an end. Without the first example of the cliffhanger and surprises the show could throw at fans, maybe the 13 seasons after would never have happened. It may have been a less dramatic finale in comparison to others, but as the first, it was epic.

Few Grey’s Anatomy episodes have evoked as many emotions as the season six finale “Death and All His Friends” did. The finale took the hospital disaster scenario to an entirely different level when an angry gunman goes on a rampage in the hospital as Derek, Owen, Alex, Reed and Charles are all shot. The stress of the intensity of the episode left fans feeling completely exhausted as Meredith also miscarries her baby and Cristina operates on Derek with a gun pointed at her head.

With the gunman storyline being so emotionally devastating, fans didn’t know things could get even worse but it happened with the season 8 finale “Flight.” The episode invoked everything that makes Grey’s Anatomy one of TV’s most successful shows as it played with fans emotions, abruptly killed off main characters and left others in peril, all while keeping fans completely hooked. Out of all the devastating Grey’s exits, it was Mark’s goodbye to Lexie after she died in the plane crash that still resounds with fans. With all of the disasters and chaos that have impacted the doctors at Grey Sloan, there is no doubt that the season eight finale plane crash was one of the most pivotal moments in the show’s history and shaped many storylines to come even several seasons later.