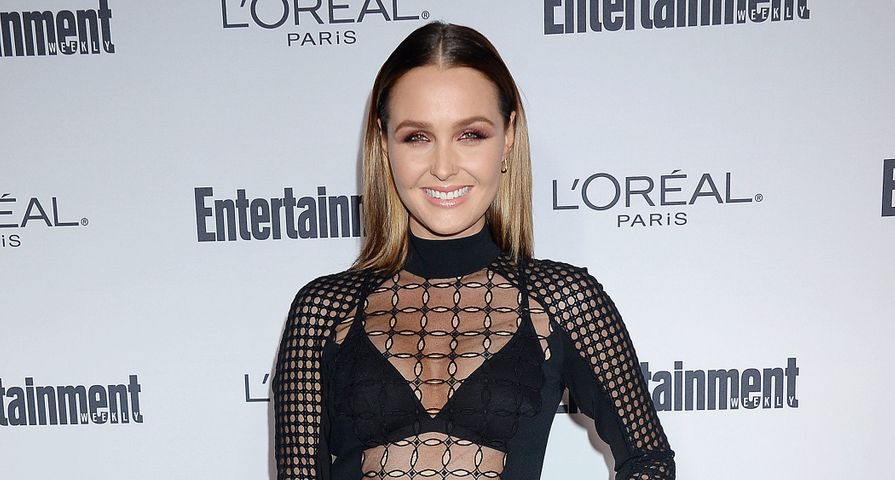 Camilla Luddington has been gaining a lot of popularity in recent years ever since she broke onto the scene with roles on huge shows like Californication, True Blood and now Grey’s Anatomy. The Grey’s star is also well known for being the voice and motion capture of Lara Croft in the Tomb Raider video games which leads us to believe we can expect to see a lot more from her outside her role as Jo on the ABC’s hit medical drama. There’s a lot that people don’t know about her, so check out these 10 facts about Camilla Luddington:

9. She Likes to Paint

One of the great things about Camilla Luddington is that she’s insanely talented, not only on-screen but also off-screen! The gorgeous star is totally creative and is surprisingly a bit of an artist! In an interview with Reel Spin, she revealed that she loves to oil paint! “I love to oil paint. I have 5 paintings hanging in my home that I painted myself. Right now I have a whole new set of oils, but I’m out of canvas and dying to get to an art shop and pick some up. To me it’s so relaxing. I like sitting on my balcony, playing music, and getting inspired,” she said.

She was born in Berkshire, England, but moved to Texas when she was 14-years-old. To this day she still moves back and forth between the two countries frequently but has said that she loves living near the beach which is why she now permanently lives in Los Angeles. “I don’t think most people know that I’m English. I still get literally every day: ‘Oh my God, you’re English?'” Luddington said in an interview with Who What Wear. According to her IMDB profile, the reason she masters the American accent so well is because she grew up watching American television and because she’s lived in various places throughout the U.S. like Texas, Pennsylvania, New York and now Los Angeles.

Camilla is a huge fan of video games which is why she jumped at the opportunity to lend her voice and do motion capture for the 2013 Tomb Raider video game as Lara Croft. She also did the 2015 release of the same game called Rise of the Tomb Raider. Luddington admitted in an interview with Maxim that she never played the original game growing up because she was too young, but her older brother was a big fan and he would sometimes let her play. She once had to spend an entire day acting out various death scenes which is a far cry from her daytime role as a surgical doctor on Grey’s Anatomy! “I joke all the time that for my day job I save peoples lives and at night I kill people. There’s something so fun about playing a heroine in a video game, which there aren’t really many of, and in these games they go back and tell her origin story, so it’s interesting to see that character arc and that transformation,” said Luddington.

Her character Jo was only supposed to be a recurring character on Grey’s Anatomy, but she was so well liked by fans that she became a series regular from season 10 onward. She revealed she was a huge fan of Grey’s before she was cast on the show so working with actresses like Ellen Pompeo was totally nerve-wracking for her. “I’m surprised she likes me because I was such a geeky fan. When I got on the show, I was like, ‘Oh my God, it’s Meredith Grey.’ …I’m surprised she doesn’t have a restraining order out against me,” she joked. “I was already a fan of Grey’s so I completely geeked out. I geek out daily on set. I go into Meredith’s house and I point to the fridge and say ‘oh my God that’s where Izzie put her check!’ It was amazing. It’s so fun to be on a show that you’re a fan of,” she said in an interview with Shape.

Camilla Luddington is a relatively new actress. Her breakthrough role was in the Lifetime biopic William & Kate when she took on the role of Kate Middleton. She was chosen for the part not only because of their resemblance but also because they have similar backgrounds! “We grew up in the same area in England. We both grew up in Berkshire. She kind of, just in a way had a very normal similar upbringing to me. There was nothing very aristocratic about her beginnings, as such. I think we still see that girl even now…I love that sense of normalcy about her,” Luddington said.

In an interview with Who What Wear, Luddington was asked to reveal something strange about herself that many people wouldn’t know and she chose to divulge the fact that she hates drinking water! In order to make sure she gets her daily dose of water she has to mix it with juice or powder in order to jazz up the flavor. “I feel like I have to have like five crystal lights in it before I can even bring myself to drink it. It’s just boring. Like even in the morning, I have to mix half juice and half water. It’s a really bad habit, and I know it is. I read these blogs that say you have to drink it, but to me, it’s like eye roll,” she said.

We all have our guilty pleasures and Camilla Luddington is no different! She admits that her favorite thing to watch on television isn’t Grey’s, but rather The Bachelor! She said her entire schedule can revolve around The Bachelor and Bachelor in Paradise. “The Bachelor. I’m completely obsessed. I feel emotionally involved every season. I feel like I’m also dating him, I feel like I deserve a rose. Like already I’m talking about The Bachelorette and the fact that there are two, and I totally love Britt. I’m looking for her pinky lipstick she was wearing — I don’t know where she got it from, but I want it. That’s my obsession,” Luddington said in an interview with Who What Wear.

Camilla Luddington has two brothers, Daniel and Joey, as well as a younger sister named Amy. Growing up Camilla was obsessed with the Ricki Lake Show, so much so that she dressed her young brother and sister up and pretended they were on the show.

Luddington admits that she hates to exercise, but it’s something she tries to make sure she does every day. Working on Grey’s means long days that can be up to 16 hours so there’s not a lot of time for working out so she focuses more on diet than exercise. “Something I picked up on set of Grey’s that people were doing was pressed juices. Sometimes when I feel like I need a detox, if I’ve been out to a friends birthday or something and I’m not feeling so great the next day and I’ve had that cake or whatever, I’ll juice for a day. That’s kind of my go to. Also I try to cut out dairy. I went vegan for a long time after reading a book called “Skinny B-tch” which was incredible. Since then I try to avoid dairy and for me that also helps my skin,” she said in an interview with Shape. She also stated that since she started playing Lara Croft in the Tomb Raider video game she did have to start mixing in some workouts in order to gain the strength to act out her role.

Going heavy on the greens today.   A photo posted by Camilla Luddington (@camillaluddington) on Apr 14, 2015 at 2:26pm PDT