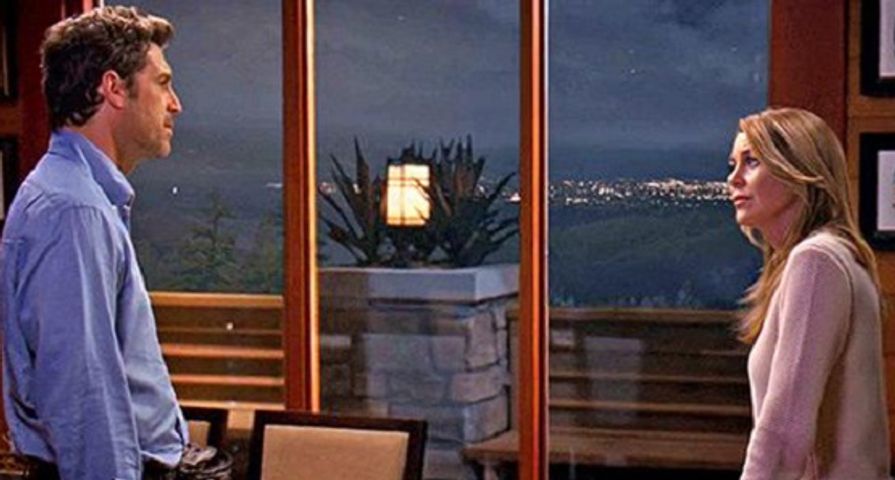 Grey’s Anatomy may be mostly focused on Meredith Grey, but that doesn’t mean she is the easiest character to like all the time. While she has definitely been through more than her fair share of truly terrible situations, so have a lot of the other seemingly very unlucky doctors at the hospital, yet she continues to act like she is the only one to have suffered. Many times Meredith Grey is an inspirational character but it seems just as often she has gotten on fan’s nerves and is also widely considered as one of the show’s most annoying characters. Love her or hate her, here are Meredith Grey’s 9 most annoying moments on Grey’s Anatomy:

It may be hard to remember now but the early seasons of Grey’s Anatomy were consumed with George’s love for Meredith. His pining was obvious to everyone except for, of course, Meredith herself and without a doubt she handled their situation horribly. Despite the fact that he had way more feelings for her than she did him, Meredith slept with George, and cried during. Instead of owning up to not having the same feelings, she used George, someone who had been nothing but an amazing friend to her, to try to make herself feel better even though it would break his heart. While it is a small instance out of Meredith’s annoying moments, it was one of the first which truly displayed her selfish behavior which would become one of her defining character traits.

8. Being a Doctor (Early Seasons)

Over the years, Meredith Grey has become one heck of a surgeon, that much cannot be denied, but in the early seasons, many viewers had some concerns. While others, mostly George and Christina were focused on their internship and caring for patients, Meredith was constantly preoccupied with the drama going on in her personal life. There were times when her sadness over Derek meant Christina and Izzie had to literally lead her around, and the scary part was she still acted as a doctor for patients even though she was probably in no mental state to. It was annoying to watch someone who was very clearly a potential danger to patients simply muddle through her very serious job just in order to get back to obsessing over Derek Shepherd.

As much as Grey’s Anatomy is the love story between Meredith and Derek, going back to early seasons their relationship was anything but adorable. The storyline of them being together or not being together was dragged out and finally in season two Derek made the decision to try to repair his relationship with Addison. Despite Derek’s decision and Meredith getting together with the sweet, charming and lovable Finn, fans couldn’t help but roll their eyes when Derek and Meredith hooked up in an exam room while at the prom that the hospital was hosting for Dr. Webber’s niece. While the blame is just as much on Derek as Meredith, to this point Derek had not proven to be that great of a guy, and Meredith had a fantastic guy in Finn, yet she went and slept with Derek while Finn was only steps away in the hospital and had just finished telling her she’s the first woman he had seen a future with since his wife died. Definitely not one of Meredith’s best moments by any means.

After many other tragedies affecting Meredith and the other interns, season three saw Meredith’s first serious brush with death in episode 16, “Drowning on Dry Land.” While it made for some of season three’s most dramatic moments, many began to question just how Meredith drowned. To many fans, it seemed as if she had just stopped swimming and fighting. Whether it was a suicide attempt or not, it was a frustrating moment for the character, and her behavior afterwards caused yet again, Derek to question his relationship with her.

While Meredith’s character definitely grew on many as the seasons have gone, she still has instances that flashback to the selfish and often whining young intern from early seasons. For most of their relationship, it had often seemed like Derek putting in more effort than Meredith and because of her ever-changing moods he could rarely say or do the right thing. In season 11, the beloved couple’s relationship came under one of its biggest strains when Derek had the opportunity to move to Washington D.C. and Meredith was also offered a job there. While the decision would be huge for them and their family, Meredith once again made it all about her and essentially did not give Derek even the option really to take the job if he still wanted their marriage.

Derek Shepherd’s death was one of, if not the biggest defining moment of Grey’s Anatomy. Naturally, the character most devastated by his death was Meredith, but not everyone has supported how she acted following his death. Many have felt that Meredith had no right to make the decision to pull Derek off of life support with notifying his family and many sisters who had been introduced to the show. It was also extremely annoying and frustrating when she simply took off with only a note saying she and the kids were safe and no one heard any word from her for months. Given Meredith’s mental state in the past as well as the gravity of the situation, there really was no telling that she and the kids were safe, and while Derek was her husband, she wasn’t the only one who had to mourn him, and simply taking off was extremely selfish.

There is no doubt that as the leading character, Meredith has always been interesting and most fans do love her, but no one can deny that her whining, especially in the early seasons grew tiring quickly. After awhile hearing “I’m dark and twisty,” “I’m broken,” and “I’m dark and cloudy” began to get particularly annoying because prior to her own beliefs not everything was “woe is Meredith.” Meredith had a difficult life and her relationship with Derek was very hard on her in the beginning but it seemed she failed to realize that she wasn’t the only one with problems, and not everyone wanted to be reminded of her problems every other second.

The love story between Meredith and Derek was something that fans held on to for 11 seasons, and have continued to hold on despite his death, but it did not go unnoticed that Meredith seemed to fight as hard as possible against being happy. After finally beginning their relationship for real after a rocky start, it soon became a trait of Meredith to make sure to pick a fight if things were going well. Again, Derek was by no means innocent in all of this, and all marriages have problems, but it seemed she secretly thrived off of drama between them, and it could get quite exasperating for viewers.

More recently, Meredith really angered fans with how she dealt with the love triangle concerning herself, her half-sister Maggie and Nathan Riggs. Despite at first rebuking Riggs out of loyalty to Owen, she ended up hooking up with Riggs quite a few times and things became more complicated due to the fact that Maggie had feelings for Riggs. Instead of being an adult, and honest with Maggie, though, even after Maggie pleaded with Meredith to just be honest, Meredith went behind her back and actually told Riggs to reject her. While fans had gotten used to Meredith leading on men, she was already too old for that when the series started and should have been way past that by season 13, she continued the annoying and selfish behavior