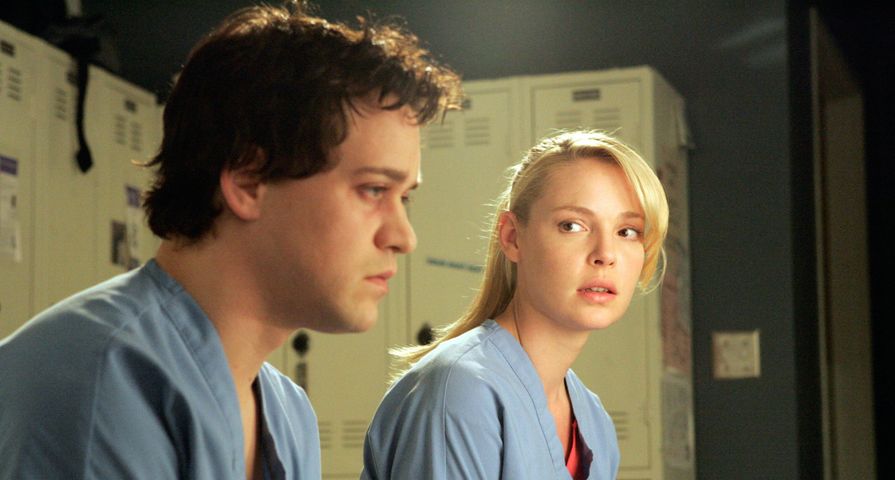 Grey’s Anatomy has seen a lot of drama thanks to a creative team of writers and a revolving cast of characters’ coming in and out of the doors at Seattle Grace (Grey-Sloan Memorial) Hospital. Over the course of 14 seasons, the show has gone through a lot of hook-ups, relationships and marriages and it seems nearly every character has hooked up with every other character, creating a complicated and lengthy list of Grey’s couples. While some pairs were meant to be and had fans cheering for them every step of the way, other couples were almost cringe-worthy to watch and had viewers just wishing the storyline would stop because the characters were so bad together. With so many variations of couples on the show, there is no way every one of them would work, and these 11 were the absolute worst.

In all fairness, it was a little hard to decide if there actually could be something between Alex Karev and his patient Ava/Rebecca due to her mental state, but from what fans saw, there was no room for chemistry. Alex had always been a carefree womanizer, and while he had a soft side, there was no way this relationship was going to end up in a good place and didn’t seem to work from the beginning. There had been believable relationships between the doctors and patients before, but unfortunately this pairing just wasn’t one of them.

Both Callie Torres and Mark Sloan were amazing additions to Grey’s Anatomy and, while we appreciated their love for each other as friends, their hook-ups made no sense. They had great chemistry as the best of friends, but their sexual relationship made the best friend status weird and the fact they platonically had a baby, no matter how adorable or well handled, was awkward. These two were great to watch together except for when it came to the casual hook-ups.

Poor George O’Malley finds himself on this list a couple of times, but first with the scrub nurse Olivia. Olivia was odd and everyone thought George could do better, and they were right. Maybe because George was timid and a little strange, it just didn’t work having him be with someone who was similar and if things weren’t awkward enough between the two of them, she gave him syphilis.

Not that relationships with a big age gap don’t happen, but more often than not they are hard to watch on TV, which is the case for the characters of April Kepner and Robert Stark. It was creepy when it became clear that Stark had a thing for the much younger Kepner and it was just so very hard for fans to believe there was mutual attraction there. It took Stark forever to make a move on April, which in itself was weird, but luckily even she knew there was nothing between them and broke it off because she only considered him a friend.

Even Bailey has had her fair share of hot hook-ups over the many seasons. Her ex-husband Tucker was totally believable for her as was her second husband Ben; however, her fling with the nurse, Eli, just didn’t work. Bailey was too impressive and respected to be with a man who spouted such lines such as, “Inside the hospital, you’re the man, that’s the protocol. Outside the hospital, I’m the man. I am the man. Me. And you can call me Cro-Magnon or old-fashioned, but that is not going to stop you from me taking you home to my bed tonight and showing you what kind of man I am.” While that line would be “hot” in some situations, not when you’re talking to Miranda Bailey who can call the shots both inside and outside the hospital, and his attitude made the chemistry fizzle.

Sometimes it is hard making another couple work on a show after the characters had been in such great and beloved relationships before. Stephanie and Jackson were cute and had the potential to definitely work had it not been for Jackson’s previous relationship with April. Compared to that history and watching April and Jackson together so often, it was clear that Stephanie and Jackson just didn’t have the same chemistry for a deep love like he had before. That much was made clear by Jackson himself as he very obviously wasn’t over April.

Leah and Arizona were a bad couple for quite a few reasons, one of which happens to be an extreme lack of chemistry between the two. While it would be hard having chemistry with someone like Arizona, it might be even harder with someone as unstable as Leah. The relationship was clearly formed to anger fans of Callie and Arizona who were already trying to recover from Arizona’s affair with Lauren. The fact fans had watched Leah go through a lot of drama with Alex meant there wasn’t a lot of chemistry between her and Arizona, as Leah just fell hard for anyone who gave her attention. The issue of no chemistry was made worse by the fact Arizona was never that into Leah, which of course resulted in her scary obsession.

Many fans loved George and Callie, but the truth is there wasn’t much realistic sexual chemistry between the two for it to be a believable pair, let alone a believable married couple. The two were extremely sweet to each other and had many adorable moments, but always seemed more like caring friends than a romantic couple, which was played out on the show as it didn’t take long for the relationship to fall apart because of George’s feelings for Izzie.

Cristina and Burke were a great couple and although many were sad to see it end, her relationship with Owen became another great love on Grey’s. While those two not only made sense, but in all ways worked in terms of characters and their personalties, one that definitely didn’t was Cristina Yang and Shane Ross. Even as a meaningless hook-up, it didn’t make sense that Cristina would go for Shane, but as fans have learned over the years, Shonda Ross likes to combine the most random of characters for flings or relationships and Cristina was no exception.

Clearly this one was going to be near the top of the list because just how awkward it was when it did happen. Such as the case with most of George’s other romantic endeavors. He and Meredith made excellent friends, but there was no believable sexual chemistry between the two. The two were incompatible in so many ways yet they still decided to hook-up which drove home the point that it was not going to work due to the fact it was actually a cringe-worthy experience. If it wasn’t bad enough, Meredith actually cried during sex, but told George he should keep going. It’s hard enough to remember let alone actually watch.

Last but certainly not least is of course George O’Malley and Izzie Stevens. The buildup towards a relationship between these two was amazing and seemed to be gearing up towards one of Grey’s most amazing love stories. It turns out, however, this was a serious case of “be careful what you wish for,” as once it happened it was everything but the stellar romance everyone expected. Once they were a couple it was awkward, uncomfortable and highly confusing how, after so much built up tension, nobody including fans, realized there was no actual sexual or passionate chemistry between the two. While this happens in all many shows, this one had to be one of the most disappointing for fans.