Home » Entertainment » Celebrities » Cast Of Just Shoot Me!: How Much Are They Worth Now?

Cast Of Just Shoot Me!: How Much Are They Worth Now? 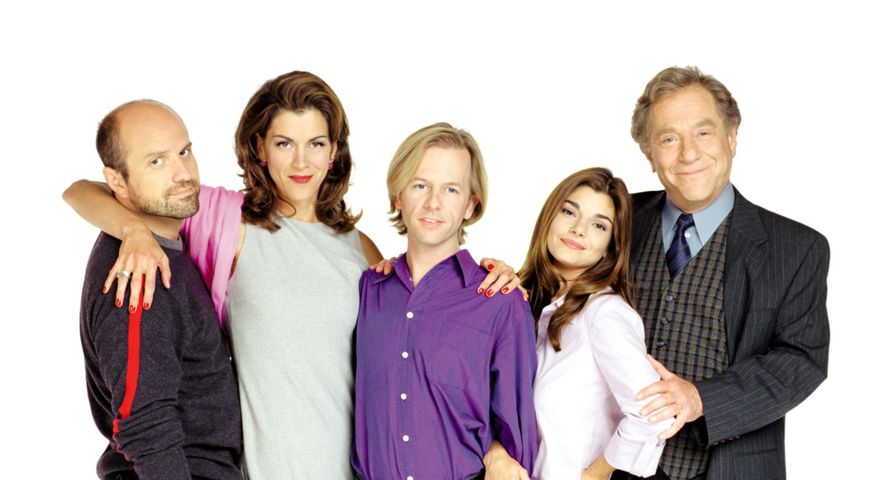 Just Shoot Me! was a hilarious American sitcom starring David Spade and followed the lives of staff who worked at the fictional fashion magazine, Blush. This NBC series was so successful during it’s first season that the network aired all of the episodes within the first month! The show maintained its success throughout all seven seasons and even took over the highly coveted Seinfeld time slot after that series finished, and those are some big shoes to fill! It’s now been nearly 13 years since the series ended and many of the main cast members have moved onto new roles on other shows. Here’s a look back at how much the cast is worth now to see how far their careers have grown:

Estimated Net Worth: $1 million. Brian is a film and television actor best known for his comedic roles. In addition to acting on screen, he is also a producer, writer and voice actor! Brian’s biggest roles have been as Jim Kuback on WB’s Mission Hill and as Brian Spukowski on The Sarah Silverman Program. Brian’s made appearances in approximately 30 films over his career — his most notable appearances have been voicing a role in Scooby-Doo! Abracadabra-Doo and Sarah Silverman: Jesus is Magic. He’s had small roles in feature films like Grind, Sex Drive, The Five-Year Engagement, and Run Ronnie Run! which he also was a writer. Posehn was a writer behind the scenes of shows like Nick Swardson’s Pretend Time, Metalocalypse, Human Giant, The Man Show and Mr. Show with Bob and David. He hasn’t had any starring or leading roles on shows, but he’s done long term appearances on Just Shoot Me!, Mr. Show with Bob and David, Mission Hill, 3 South, The Sarah Silverman Program and Sym-Bionic Titan. Posehn has also done brief appearances on shows like Community, New Girl, The Big Bang Theory, Friends and American Dad! His low net worth is surprising considering his resume is stacked with credits, but it’s probably because he tends to take on smaller roles. His estimated net worth sits around $1 million.

Estimated Net Worth: $3 million. This Canadian actor is well known for his various roles on television. He’s best known for playing Elliot DiMauro on Just Shoot Me!, as well as Keith Mars on Veronica Mars, Sergeant Greg Parker on Flashpoint and a leading role on Remedy as Allen Conner. His other notable television roles were on Hope and Gloria, The Mysteries of Laura and Person of Interest. He’s done plenty of one episode appearances on shows like Rookie Blue, Bones, Hot in Cleveland, Numb3rs, and CSI — just to name a few. Colantoni landed roles in many films, but he’s had starring roles in film projects like Veronica Mars, The Chaperone, Weather Girl, Sherman’s Way and The First $20 Million is Always the Hardest. Enrico’s got plenty of starring and leading roles under his belt which has done well for his bank account because he’s now worth an estimated $3 million!

Estimated Net Worth: $16 million. This former model turned actress is well known for her voice overs and comedic television roles. Malick is credited with roles in over 45 films! She’s had starring roles and voice over roles in the following feature films: Jewtopia, What Happens Next, About Fifty, Adventures of a Teenage Dragon Slayer, Brother Bear 2, Kronks New Groove, The Emperors New Groove and Racing Stripes. Television is Malick’s real niche and he has recurring and series regular roles in Trauma Center, Baywatch, Dream On, Good Company, Just Shoot Me!, Fraiser, Fillmore, Jake in Progress, Big Day, Hot in Cleveland and Rush Hour. She’s done tons of voice work on television shows and made appearances on hit series like CSI, Law & Order, Seinfeld, NYPD Blue, and Reba, to name a few. She’s had an extremely successful career with plenty of starring roles on television making her a widely recognized actress in the industry. All of her hard work has earned her an estimated net worth of $16 million!

Estimated Net Worth: $10 million. George Segal is an extremely seasoned actor who began his rise to fame back in the ’60s. He’s been in nearly 65 films over the course of his career! Segal’s most acclaimed roles have been in Ship of Fools, King Rat, Who’s Afriad of Virginia Woolf?, Where’s Poppa?, The Hot Rock, Blume in Love, A Touch of Class, California Split, For the Boys, and Flirting with Disaster. He has a long list of television credits, but he’s most widely recognized for his roles on Just Shoot Me!, Retired at 35, Murphy’s Law and The Goldbergs. He’s also appeared in shows like American Dad!, Law & Order, Boston Legal and Caroline in the City. George Segal has secured some respectable roles in the past in classic films with many Golden Globe nominations and even two wins! He’s worked hard to gain a reputation and it’s all paid off because he’s now worth an estimated $10 million!

Estimated Net Worth: $6 million. This actress has had two notable television roles, first on Just Shoot Me! as Maya Gallo. This role earned her a Golden Globe and Satellite Award nomination. Her other main casting on TV was more recently in Saving Grace as Rhetta Rodriguez. She’s also appeared in popular series like The Mentalist, Veronica Mars, NCIS, Hot in Cleveland, Medium, and The Equalizer. Her most critically acclaimed film role was in Sex, Lies and Videotape which earned her multiple nominations and awards. She’s also had a role in the widely popular romantic comedy, Pretty Woman alongside Julia Roberts and starring roles in The Meddler, Least Among Saints, Checking Out, Stuart Saves His Family, Quigley Down Under and Once Around. Laura San Giacomo has been acting for nearly 30 years and landed some pretty great roles. In order to bump her net worth a little higher she’ll need to take on some more main castings in television, but she’s doing quite well for herself already with an estimated $6 million.

Estimated Net Worth: $40 million. David Spade is an iconic comedic actor. His career blew up around the time he started working with former comedian Chris Farley — these two were the best comedic duo ever! Sadly, Farley passed away far too early, but Spade managed to continue to build up his career and is now well known for his roles in Tommy Boy, Black Sheep, Joe Dirt, The Emperor’s New Groove, Grown Ups and television series like Rules of Engagement, Just Shoot Me! (which earned him many nominations) and 8 Simple Rules. In addition to those leading roles on television, he’s done many guest appearances on shows like Baywatch, Curb Your Enthusiasm, Hot in Cleveland, Entourage and Crowded. While working on the sitcom Rules of Engagement he was making an estimated $150 thousand per episode! Not bad! In addition to acting, Spade is a successful comedian. He was thrust into the spotlight after working on Saturday Night Live for six years as a cast member and writer. He even won an Emmy for Outstanding Writing in a Variety or Music Program. He wrote and produced Joe Dirt 2: Beautiful Loser and wrote the films Dickie Roberts: Former Child Star, Joe Dirt and Lost & Found. His long list of acting and writing credits have earned him a huge estimated net worth of $40 million!