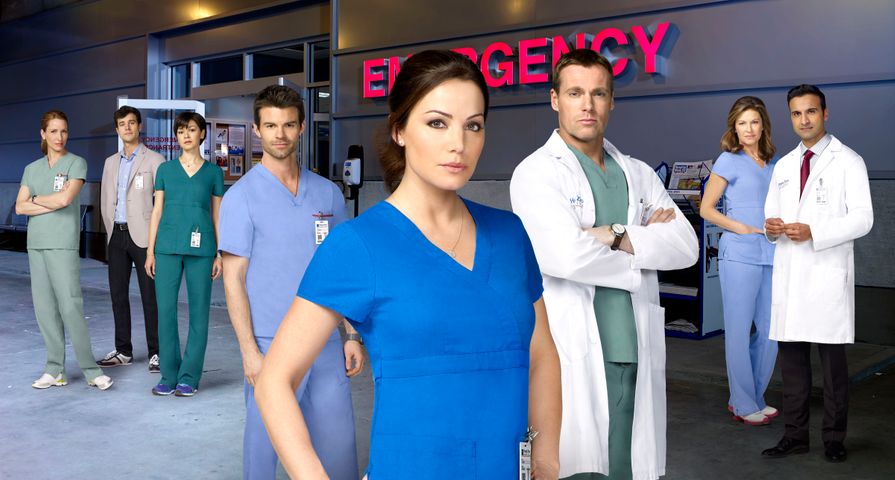 CTV’s Saving Hope broke the mould with the onslaught of medical dramas by adding in a supernatural theme to make things even more dramatic and intriguing. The show has quickly become a hit, especially in Canada, and through mixed reviews from critics has gained a loyal legion of fans since its premiere in 2012. Check out 8 things you didn’t know about Saving Hope! Be warned-there may be a few minor spoilers ahead!

Saving Hope has quite a few ties to Canada. The show is based in Canada, and is also filmed in Toronto, Ontario, Canada, and a few of the cast members are Canadian as well. Both Michael Shanks (Charlie) and Benjamin Ayres (Zachary) grew up in Kamloops, British Columbia. Erica Durance (Alex) is also from Canada, hailing from Calgary, Alberta.

Saving Hope‘s co-creators Malcom MacRury and Morwyn Brebner are known for their work on series such as Republic of Doyle and Rookie Blue, but as mentioned Saving Hope is something completely different. In describing the show’s conception, the Los Angeles Times wrote that MacRury and Brebner are “trying to combine a doctors-in-love medical soap opera modeled on Grey’s Anatomy with something completely different, a paranormal ghost story with elements of A Gifted Man and Ghost Whisperer.”

Canadian broadcaster CTV picked up the show without question, while American broadcaster NBC was convinced to do the same; however, the reception in both countries was vastly different. In Canada, Saving Hope had the highest number of viewers for the summer season in 2012 when it premiered, meanwhile the premiere did attract 3.1 million viewers for NBC, but that number was unimpressive by critics standards.

As well as taking on the lead role of Alex Reid, Erica Durance has also expanded her career as a producer of the show, and it is making her think a career behind the camera might be in the works for her. “I’m just at that point where I’m allowing myself to think that that could be a possibility, but I’d have to gather a team of people who have a similar vision. I’m looking to tell a good story. I’m looking for good female characters to support and show in a 3D way, not just as the girlfriend or the best friend or the ex.”

Fans of Daniel Gillies will know that he had two major roles overlap after he was cast as Elijah Mikaelson on The Vampire Diaries and then the spin-off The Originals, as well as landing the role as Dr. Joel Goran on Saving Hope. As it turns out Gillies was having difficult juggling two full-time roles and had no time to spend with his family, forcing him to make the decision to pick between Saving Hope and The Originals. He, of course, chose The Originals which is why his character was killed off.

Now that fans know that Gillies’ character is definitely gone, it is already predicted many will be mad at the decision, but Benjamin Ayres, who portrays Zachary Miller, has stated with a show such as Saving Hope that doesn’t necessarily mean Gillies (Joel) is permanently gone. “There’s absolutely a chance that Joel could be on the show as ghost,” Ayres stated.

It is pretty clear that Erica Durance as Alex Reid and Michael Shanks as Charlie Harris have some definite chemistry which could be because they have worked together before. Back in 2004, they worked together for the first time when Durance appeared in an episode of Stargate SG-1. They then reunited in 2010, two years before Saving Hope, when Shanks appeared on Smallville as Hawkman which Durance starred in as Lois Lane.