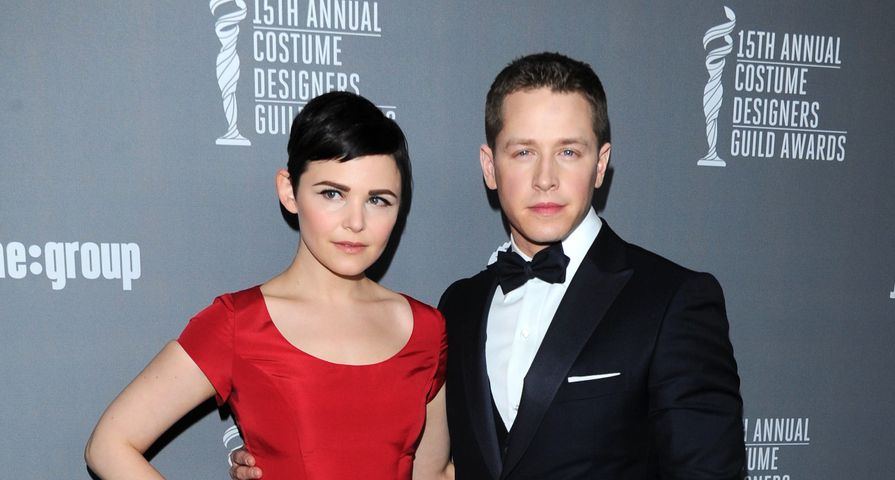 Ginnifer Goodwin and Josh Dallas share a fairytale romance, literally! The happy couple met on the set of ABC’s Once Upon a Time while portraying the characters of Snow White and Prince Charming. It didn’t take long for their on-screen romance to flourish off-screen as the two began creating their own happily ever after as husband and wife and now parents to their two children, Oliver and Hugo. Goodwin and Dallas have been working together on the show for the past six seasons, and soon the cute Hollywood couple will be celebrating their fourth wedding anniversary this April! In honor of this, here’s a look at 7 things you probably didn’t know about their relationship!

The Once Upon a Time costars began dating in the fall of 2011, but the public didn’t learn about their relationship until March 2012. When filming first started, Dallas was still married to his first wife, Lara Pulver, best known for her role in True Blood, so in the beginning, Goodwin and him were just friends. However, the long distance aspect of their relationship while he was away filming in Canada proved to be too much for their relationship so they separated and eventually divorced. Meanwhile, Goodwin was engaged to fellow actor, Chris Klein, but she broke off her engagement around the same time as Dallas’ divorce. The two started dating shortly afterwards.

It appears things happened fairly quickly for these two as their on-screen romance transferred from the set into their daily lives. It didn’t take long for Dallas to fall in love with his co-star. “It hit me like a blinding light. I thought, ‘I’m in trouble now,'” he said. In a separate interview, he called falling in love magical. “On and off screen it was magical. And I think, particularly the first season, [it] had that kind of quality to it, and it was really exciting to play that couple Snow White and Charming, that couple that has that pure love, that real pure love from the start.”

Ginnifer and Josh got engaged in October 2013 after dating for nearly two years. The couple got married in Los Angeles in April 2014. The ceremony was very small and intimate with only about 30 family and friends in attendance. “We wrapped production on Once Upon a Time two weeks [prior], and a couple days later I was wed in Venice, Calif. I married Prince Charming. We’re both southern, so I was literally barefoot and pregnant at our wedding. I was afraid I would fall over. I don’t know what I was thinking,” she joked.

While on Jimmy Kimmel Live, Goodwin shared a funny story from her wedding day when their wedding planner’s car was robbed and their ketubah, which is a Jewish wedding contract hand-made by artists, was stolen! A very pregnant Goodwin spent the morning calming down her wedding planner when something incredible happened. “By the time we get off the phone, I have messages from my reps who say two Jews were walking down the street in Hollywood, found a piece of paper in the middle of the street, read Hebrew, knew that the 13th of Nissan was like the 12th of April, and that it therefore might be important that we get this piece of paper back with my name of it, Googled who represents Ginnifer Goodwin, found my reps at home on a Saturday, and got us back our wedding ketubah,” she said. Talk about good luck!

Not long after they announced their engagement, the two also revealed they were already expanding their family and were pregnant with their first child. Their son Oliver Finlay Dallas was born in May 2014, a month after they tied the knot. In June 2016, they welcomed their second child, another son named Hugo Wilson Dallas.

Goodwin told Jimmy Kimmel that she and Dallas had a very DIY parenting style with their first child. They didn’t use a nanny because “We thought, ‘That’s too L.A. for us,’ so we went real hippy-dippy,” she said. Now that the working actors have two children, they’ve succumbed to the L.A. parenting style and hired a nanny. “This time we’re going at it Downton Abbey-style–staffing up–like a nanny and an under-nanny,” she said. Goodwin also revealed Dallas even helped deliver their first child! “He worked it out with a legitimate physician that he would be at Cedars. The hospital didn’t know. He just stepped aside and was like, ‘And now Josh…’ Most women don’t let their husbands south of the headboard, right? But he still makes babies with me, so…” she joked.

While walking the red carpet together at the 2017 Oscars, Access Hollywood asked how Ginnifer and Josh make it work mixing their professional and personal lives together because many couples can’t make it work. Their explanation was basically that they are best friends and have a mutual respect. “We’re besties. I think there’s a mutual respect. Certainly, I respect her talent as an actress and to be able to work with that everyday is a dream come and then to be able to go home with my best friend is also the best!” he said. “I think we probably annoy people because we get along better than other people on sets in general,” Ginnifer added.