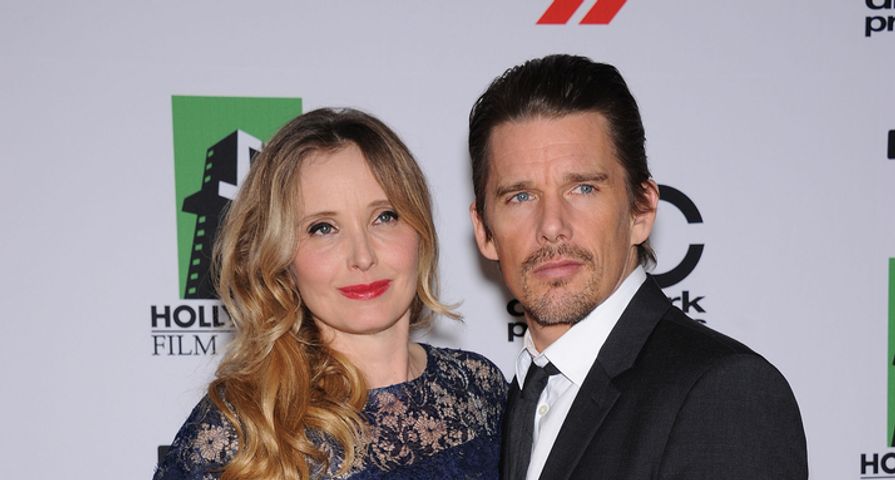 Off-screen Kate Winslet and Leonardo DiCaprio are good friends who have never been interested in each other romantically, which is surprising if you have watched them in “Titanic!” Their relationship on-screen is extraordinarily passionate, but it is all acting in spite of rumors floating around suggesting that there is something off-screen as well.

Jake Gyllenhaal and Heath Ledger in “Brokeback Mountain” had great emotional chemistry. The relationship between Gyllenhaal and Ledger was so convincing that it was shocking to learn that Ledger was in fact dating Michelle Williams – who happened to play his wife in the film. We suppose that Ledger and Williams’ chemistry off-screen didn’t interfere with the lack of chemistry they were supposed to demonstrate on-screen!

15. Angelina Jolie and Brad Pitt from “Mr. and Mrs. Smith”

The sexual chemistry between Leonardo DiCaprio and Claire Danes in “Romeo & Juliet” is palpable and quite convincing. DiCaprio and Danes were rumoured to have dated after filming which, given the amount of chemistry they exuded on set, isn’t surprising! Unfortunately, like all great things, Romeo and Juliet died and DiCaprio and Danes broke up!

13. Cary Elwes and Robin Wright from “The Princess Bride”

There is a reason that “The Princess Bride” is considered one of the greatest stories brought onto film – and we think it is the chemistry between Cary Elwes and Robin Wright! Apparently the on-screen chemistry was off-screen as well! Wright admitted that she asked for more kissing scenes with Elwes! No wonder these two exuded such passion throughout the film!

12. Andrew Garfield and Emma Stone from “The Amazing Spider-Man” Franchise

According to Andrew Garfield, when it comes to chemistry between actors and actresses, it is either there or it isn’t! Garfield’s on-screen chemistry with Emma Stone is definitely there in “The Amazing Spider-Man.” The chemistry with these two is actually off-screen as well. Garfield and Stone have been dating since 2011!

Bradley Cooper and Jennifer Lawrence had overwhelming chemistry in “Silver Lining’s Playbook.” During filming, their chemistry was so obvious that rumors began to swirl about these two hooking up off set! Cooper shut these down pretty quickly, but that didn’t stop people from hoping!

10. Alyson Hannigan and Jason Segel from “How I Met Your Mother”

Alyson Hannigan and Jason Segel play a married couple on “How I Met Your Mother” and their perfect chemistry on-screen makes them one of primetime’s most entertaining couples! But don’t expect this on-screen romance to translate off-screen. Hannigan is happily married Alexis Denisof, her co-star from “Buffy the Vampire Slayer.”

Back when “Friends” was on the air, everyone was cheering for Ross (David Schwimmer) and Rachel (Jennifer Aniston). The on-screen couple’s chemistry was sharp and, for 10 years, we all wanted these two to end up together! With Schwimmer and Aniston’s chemistry on-screen, it is sad to hear that the two might not be friends anymore off-screen!

Julie Bowen and Ty Burrell play a married couple on “Modern Family” and their chemistry looks effortless! According to Burrell, both he and Bowen got lucky. “Julie and I got really lucky that we like each other. I love working with her. It’s not completely effortless, but from the beginning Julie has been an easy person to work with, and that’s an everyday thing, so it does become like a version of a marriage.” Duly noted, Burrell!

7. Rachel McAdams and Ryan Gosling from “The Notebook”

Rachel McAdams and Ryan Gosling were great together in “The Notebook.” In fact, McAdams was given the part of Allie because of her chemistry with Gosling. These two went on to date off and on for a few years after the film’s release. According to Gosling, the relationship between him and McAdams was even more romantic than that of the characters in the film itself!

The chemistry between Eric Stonestreet and Jesse Tyler Ferguson  on “Modern Family” has been so convincing that the two have become role models for gay couples worldwide! From interviews, it is obvious that Stonestreet and Fergusion have a real rapport and have a lot of fun with the story lines. Although they play a gay couple on the show, Stonestreet is actually heterosexual while Ferguson is openly gay.

On “Gossip Girl,” no couple compared to Blair Waldorf and Chuck Bass! Leighton Meester and Ed Westick had incredible chemistry together. Whether they were plotting together, making out or just casually walking by one another at school, the energy between the two of them was electric. Thankfully Blair and Chuck ended up together on the show. We don’t think either one of them would have been happier with anyone else!

4. Ethan Hawke and Julie Delpy from “Before Sunrise,” “Before Sunset” and “Before Midnight”

Jesse (Ethan Hawke) and Celine (Julie Delpy) have amazing chemistry in “Before Sunset,” “Before Sunrise” and “Before Midnight.” Although the relationship between the characters changes in each film, their chemistry doesn’t slip at all. As strangers, former lovers and as husband and wife, Hawke and Delpy are perfect together!

3. Adam Brody and Rachel Bilson from “The O.C.”

Adam Brody and Rachel Bilson were adorable as high school sweethearts in “The O.C.” No one was surprised when these two started dating in real life – their chemistry on-screen was way too convincing. Although the couple broke up before the series was through, Brody and Bilson’s chemistry dominated the fourth season.

2. Kate Hudson and Matthew McConaughey from “How to Lose a Guy in 10 Days”

When it comes to on-screen chemistry, it is really hard to beat Kate Hudson and Matthew McConaughey in “How to Lose a Guy in 10 Days.” The chemistry between the two of them was undeniable and it would be really easy to imagine these two in an actual relationship. In fact, rumors that these two have actually hooked up have been floating around for years…

1. Brad Pitt and George Clooney from the “Ocean’s” Trilogy

Brad Pitt and George Clooney play devoted crime partners in “Ocean’s Eleven” and, even though their relationship is not romantic in the traditional sense, these two share quite the bromance! Pitt and Clooney have amazing chemistry with their witty banter that livens up any scene. This chemistry translates off-screen too – these two are actually really good friends!