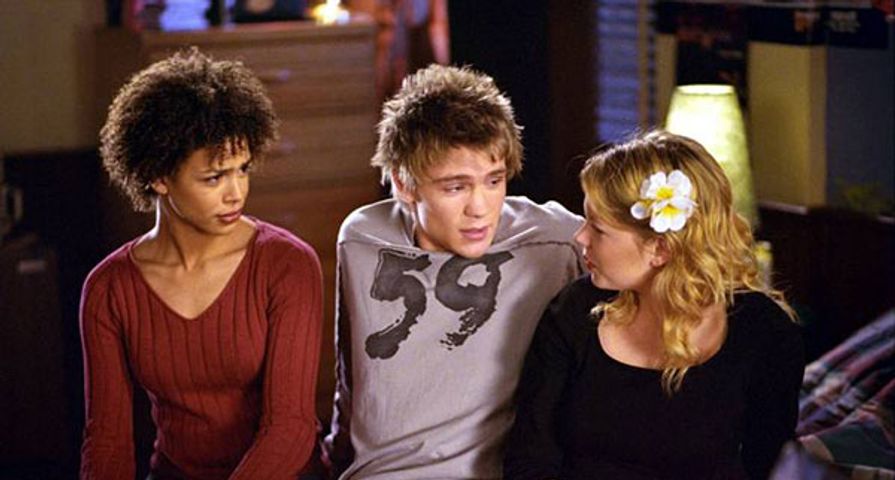 Dawson’s Creek was a popular teen drama series about a close knit group of friends living in the fictional small town of Capeside, Massachusetts. The six season show was hugely successful during its time on air from 1998 to 2003 and acted as a platform for rising stars like James Van Der Beek, Katie Holmes, Joshua Jackson and Michelle Williams. Similar to many other teen dramas, Dawson’s Creek had a lot of great guest stars, many of whom have gone on to become pretty big stars! Here’s a list of 15 celebrities you forgot guest starred on Dawson’s Creek!

Before he became a well known Hollywood actor best recognized for his hugely successful roles in films like Knocked Up, 40-Year-Old Virgin and Neighbors, Seth Rogen made a one episode appearance on Dawson’s Creek back in 2003 as Bob. He played a stoner friend who hooked up with Joey’s roommate, Audrey, in college before she heads off to rehab in the episode titled “Rock Bottom.”

Superstar Gwen Stefani and her band No Doubt got some great free advertising when they appeared on Dawson’s Creek back in 2002. The celeb appeared as herself in season 6 and performed alongside her band when the group of friends went to a No Doubt concert. At the time, No Doubt was promoting their 2001 album, Rock Steady.

Scott Foley has been on many incredible shows throughout his career like Scandal, Grey’s Anatomy, True Blood, Felicity and even Dawson’s Creek! He had a five episode arc as Cliff Elliot, a nice guy jock who becomes a love interest for Jen in season 1. The two didn’t last long, especially after he pranked Jen based on Dawson’s advice which was completely misleading. Later that year he went on to play Noel Crane on Felicity.

It feels like Jane Lynch has played some kind of guest role in pretty much every notable television series and Dawson’s Creek is one of them! The comedic actress appeared in season 4 of Dawson’s Creek to play Mrs. Witter, Pacey’s overbearing mother.

Before he got his big break on the teen drama One Tree Hill, this teen heartthrob was guest starring on shows like Gilmore Girls and Dawson’s Creek! He played the role of Charlie Todd, a musician who had a bad reputation for being a womanizer. He dated Jen in season 5, but it was later discovered that he was cheating on her with a girl named Nora, who he’d been dating at the same time. He also dates Joey for a brief period of time and develops genuine feelings for her.

Julie Bowen is now widely known for her role on Modern Family as Claire Dunphy, but nearly a decade prior she appeared on Dawson’s Creek in season 3 as Dawson’s Aunt Gwen. She only stuck around for one episode since she lived outside of Capeside, but she invited Joey, Pacey and Andie to spend spring break at her Vermont home.

This by far is the most surprising and random guest star on Dawson’s Creek, but a star nonetheless! Jack Osbourne appeared as himself in three episodes of season 6 as he hung out with Joey and Audrey at Worthington University. His connection to the girls was that he grew up next door to Audrey’s family in Los Angeles.

Bianca Lawson had a four episode arc on Dawson’s Creek between 1999 and 2000 as Nikki Green. She met Dawson at a film festival and Cambridge and the two bond over their shared interest in becoming a director, as well as their background as children of divorce. Dawson finds her and her work inspiring.

Today he stars on his own show, Supernatural, as Dean Winchester, but before he got that long-term gig he guest starred on Dawson’s Creek as C.J. He had a recurring role that lasted for an impressive 12 episodes in season 6. He is introduced as a love interest for Jen after the two meet in college. Although he hooks up with Jen’s roommate Audrey, he and Jen end up dating afterwards.

Oliver Hudson was one of Joey’s main love interests on Dawson’s Creek. The two had a pretty special relationship and many people wished these two ended up together in the end. He played her on-again-off-again boyfriend, a bartender named Eddie Doling, in season 6. Hudson appeared in 16 episodes until he left to star on his own WB show The Mountain which only lasted for one season.

In the same year she starred in the film She’s All That, Rachael Leigh Cook had a three-episode arc in Dawson’s Creek as a girl named Devon. She met Dawson after she posed naked in Joey’s art class and Dawson later cast her in his autobiographical movie to play Joey.

Now he’s 26-years-old, but back when he appeared on Dawson’s Creek, he was only 9! He played the character of Buzz Thompson for three episodes, a troubled kid Pacey mentors through a big-brother program. Thompson’s mother signed him up after his father left their family. He’s gone through numerous mentors until he finally meets Pacey and the two share a special bond.

Before she became forensic scientist Abby Sciuto on NCIS, she played the role of Rachel Weir on Dawson’s Creek back in 2001 during season 5. She’d be unrecognizable to her fans today as the blonde haired, glasses-wearing therapist.

Right after she finished her stint on Freaks and Geeks, Busy Phillips moved onto Dawson’s Creek as Audrey Liddell, Joey’s roommate in college. She held the role for an impressive 39 episodes between 2001 and 2003.

He’s now known for his Emmy winning role on HBO’s Veep, but back in the day he was doing guest appearances on shows like Dawson’s Creek. He appeared in one episode as Doctor Bronin, a doctor who tells Dawson he has to make the life changing decision about whether or not to take Mr. Brooks off life support.