Dawson’s Creek: Behind The Scenes Secrets 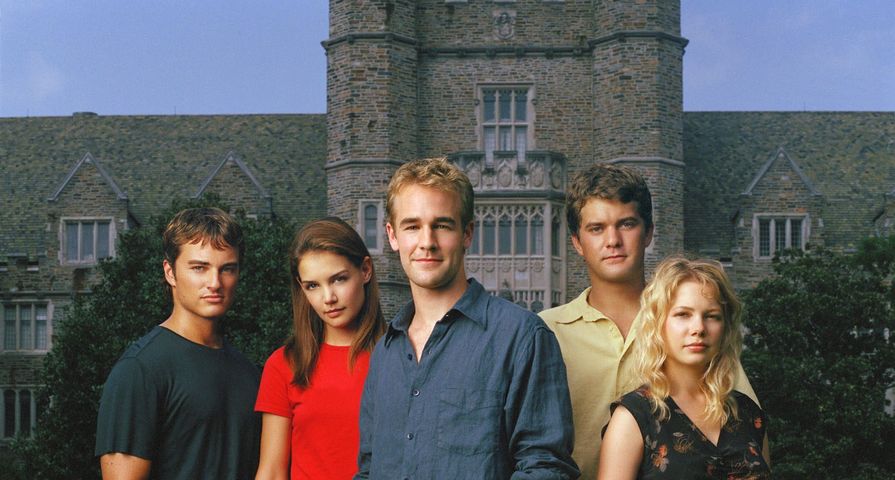 It’s almost been 20 years since the teen drama Dawson’s Creek first premiered on The WB and over 10 years since it went off the air. The show – which catapulted James Van Der Beek, Katie Holmes, Joshua Jackson and Michelle Williams to stardom – has become a TV classic and for some a defining show for their teen years. For all of you Dawson’s Creek fans, we have some behind the scenes secrets about the show, many of which will totally surprise you!

10. The Fox Network Bought It

The show was originally sold to Fox, but the network dumped it because it wasn’t having any luck with Party of Five. “I was told they were struggling with Party of Five and they didn’t need another one,” creator Kevin Williamson said. It took another two years and then The WB picked up the pilot.

9. Joey and Pacey’s Relationship Was Planned

Kevin Williamson always knew that a romantic relationship between Joey and Pacey was in the cards after he saw the dailies from the season one episode “Double Date.” “You saw the chemistry and it opened up and then we just put a lid on it,” Williamson said.

8. Joey Almost Ended Up with Dawson

Initially, Kevin Williamson wanted Joey and Dawson to end up together in the finale, but halfway through writing it, he changed his mind. “Dawson seemed like the obvious answer and once I got into writing the first hour. … This isn’t what the show set up to be. Maybe that’s where it started but it evolved and it ended up as something else. I wanted it to be a twist on the teen genre but also wanted it to be surprising, honest and real and say something about soul mates and what soul mates can be. That’s why we did it that way,” he said.

7. Why Jen Was Killed Off

Kevin Williamson believed that one of the core characters had to die in the finale to make Dawson’s Creek a true coming of age story. “They had dealt with every issue under the sun… but they hadn’t dealt with the death of someone in their circle. Until you deal with death, that’s one more way of coming of age. I wanted to see what that would look like,” he told Entertainment Weekly. Williamson decided that Jen would be the one to die because she had always been the outsider and misfit, and she could be the catalyst for Joey finally choosing between Dawson and Pacey.

Producers initially wanted Alanis Morisette’s song “One Hand in My Pocket” as the show’s theme song. “That Alanis Morissette song was so ingrained in all of our heads that the thought of putting in another piece of music was just inconceivable,” executive producer Paul Stupin said. They never acquired the rights to the song though because The WB told them that it would be too expensive to do so. Producers then commissioned Jann Arden to create a theme song for the show called “Run Like Man.” Before the show premiered, however, The WB released a series of promos with pop songs, one of them being Paula Cole’s “I Don’t Want to Wait.” Kevin Williamson and Stupin were asked if they ever considered using that song for the show’s opening. Although they hadn’t considered it, they decided that it was another option worth considering, and ultimately decided that it was perfect, so the network made a deal with Cole.

5. Jack Was Always Going To Be Gay

4. Pacey Becoming a Stockbroker Was a Mistake

No one really enjoyed the season six storyline where Pacey became a stockbroker and the writers have since expressed deep regret over this. “I have deep regrets about [this],” Anna Fricke said. “We were really into that movie Boiler Room. The feeling was Pacey wouldn’t go to college … and it felt so right for his character in terms of being so incredibly intelligent, but not bookish.”

The show’s penultimate episode, “Joey Potter and Capeside Redemption,” was supposed to be the show’s finale, but the network and the show’s writers wanted to get Kevin Williamson (who had left after season two) to come back to write a two-hour series finale and tie up all of the loose ends. To give him the freedom to do that, the writers suggested that the characters jump ahead five years.

The Dawson’s Creek writers adored Meredith Monroe (who played Andie) and wanted to keep her character around after her relationship with Pacey ended, which is why they made her struggles with mental illness a storyline. Julie Plec, Kevin Williamson’s longtime friend and collaborator, asked for an Andie and Pacey scene in the show’s finale, but the scene ended up on the cutting room floor (but it’s on the DVD).

Executive producer Paul Stupin is the one who came up with the idea for Pacey. “He felt that Joey and Dawson needed a Jim Belushi-like friend. “Kevin had such a great vision of Dawson and Joey and that relationship and world … was amazing,” Stupin said. “And as we sat and talked more it seemed like Dawson should have another friend. We should have three of them. Out of our conversation … we started talking about a Jim Belushi character. Out of that came Pacey.”