Celebrities Who Are Childhood Friends 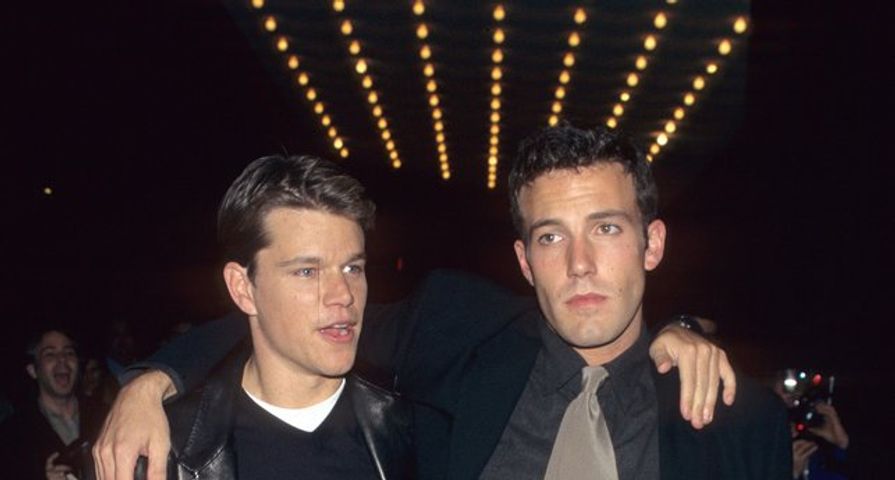 Hollywood is a very small community — this is why many stars end up dating one another or become star-studded BFFs. While some of these friendships are formed after working together and mingling in the same group of friends, there are a few that pre-date fame and fortune and go all the way back to their childhood! Here’s a list of 15 celebrities you probably didn’t know are childhood friends!

Most of the celebrities on this list know each other from their days at school together, but Ryan Gosling and Justin Timberlake crossed paths as co-workers! They were both apart of the Mickey Mouse Club as kids and became fast friends who hung out in between shoots and even lived together at one point when Gosling’s mother moved back to Canada. In an interview with The Jonathan Ross Show in 2013, Timberlake said he and Gosling were partners in crime: “We were crazy. We, like, skipped tutoring. Going to the park, to the Honey I Shrunk the Kids set. We’d have milkshakes. Oh man, we were so gangster.”

Australian actresses Nicole Kidman and Naomi Watts became fast friends after they met at an audition for an Australian bikini ad. “We had to sit and wait, both in swimsuits, feeling incredibly embarrassed. And neither of us got the job!” joked Watts in an interview with People. Their friendship blossomed when they starred in the 1990 film Flirting. Kidman’s career took off much faster than Watts, but she didn’t leave her friend behind! “She kept saying, ‘It’s just going to take one thing if you’re in a hit film [then] everything changes,'” said Watts, quoting her old friend.

These two have one of the most well known childhood friendships that goes way back! They first met in the late ’80s when they both auditioned for the same role. In the ’90s they collaborated on the film Don’s Plum and became members of a young pack of actors who were notorious for their romantic lives. “We were these young, very enthusiastic, ambitious young men that really wanted to get our foot in the door,” said DiCaprio in an interview with the Associated Press. Their friendship has continued on into adulthood. “Every project we do, we talk about. Every single choice I’ve made, I’ve talked to Tobey about and vice versa. We’ve had endless conversations about certain projects and argued with one another and supported one another along the way.”

Many of us know them as co-stars on the reality series The Simple Life, but their friendship goes way beyond that. They grew up in the same neighborhood in Bel-Air. In 2014, in an episode of Watch What Happens Live, Richie explained how her friendship with Hilton works: “Paris is somebody that’s been in my life since day one. I haven’t spoken to her in a while technically, but, if you really want to get into it, my view of a friendship is someone that you don’t necessarily have to talk to every day.”

Elijah Wood and Macaulay Culkin met when they both starred in the 1993 thriller The Good Son. They became fast friends during their long days on set and even got tutoring together! These two are still close friends to this day.

Singer and songwriter Lauryn Hill became friends with actor Zach Braff while they attended Columbia High School in Maplewood, N.J. In an interview with Jane magazine in 2006, Braff revealed Lauryn Hill attended his bar mitzvah! “There was a game called Coke and Pepsi. You’d have a partner, and one person was coke and the other Pepsi. Depending on what the DJ would yell, you had to run and get on that person’s lap. And Lauryn was my Coke and Pepsi partner,” he said.

The Office co-stars John Krasinski and B.J. Novak have known each other since their days in Little League and at Newton South High School in Massachusetts. They parted ways after high school, but then were brought back together during the final auditions for The Office! During an appearance on The Ellen DeGeneres Show, Novak said he and Krasinski have known each other their whole lives. “We showed up at the final audition, call back for The Office and there he is for Jim and I’m there for Ryan. It’s so bizarre that sometimes I think if I ever woke up and the whole Office had just been a dream, I’d be like ‘I should have known, like, you know who played Jim? John from high school.’ It’s that weird,” he said.

Girls co-stars Jemima Kirke and Lena Dunham didn’t have to do much research for their on-screen role together because they’re actually off-screen buddies! Kirke’s character, Jessa Johansson, suited her so well because she was developed by Dunham to portray her real-life best friend. They met as students at St. Ann’s School in New York City and went on to work together, first in Dunham’s indie film Tiny Furniture and later on Girls. To prove just how close they are — Dunham let Kirke tattoo a bulldog on her ribcage!

This friendship blossomed out of another generation’s friendship — their dads! According to Jonah Hill, he’s known Adam Levine since they were born because their dads were best friends. “Our dads met at the principal’s office in junior high. We basically lived together — we were in carpool, sleepovers at each other’s houses, everything,” said Hill in an interview with Howard Stern. A true friend and loyal fan, Hill’s first concert was to see Kara’s Flowers, the original band that eventually formed Maroon 5. Hill also said Levine hasn’t changed a bit since he got famous. “That is a guy who is exactly who he ever was, in a great way.” These two are so close, Hill officiated Levine’s wedding to Behati Prinsloo.

These two pop stars have known each other since they were little girls appearing on the show Barney & Friends. Selena Gomez and Demi Lovato were both so young at the time, they probably don’t even remember it! They both went on to star on other shows and later reunited for the television film Princess Protection Program. Even though they might not see each other much now that they both have hugely successful careers and are into their twenties, they both support each other and have grown quite close!

Coincidentally two of Hollywood’s hottest actors are not only best friends, but childhood friends! They’re both from Cambridge, Massachusetts, and first met in the early ’80s when Matt Damon and his family moved in down the street from Ben Affleck, who was 8-years-old at the time. By the time they were in high school, they were inseparable. “Before Matt, I was by myself. Acting was a solo activity where I’d just go off and do something, act in a little TV show or something, and no one understood it. All of a sudden I had this friend Matt, and he gets it and wants to do it and thinks it’s interesting and wants to talk about it,” said Affleck in an interview with People. They went their separate ways in college, but reunited in the early ’90s when they both moved to L.A. to try and make it as actors. Not long after they wrote the film Good Will Hunting!

Gwyneth Paltrow and Maya Rudolph fathers Bruce Paltrow and Dick Rudolph were longtime friends from Tulane University. After they graduated, they followed similar paths to L.A. with careers in Hollywood. Following suit with everything else, they both had daughters who eventually became friends after attending St. Augustine by the Sea School in Santa Monica. Paltrow and Rudolph were reunited in 2001 for an episode of Saturday Night Live when Paltrow was asked to host not long after Rudolph joined the cast. During her monologue she took the time to congratulate her friend: “This week has been real extra-special to me because one of my best friends is on the show now, and I’m so proud of her. She’s super-funny and talented, and I’m so glad she’s in the cast.”

Australian actresses Phoebe Tonkin and Claire Holt are known for their roles on The Vampire Diaries and The Originals, but their off-screen friendship predates these roles by a mile! They first worked together as kids back in 2006 on the set of H20: Just Add Water, an Australian series about mermaids. After 12 years of friendship, they reunited on the CW Network and even moved in next door to one another in L.A. It’s clear from both of their social media pages that they remain close friends!

These two unlikely friends met while attending LaGuardia’s High School of Performing Arts in New York together. Back then Chaz Bono, the son of Sonny and Cher Bono, was a young girl named Chasity. Back then Chaz was popular for having one of the nicest houses out of all his peers because, well, his parents were Sonny and Cher! Jennifer Aniston told Allure they used to go back to his house to hangout after school. “Everyday a group of us would go to Chaz’s house after school. I haven’t spoken to him in a while.”

The daughters of Goldie Hawn and Areosmith’s Steven Tyler, Kate Hudson and Liv Tyler, met at Crossroads School for Arts & Sciences in the early ’90s — the same school where Gwyneth Paltrow and Maya Rudolph first met. Their friendship was forced to get much closer when they both teamed up to play lovers in Robert Altman’s film Dr. T & the Women in 2000. “We were always so shy about the kissing, but in retrospect we were like, ‘We should have just totally made out and tonged each other.’ But we never did, we were just too scared to do it,” said Tyler.