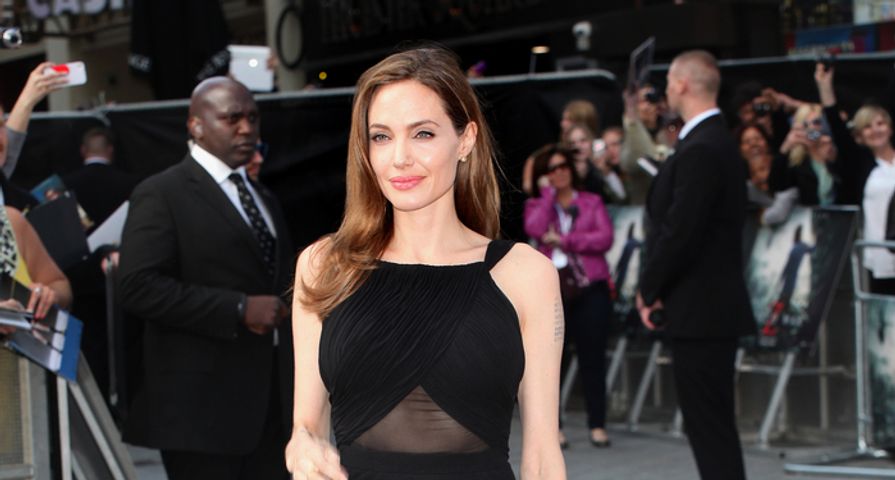 Angelina Jolie Voight, more commonly known as Angelina Jolie, is an A-list actress and director, who more recently is better known for her worldwide humanitarian efforts. As one of the world’s highest paid actresses, Jolie has been incredibly successful and involved in some big projects like the Tomb Raider franchise and Girl, Interrupted. She’s won numerous awards including one Oscar, 3 Golden Globe Awards and 2 Screen Actors Guild Awards. Her high-profile marriage to Brad Pitt has kept her under a bright spotlight and she’s also been followed closely for her extensive work as a philanthropist. As a child who grew up in Hollywood with famous parents, not much is unknown about Angelina Jolie, but we found a 12 things that most people don’t know about gorgeous actress turned humanitarian:

Angelina Jolie was born on June 4, 1975 to actor Jon Voight and actress Marcheline Bertrand. She has one sibling, a brother named James Haven. Her parents separated in 1976 and both she and her brother lived with their mother full time. Surprisingly, Jolie didn’t grow up wanting to be an actress. At one point she dropped out of acting school to pursue a career as a funeral director. She didn’t return to acting until she had her first major break up at the age of 16. The break-up affected her deeply because she was living with the boyfriend at the time under her mother’s roof. Jolie then grew up to have an extremely strained relationship with her father because of his infidelity. She legally dropped the name “Voight” in 2002, but in 2007, after her mother’s death, they finally reconciled.

Unlike most actors/actresses, Jolie loves doing her own stunts, which is totally badass. One of her most famous roles to date is as Lara Croft in Tomb Raider. While making those films she performed nearly 80 percent of her stunts. During the making of Lara Croft: Tomb Raider, the production team had to come up with a special gun that could be easily reloaded by a left-handed Jolie.

Jolie married her Hackers co-star Jonny Lee Miller in 1995. At their wedding she wore black leather pants and a white top with Jonny’s name scribbled in blood. Their marriage didn’t last long as they divorced four years later in 1999. Before their divorce was finalized she had her first openly gay relationship with her Foxfire co-star Jenny Shimizu in 1998. She then hopped right back into another marriage with Academy Award-winning actor Billy Bob Thornton. This marriage was unified in Las Vegas and the entire thing cost $189. They infamously wore each others blood in a vial around their necks. Her marriage to Thorton lasted until 2003. In 2004 she met Brad Pitt during the making of Mr. and Mrs. Smith. They were married in 2014, but Jolie filed for divorce in September 2016.

Angelina Jolie is the only A-list celebrity who doesn’t have a publicist to represent her and her public activities. She deals with her own public image which is probably why she is so fiercely private.

One of the most unique characteristics about Angelina is her many tattoos. She has covered up several of her tattoos, but still has about 14 (that we know about), and each one has unique story. One of her first tattoos is on her left arm and was done in her mother’s presence. It is the phrase, “A prayer for the wild at heart kept in cages” inspired by Tennessee Williams. She also has a tattoo between her shoulder blade that reads “Know Your Rights,” a phrase from her favorite band, The Clash. In an interview with People, Jolie said the tattoo on her left shoulder was performed by a Thai artist using a hammer and “a foot-and-a-half long needle.” Another unique marking is a Latin proverb, “quod me nutrit me destruit,” which means, “What nourishes me destroys me,” and she has two sak yant designs featuring a prayer of protection and a twelve-inch-by-eight-inch tiger, as well as seven sets of geographical coordinates indicating the birthplaces of her children and Brad Pitt.

Jolie has grown up in the spotlight and those who have been following her career know she used to have a bit of a dark or rebellious side. She had very low self esteem and suffered from depression in the early ’90s. She began cutting herself and using drugs in order to cope. She told Allure magazine in 2004, “I had that problem early on when I couldn’t feel a bond with another human being.” She has stated in interviews that she grew up not wanting to be hugged. “Growing up, I had a thing about people hugging me, even my mother, I’m holding my breath now just talking about it.” Being a mother has definitely softened Jolie because she seems very loving and caring towards her children — we’re pretty sure she got over that whole hugging thing!

Angelina Jolie met Brad Pitt when he was still married to Jennifer Aniston. The two adamantly denied any rumors of an affair, but later admitted that they “fell in love” on set. Their relationship was extremely controversial because Jolie had spent many years feuding with her father over his infidelity with her mother. In 2005 she said, “To be intimate with a married man, when my own father cheated on my mother, is not something I could forgive. I could not look at myself in the morning if I did that. I wouldn’t be attracted to a man who would cheat on his wife.” Together she and Pitt have 6 children. Three of their children are biological; their first daughter Shiloh was born in Namibia to avoid paparazzi and then in 2008 Jolie gave birth to twins Knox Leon and Vivienne Marcheline in a hospital in Southern France. Jolie adopted a son from Cambodia named Maddox and a daughter Zahara and Brad later filed paper work to share adoptive rights with Jolie. Then together they adopted a third child from Vietnam named Pax Thien.

5. She’s Been in Music Videos

Angelina Jolie has always been recognized for her captivating beauty. She started modeling when she was only 16-years-old and soon after appeared in multiple music videos for huge bands like The Lemonheads, “It’s About Time” (1993), Lenny Kravitz’s “Stand By My Woman” (1991), Meat Loaf’s “Rock’N’Roll Dreams Come Through” in 1993 and later in 1997 as a stripper in The Rolling Stones video for the hit single, “Anybody Seen My Baby?”

The first pictures of her twins, Knox and Vivienne, were sold for $14 million! These celebrity babies were so famous their photographs were the most expensive celebrity baby pictures ever taken. The pictures were made public in People and Hello! magazines and the money was donated to the Jolie-Pitt Foundation.

It is well known that Angelina Jolie and her ex-husband Brad Pitt were extremely generous with their time and money. They created the Jolie-Pitt Foundation, which contributes to causes throughout the U.S., but also all around the globe. Most of the funding has gone to countries like Cambodia, Namibia and Ethiopia. Their household rule was spend 1/3 of what you earn, give away 1/3 of your earnings and save the remaining 1/3 for your family. She is also a former Goodwill Ambassador of UNHCR. She was awarded the “Citizen of the World Award” by the UN Correspondents Association in 2008. Jolie also received a “Global Humanitarian Award” by UNA-USA in 2005.

2. She has 3 Different Citizenships

We’re convinced Jolie can do it all. Not only is she a generous humanitarian, adoptive mother, stunt woman and one of the highest paid actresses in the world, but she’s also a pilot! Angelina Jolie has a Private Pilot Certificate with Airplane, Single Engine and Land rating. She practices her flying on her very own single-engine Cirrus SR22 aircraft. She will also be one of the few fortunate people to view earth from space by flying on Richard Branson’s Virgin Galactic.