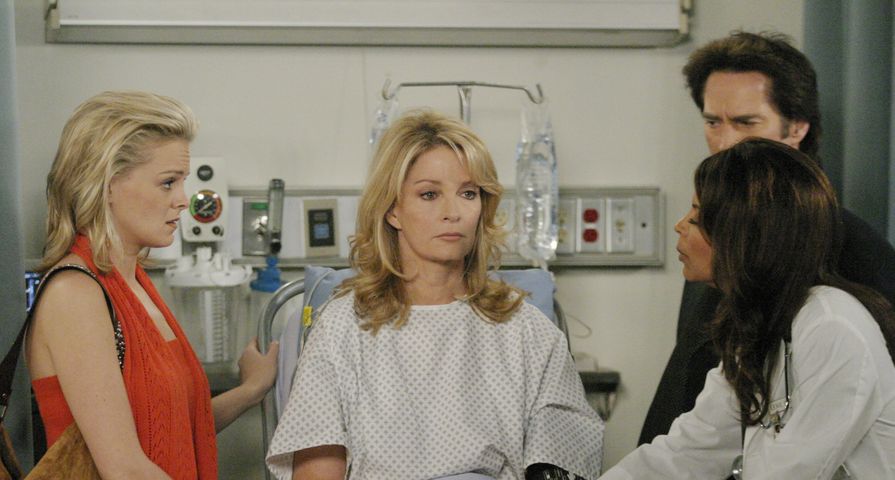 With some of the soap opera shows currently on the air for over five decades, daytime dramas have two major challenges, one being to create compelling content that will bring in new and younger viewers and another is to develop storylines that older fans haven’t seen before. This can be a struggle as long-time soap fans have seen it all before. Therefore, below are 12 soap opera storylines fans are totally sick of.

When General Hospital’s (GH) Luke and Laura got married in 1981, Helena Cassadine cursed the couple, launching a feud that lasted decades. A slew of Cassadines have died over the years only to return to Port Charles to continue the curse and rivalry with the Spencers, including Helena herself, her son Stavros, and now Valentin. With the entire Jason/Drew storyline moving forward, and Helena’s name mentioned on the show multiple times, fans can’t help but speculate if she’ll return from the dead? Many fans hope not simply because they are tired of the curse and rivalry and just want it to go away.

There are some Young and the Restless (Y&R) fans who love seeing Billy and Phyllis, Devon and Hilary, and Cane and Lily together; however, there are those who find these duos utterly annoying. While Cane and Lily’s reunion makes sense, some find it unrealistic how sappy these parents of teenagers have become. Others feel that Philly lack substance. When it comes to Hevon, many Y&R fans wish these two would go their separate ways and take a chance on love somewhere else cause Hilary is too unstable for Devon!

10. DOOL’s The Mystery Of John Black

Even as a senior and respected citizen of Salem for decades now, John Black continues to remain a bit of a mystery. Undoubtedly, Black is one of the most popular Days of Our Lives (DOOL) characters in history; however, his past is still something that is uncertain. The one things many fans hope for John in the future is that his past doesn’t creep back up to haunt him. It seems like whenever things lag in Salem, something pops up from Black’s past that he doesn’t remember. By now, it seems that John has dealt with every decade of his life before Salem and DOOL writers should just leave well enough alone and focus on other storylines for this pivotal Salem character.

Anyone else sad to see the Abbott family crumbling? Many Y&R viewers are devastated that Jack isn’t John’s son and at this rate, it seems like Tracy Abbott is the only child linked to John Abbott, biologically-speaking (but that could all change too). Paternity switch ups plague all soaps, from GH’s Franco once being considered a Quartermaine and Jason’s twin to him now being a Baldwin. Even the popping up of Stefan DiMera on Days raised a few eyebrows. While some of these ‘secrets’ that come out decades later are nicely linked to history, some that come out of the blue make everyone want to roll their eyes.

Speaking of, one of the reasons many Y&R fans are so upset with the Jack Abbott paternity storyline is that when you look at the Abbott family, a once prominent one in Genoa City, it’s now only dwindled down to four characters: Traci, Billy, and Billy’s kids, Katherine and Johnny. The Quartermaine mansion on GH used to be the center of the universe in Port Charles too, and thanks to deaths, character exits, and plot twits, the family is a lot smaller. Some GH fans also once viewed the Cassadines as an established family, but now that family only consists of Valentin, Charlotte, and Spencer.

While there are many who adore Franco Baldwin, there are some haters out there who feel like the character is being ‘pushed’ on audiences. GH writers continually place Franco in romantic storylines with popular female leads (i.e. Carly and Elizabeth) when many feel the chemistry is not there. They also tend to place Franco in situations where he doesn’t belong but ends up being the hero, like his recent discovery about the fact that those Niagra assets were signed over to Port Charles in the end.

Sonny, Paul, Chad, Gabi, Lani, Eli, and J.J. were stranded on an island last year. John and Bo landed on one and needed rescuing in 2010, and then there was Melaswen Island in 2004. It’s clear, DOOL is obsessed with jungles and islands, and every so often, writers will center a cheesy storyline around this. Days fans are just sick of them.

Most soap opera fans are familiar with the term soap opera rapid aging syndrome (SORAS) where a child character will go off to boarding school and three months later return as a teenager. While this is an annoying occurrence as it is, de-SORASing characters is even worse. This is when an older character is put in storylines that make them appear younger than they really are. Like the Y&R’s Phyllis hanging out Hilary, Marlena Evans getting pregnant in 2005 when she was technically in her late 50s, and even the coupling of Ava and Griffin are examples around how some older characters are kept young on soaps.

Anytime a woman within the child-bearing years has an affair, soap fans can see what will happen from a mile away. Yes, the ‘who’s your daddy’ storyline launches and while some of these can be interesting if there is a twist involved, some feel like the same old, same old. DOOL’s Abigail technically didn’t cheat on Chad with his brother Stefan (due to her mental health issues); however, fans can see a pregnancy/paternity storyline on the horizon for these three.

Speaking of, while GH has been able to nail mental health with stories that show a realistic (for soaps) view on bipolar disorder (i.e. Sonny and Morgan Corinthos), for the most part, when mental health is involved in a soap storyline, it’s way too over the top. Many DOOL fans will agree that actress Marci Miller is doing a phenomenal job with her current dissociative identity disorder (DID) storyline; however, the arc in itself is cheesy. Y&R’s Pattie Williams is entertaining when she shows up in Genoa City, but her mental health issues sometimes come off as exaggerated.

This storyline was intriguing when first done a few times on soaps years ago but now is simply too much. Two women in the same town end up pregnant and either one of two things end up happening (with the same baby switch result): either both babies are born and purposely or accidentally switched, or one mom loses her baby and moves on to pretend she’s pregnant, only to steal the other women’s baby or have some else do the stealing/switching. Said baby (or babies) live in a household with parents that aren’t really theirs for months … sometimes years! It’s a crazy storyline that has lost its shininess, and many GH fans are hoping there isn’t a baby switch on the horizon for Nelle, Maxie, or even Lucas and Brad’s baby-to-be.