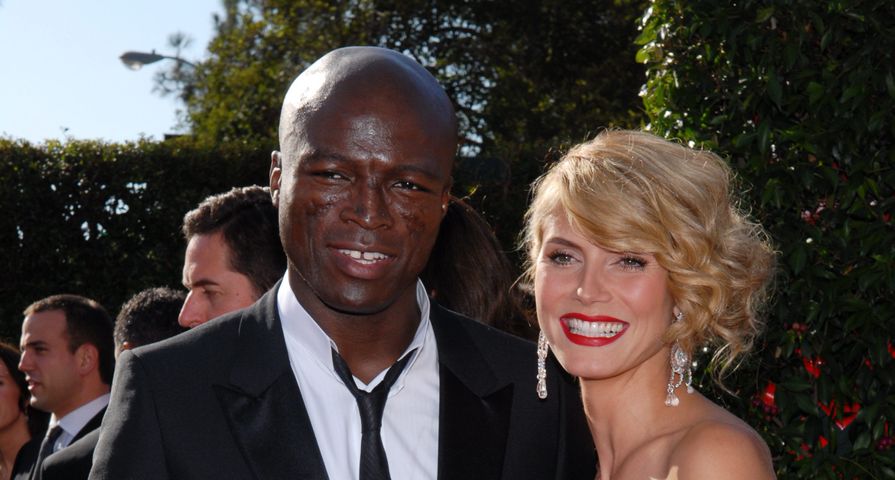 During their seven-year marriage, everyone was just a little jealous of Heidi Klum and Seal. They were always gushing about each other to the press and packing on the PDA when they were in public, so we all just assumed that they had the perfect marriage, but that wasn’t entirely true. It’s been several years now since they called it quits, so check out these 11 things that you didn’t know about their relationship:

Seal and Heidi first met in a hotel lobby in New York City in 2004 and she was immediately attracted to him. “I met him in a hotel lobby in New York City, and he came in just from the gym. I was sitting there and I was like, ‘Wow, he’s a very handsome man,’” she says. “I was physically, straightaway attracted to him, and then we got talking, and I was like, ‘Wow, he’s such a warm and charming man.’” According to her, he was wearing bicycle shorts she saw his entire package and was immediately impressed! He was equally impressed with her.  “I was taken aback when I met her. I thought she was one of the most beautiful women I’d seen. I thought: ‘Wow! Whoever goes out with that girl is one lucky guy!’” he told The Daily Mail.

Things You Didn't Know About Adam And Jackie Sandler's Relationship

10. Learning She Was Already Pregnant

About a month after they began dating, Klum told him that she was pregnant with an ex-boyfriend’s baby – but that didn’t change how he felt about her. It was when she was in the fifth month of her pregnancy that he realized that he wanted to marry her. “We hadn’t seen each other for about a month and a half, and I came to New York. She came to meet me at the hotel room, and this time when I saw her, she had this bump,” he told Oprah Winfrey. “I think it was at that point, when I saw her with a stomach, that’s when I knew. Of course we were in love before that, but that [was the] defining moment.”

The “Kissed by a Rose” singer proposed to her in 2005 in an igloo. “I proposed on Dec. 23 at 14,000 feet in Whistler, B.C., in uncharted terrain on a glacier, in a natural snow cave, in an igloo built just for the moment,” he told People. To get there, they had to take a helicopter, but once they were there, it was kind of like having their own little snow hotel. “He had an igloo built there, and they’d brought up everything: a bed with sheets inside the igloo, rose petals everywhere, candles. Very, very romantic!” she told Marie Claire. “There was food and champagne, and then the helicopter left. It was a little scary, too, because you’re so cut off from the world. No trees, nothing – it was hardcore. But I was ecstatic.”

The supermodel and the singer were married on a beach in Mexico in May 2005 near Seal’s home in Costa Careyes. Only 40 guests were present and she wore a lace Vera Wang gown with an empire waist because she was pregnant with their first child together. The cake that was served was topped with a miniature Seal in a tux and Klum in a gown.

6. He Made Her More Stylish

The former Victoria’s Secret model credited her then-husband with making her more her stylish! “I’ve gotten more stylish since I’ve been with my husband,” she told In Style. “I was always making fun of him because he has so many leather coats, jackets and shoes. But he looks hot. I want to look good for him. So I kind of stepped it up a bit.”

5. They Would Sing Together

Klum shared Seal’s passion for music. When they were married, they would sing together, but she wasn’t always on key. “We sing all the time,” she told In Style. “He’s always rolling his eyeballs because I’m in the wrong key. But I know he’s laughing about it too. So I’m not a singer – who cares? Not everyone is Seal!”

Things You Might Not Know About Tom Brady And Gisele's Relationship

During their seven-year marriage, Heidi and Seal renewed their vows every year that they were married. Every vow renewal ceremony had a theme. One year, the theme was white trash, another year it was retro-themed and for their last vow renewal ceremony, they had everyone dress in white and black as brides and grooms. Heidi had opened up to Redbook about her and Seal’s tradition. “It’s our time – a lovely family time,” she told the magazine. “It’s about remembering this moment of love we gave to each other and reinforcing it.” Years later, Seal revealed that the vow renewal was Heidi’s idea and that he wasn’t a huge fan of them! “It kind of turned into a little bit of a circus, which I wasn’t terribly fond of because, by default, I’m quite a private person,” he told Andy Cohen.

In January 2012, they announced that they were splitting after seven years of marriage. According to TMZ, the reason for the split which, according to them was a long time coming, was Seal’s temper and his inability to control it. It was reportedly starting to affect the children. Also, her booming career had created distance between them. In April of that year, she filed for divorce and was seeking primary custody with visitation rights for Seal. The divorce was finalized in October 2014. The couple didn’t have a prenup, but instead had a postnup, which kept much of their earnings separate, and they reached a confidential custody agreement.

After Seal and Klum separated, she began dating the family’s bodyguard, Martin Kristen. Seal didn’t take it so well and went to TMZ and slammed her. “I didn’t expect any better from [the bodyguard]…but I would’ve thought Heidi would [have] shown a bit more class…before deciding to fornicate with the help, as it were,” he said. Klum denied that she cheated and in response to his accusations, she said, “I cherish all of the great memories Seal and I created together over the years. Our separation was based on issues between the two of us. Seal has moved on and so have I. My priority has and continues to be protecting and providing for our children.”

Despite their divorce getting a little messy, the two are now on good terms. They were spotted in Aspen during Christmas 2016 skiing together with their four children, Leni (her child with Flavio Briatore who Seal legally adopted), Henry, Johan, and Lou. The couple would visit Aspen every year during the holiday season when they were married, and Klum continued to keep the tradition alive after their divorce, but without Seal.