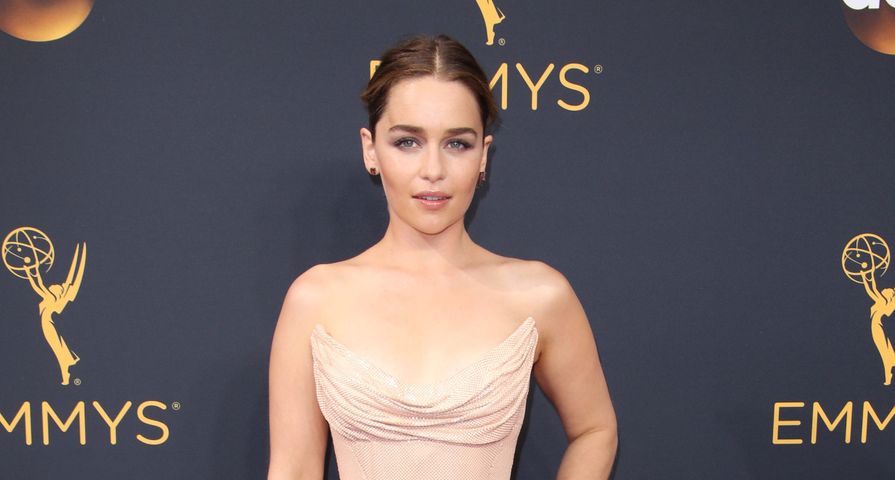 This English actress is best known for her role as Daenerys Targaryen in the HBO series Game of Thrones. Clarke hasn’t landed many roles in her career, but she’s definitely made her mark on Hollywood. She’s received three Emmy Award nominations for her performance on Game of Thrones over the past five years and in 2015 she was named Esquire’s Sexiest Woman Alive. She recently stepped away from her role as Mother of Dragons to try on a softer role in the new film Me Before You, but will be returning to HBO for the upcoming season. Emilia Clarke will be celebrating a milestone this month when she turns 30-years-old, so in celebration of that, here’s a look at 11 things you probably didn’t know about her!

Emilia Clarke was very young when she decided that acting was what she wanted to do. She went to see the musical Showboat with her mother when she was only 3-years-old and it inspired her to become an actress. She studied theater at the Drama Centre London. Even though she went to this great acting school, she was never the most talented girl in her class: “it was an uphill struggle. I never got cast as Juliet. There were some rarefied beauties in my year; they were blond, knew Shakespeare, had all the right things. With me, they’d be like, ‘Can you play the Jewish grandmother?’ ‘Uh-huh! Sure!'” Other celebrities who attended that school were Colin Firth and Pierce Brosnan. Surprisingly, she didn’t have that many acting jobs before she landed her role on the popular HBO show Game of Thrones. She had only booked two jobs, one on a soap opera and a television movie before she got the gig of a lifetime.

Clarke was working up to six different jobs when she finally got her big break as Daenerys Targaryen on Game of Thrones. She would take jobs wherever she could, anywhere from bartending to working in a call centre. One of the odds jobs that she took on was working as a telemarketer for charities. In an interview with Glamour, she described the experience: “[I would say] ‘Thank you for giving 5 pounds a month. Have you considered giving 6 pounds 60?’ Soul-destroying. People responded by saying things like, ‘You evil person. I’ve just lost someone close to me.’ I did four shifts and walked out,” said Clarke.

9. She Never Gets Recognized

Many celebrities wish they could have ambiguity from the characters they play on television, so Clarke is really lucky that she actually rarely ever gets recognized for her character on Game of Thrones. She said it’s the blonde wig that really throws people off because in reality she’s a brunette with much less hair. She even admitted that she sometimes likes wearing the blonde wig and has even begged the producers to let her go out with it on! “I keep asking to go out with the wig at night, but they insist there’s no way. They won’t let me go partying with it on! I would be killed on the spot…It’s silly to say, but when I take the wig off at the end of the day, I’m rather disappointed when I look in the mirror.”

In the first season of Game of Thrones, Emilia Clarke’s character, Daenerys Targaryen has to eat a horse’s heart as part of a pregnancy ritual for the Dothraki tribe that she married into. Obviously it wasn’t an actual horse’s heart, but Clarke said it definitely wasn’t tasty! When she was on Jimmy Kimmel’s talk show, Clarke said that what she was forced to eat was actually a bunch of really sticky red jelly. “They promised me that it would taste similar to a gummy bear and it definitely didn’t. The best way to describe it is sort of a congealed jam kind of thing.” They used a lot of fake blood to make it look real, but the ingredients they used to make the fake blood were really sticky. “The fake blood is really really sticky, so I was covered head to toe in the fake blood and I’m continually sticking myself to myself, or to other things. There was a moment when we were filming that I disappeared, and I was stuck to a toilet,” said Clarke.

Emilia Clarke has the same tattoo artist as none other than the Canadian rapper Drake! In an interview with Glamour it seemed she was happily surprised to learn this similarity! She divulged that she has a small tattoo on her pinky and what her next tattoo will be: “Amazing! He gave me a bumblebee [on my pinkie finger]. Up next is a dragon — obviously a metaphorical dragon, a single-line drawing or something. I’m not getting a cartoon dragon on my tits!”

6. She Used to get Bullied

It’s hard to imagine the beautiful actress being ridiculed for her appearance, but in an interview with Allure magazine, she said that she used to get teased as a kid for her eyebrows because she didn’t do any maintenance on them. “My mom had rules when I was growing up: Don’t do drugs, don’t have sex, and don’t touch your eyebrows. So I got bullied as a kid for having ridiculous eyebrows. She said, You’ll be thankful when you’re older,’ and I am. My mom used to tell me to brush them with Vaseline when I went to bed,” said Clarke.

In 2013 she played iconic Audrey Hepburn character, Holly Golightly in the Broadway adaptation of Breakfast at Tiffany’s in New York City. In an interview with Broadway.com, Emilia said that she’s always been drawn to musicals and that was what she saw herself doing instead of acting on-screen. Clarke said, “Music is something that’s always been a huge part of my life. When I was in my teens, I thought, ‘Would I like to try and work hard at being an actor, or do I want to work hard at doing something musical?’ Acting won out, but I do really enjoy those moments where I get to just belt something out.”

It’s become apparent in the last year that Clarke is a feminist, but what she’s advocating for isn’t in the typical arguments we see. Clarke has been extremely vocal about the fact that she thinks there should be a more male nudity on Game of Thrones. The actress has stripped it down for the camera on two separate occasions now and the show has become well known for it’s excessive display of nudity, particularly of women. Clarke has said numerous times that she has advocated that there needs to be more male nudity/ “There’s plenty of female nudity, myself included, and I feel like…I think we should get some equal male nudity and female nudity…Free the penis,” she said on the Conan O’Brien show. In the past year she started a movement which she called #FreeTheP. On The Late Late Show she said: “I feel like there’s a little bit of inequality between the amount of nudity that happens with women — this woman, in particular — and that happens with the other guys. I just think that should be even.”

Emilia Clarke dated the Family Guy creator for about six months in 2013. There was an almost 15 year age gap between the two celebs. The reason behind their break up was because of the physical distance between the two — she was filming in Europe and he was in California. They remain really good friends. Prior to breaking up, MacFarlane had told Entertainment Weekly that she was an “incredibly kind, supremely talented person and one of the hardest-working people I have ever met.”

During her audition, she fulfilled all of the appropriate requirements to win the role as Mother of Dragons, but she also added in a little dance for show runners David Benioff and D.B. Weiss and many HBO executives. When she was on the Jimmy Fallon show, she told him that during the audition they had finished all the required lines and acting and she asked them if there was anything else she could do for them and Benioff suggested she do a dance! Clarke said she then broke into a rendition of the funky chicken which turned into a robot dance. “I heard laughter going on and I thought, ‘Comedy gold!'”

1. One Thing She Doesn’t Do

Being famous can be a hard thing to deal with and most celebrities don’t really enjoy the ‘fame’ part of their job. The only way to survive all the media attention and online scrutiny is to avoid it, which is exactly what Emilia Clarke does. She told USA Today that when she became “famous” she came up with one solid rule for herself which was to stay away from ‘googling’ herself. “I have a rule: I just don’t Google myself. I’m on social media, but I don’t look at the stuff that other people tag me in because it just (messes) me up. Like, ‘Oh, I’m hideous and fat,’ but then if I don’t read it, you save yourself from finding any haters out there. If you hate me, I don’t need to know,” she said.