Home » Entertainment » Celebrities » Things You Might Not Know About Tim McGraw 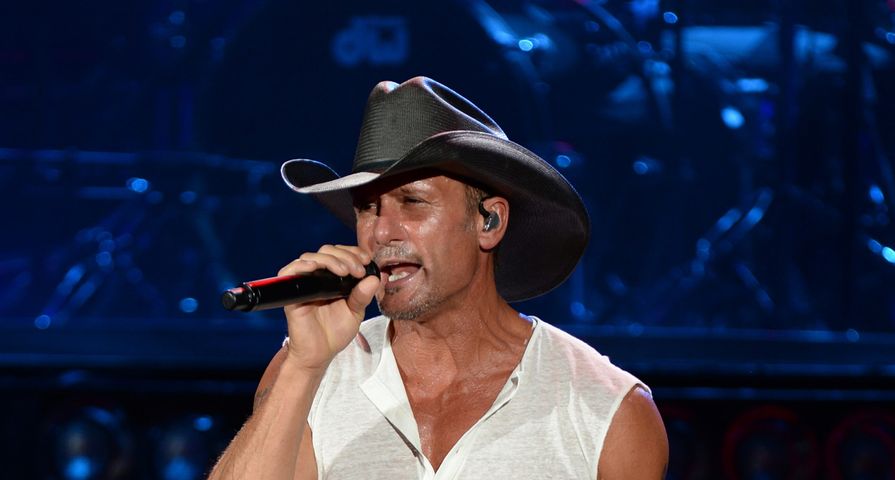 Tim McGraw is easily one of the biggest country music stars in the industry. He’s been topping the charts since the mid ’90s and shows no signs of slowing down! In addition to being unbelievably good looking, this country crooner is well known for his amazing voice, captivating stage presence, songwriting and even his acting. Tim has been branching outside his singing career with roles in big feature films like The Blind Side, Friday Night Lights, The Kingdom, Four Christmases, Flicka and Country Strong! Not only that, but he’s also married to mega-singer Faith Hill, making these two the hottest country couple. There’s so much to love about Tim McGraw which is probably why he has such a huge fan following. He’s been on the scene for quite some time, but here are a few things even his most loyal fans might not know about him!

Best buddies, McGraw and Chesney were arrested after causing a bit of a ruckus while headlining a music festival near Buffalo. Back in the summer of 2000, the two friends wound up in jail and charged with assaulting a sheriff’s deputy. They spent four hours in jail before being released on bail. According to news reports at the time, Chesney asked the daughter of the sheriff’s deputy if he could ride his horse and then instead of waiting for an answer, grabbed the horse and rode off ignoring orders to stop. Apparently, two officers tried to demount Chesney from the horse which is when McGraw and his manager got involved leading to a minor scuffle. The three of them were arrested, arraigned, and released on bail. The three men had to wait an entire year before they got their day in court. But it was worth the wait because the charges were ultimately dropped and after the verdict was read, Chesney, Faith Hill, and McGraw hung around to sign autographs for fans.

Tim has revealed that he has strict social media rules in his house, and although he hasn’t divulged the details of what these “rules” are, we do know that his daughters aren’t allowed to have Twitter accounts. Also, Tim himself doesn’t operate his Twitter account (aside from a few tweets here and there). He does have a page, but it’s fully run by his management team. His excuse for not operating his own social media isn’t to monitor usage and protection like it is for his daughters, his reasoning is most likely due to the fact that he isn’t very tech savvy! In an interview with Taste of Country, he admitted he’s still in the learning stages when it comes to Twitter. He said, “I’m getting better. I mean I can email if I need to. I don’t like to, but if I need to.” Sounds like Tim is one hard man to get a hold of!

Tim has released 50 singles and 25 of them have reached number 1 spots on the Hot Country Songs or Country Airplay Charts. He has released 13 albums and 10 have reached the number one spot on the Top Country Albums charts and his 1994 album titled Not a Moment Too Soon was the top country album of that year! He has a total of three Grammy Awards, 14 Academy of Country Music Awards, 11 Country Music Awards, 10 American Music Awards and three People’s Choice Awards.

Tim met Faith Hill on the Spontaneous Combustion tour where Faith was the opening act. The two formed a relationship and things escalated quickly! When they were performing in Montana he popped the question by writing “Will You Marry Me” in lipstick on the mirror in her dressing room. Tim revealed, “she said, ‘I can’t believe you’re asking me to marry you in a trailer house,’ and I said, ‘Well, we’re country singers, what do you expect?'” She accepted his proposal by writing “yes” on the mirror in his trailer and the two married in on October 6, 1996 and had their first daughter, Gracie only eight months after their wedding (a little fact of information they don’t like to talk about). Their second daughter Maggie was born the following year and their youngest daughter Audrey was born in 2001. The close knit family lives on a 200 acre lot just outside Nashville, and in an interview with USA Today, Tim said, “It’s the most relaxing place in the world. We have bonfires all the time on the Back Forty and hang out on tailgates and pick guitars and have a few beers. I love my wife more than anything in the world, but boy, when she had our babies, it quadrupled. There’s just something about the connection.”

After high school, Tim jetted off to Northeast Louisiana University and studied pre-law. His inspiration for pursuing a career in law was the Al Pacino movie, ...And Justice For All, but it didn’t quite work out the way he thought it would. While in school he taught himself how to play guitar and admitted that his roommates used to hide the guitar from him because he was so bad. In an interview with Esquire in 2006 he said, “I got into school, picked up a guitar, joined a fraternity and started sucking down kegs. Law went out the window when my grades came back.” In 1989, on the same day that his country hero, Keith Whitley died, he dropped out to pursue a country music career in Nashville.

Tim has said in multiple interviews over the years that he likes to sleep in his birthday suit! According to Taste of Country, he “gave pajamas a real shot, but just can’t sleep with anything on him.” Only Faith Hill knows the real truth behind that. Also, since McGraw publicly announced in a People interview back in 2013 that he quit drinking and replaced whiskey with a strict workout regime, so based on that we’re pretty sure he looks great in his birthday suit!

4. He has Five Tattoos

Tim McGraw has a total of five tattoos — fans are only able to see some of them when he’s got short sleeves on. He got his first tattoo when he was only 22-years-old and drunk — a leprechaun wearing a cowboy hat on his thigh. His others are a Christian fish that we see all the time on his inner arm, the word “Faith,” a cross with the initials of his daughters on each point and the letter DHD above his ankle which stands for Dancehall Doctors.

Tim is extremely good looking and successful, but even the rich and famous have their little insecurities. Loyal fans of Tim will know that he’s rarely seen without a hat on — this country man loves his cowboy hats! However, the singer has admitted in the past that his large collection of head covers isn’t due to fashionable taste, it’s because he is insecure of his self proclaimed “five head.”

2. His Love for Country Music

McGraw wasn’t born with a silver spoon in his mouth and he is proud of that fact. He told the Washington Post in 1991, “I see it like [Roberto Benigni] at the Oscars. ‘I want to thank my parents for giving me the best gift of all: poverty.’ I gives you something to strive for.” Tim’s passion for country music began at a young age when he used to ride around on road trips with his step-dad Horace Smith. Horace was a trucker who delivered cottonseed. Tim often tagged along and spent hours on the road sitting in the cab of his step-dad’s 18-wheeler listening to Merle Haggard, George Jones, Charlie Rich and Charley Pride. Even though he thought he wanted to pursue a career in law, he always had a deep connection with country music.

Tim McGraw was raised by his mother in Start and Richland Parish. He grew up believing that his step-dad, Horace Smith was his father. As a child he went by the name, Samuel Timothy Smith, but around the age of 11 when his step-dad and mother divorced, he found his birth certificate in his mother’s closet while searching for Christmas presents and came to the conclusion that his biological father was Tug McGraw, a professional baseball player who was a star pitcher for the Philadelphia Phillies. In an interview with the Huffington Post, Tim reflected back on the whole thing, “I remember watching the World Series games and being 13 years old and sort of lucky that we could pay the light bill to have the TV on to watch the World Series game. It was a little strange dichotomy there.” Tug denied being his father for a long time; it wasn’t until Tim was 18-years-old that he acknowledged his paternity because the two looked so much alike. They didn’t have a great relationship at first, but as he got older their bond grew. When Tug passed away in 2004 from a brain tumor, he and Tim had a good relationship.