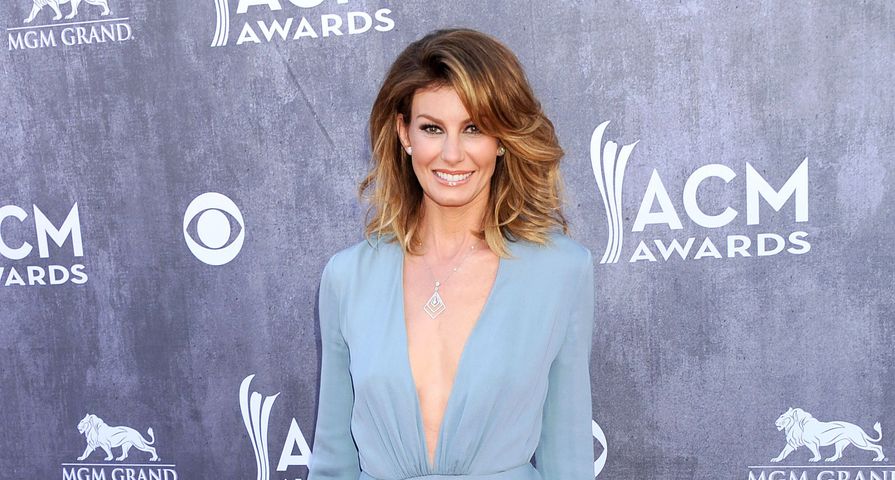 Despite putting her career on the back burner in order to raise her kids and focus on family, she’s still one of the highest selling female country artists in history. Faith Hill has sold 40 million albums worldwide and earned numerous number 1 hits like “Breathe,” “The Way You Love Me,” and “This Kiss.” In addition to all of her musical success, she’s an entrepuner and has even dabbled in the acting biz with roles in Touched by an Angel and The Stepford Wives. Faith just recently celebrated her 20th anniversary with husband Tim McGraw and will soon be celebrating her 49th birthday. Today, Faith Hill is the definition of beauty and grace — not to mention she’s wicked talented too! Hill has earned five Grammy Awards in her career and countless others. She’s one of the most beloved artists in country music and continues to floor audiences with her amazing voice. Here’s 10 things you didn’t know about Faith Hill!

Faith Hill was born on September 21, 1967 and adopted into a family living in the small town of Star, Mississippi. Her adoptive parents, Ted Perry and Edna, gave her the name Audrey Faith Perry. As she got older Faith had the itch to find her biological parents after she moved to Nashville as an adult. “I think I was just really searching. I was searching to figure out who I was inside,” she said. When asked about the first time they met, she said: “I don’t even remember what I said. I don’t remember what she said. We just kind of starred at each other. I’d never seen anybody that looked anything like me. It was the awe of seeing someone you came from. It fills something.” She met her biological mom in the early 1990s, but never publicly revealed her name and remained in contact with her until her death. She told Barbara Walters in an interview that her mother had given her up when she was child because she was young, unmarried and wasn’t ready. Her biological mother eventually married her biological father, but he was killed in a car accident before she ever got the chance to meet him. She also realized that she had a biological brother.

It was clear from the beginning that Faith Hill was destined to be a singer. When she was a little girl her mother used to give her quarters so she would sing at family occasions. When she was 16-years-old, she entered a tobacco spitting contest so that she could get time on stage. She was in her home state of Mississippi when she participated in a contest that required her to strategically spit into a placed spittoon. The winner got to go on stage afterwards. “They cleaned the stage off with towels, and then I went on,” she said in an interview with People. Fortunately, this wasn’t the place she was discovered. She was actually discovered at the famous Nashville Bluebird Cafe. She dropped out of junior college and moved to Nashville when she was only 19 to pursue a musical career.

Now Hill has no problem making money as a musician, actress and businesswoman, but before she landed her big record deal, she worked a bunch of different odd jobs to get by. In an interview with EW she said, “I really believed I’d just get on the Grand Ole Opry stage, start singin’, and be on a bus travelin’ the next day.” Instead she had to start from the bottom. One of her first jobs was working at McDonald’s: “fries, burgers, cash register…I did it all. I hated it. God bless the people that work there,” she said. She also did administrative work, sold t-shirts and worked packaging merchandise for Reba McEntire’s company. Before she was selling out stadiums, she was singing for prisoners at the local county jail near her school. She would sing “Amazing Grace” and read the bible.

Growing up Faith’s mom was the primary caregiver and wage-earner because he father was extremely limited in the jobs he could take because he wasn’t able to read. Her mother would often work three jobs to cover all the family bills and grocery costs. Later in life when Hill became successful, she started the Faith Hill literacy project in his honor. The program works to promote awareness for illiteracy in America and encourages fans to donate used books at her concerts. In an interview with Barbara Walters, Hill said she would often read to her father who quit school after grade 4. “I don’t think any of the children wanted to put my dad in a position of being embarrassed or make him feel bad ever. I have a great dad.” She also said in a separate interview, “I never knew how he got along without knowing how to read. He’s a very intelligent man. I guess he recognizes things easily and has a good memory.”

In 1988, when Faith was only 20-years-old she married Daniel Hill. He was nine years her senior and worked as a music publishing executive. They met during a meeting Daniel had with a young songwriter. He said, “About 20 minutes before our meeting, he called to ask if he could bring a friend from Mississippi to sit in. Little did I know he was bringing my future wife! I was immediately floored by her presence and I hadn’t even heard her sing yet,” he said. After dropping by his office a few times, Daniel asked Faith out on a date. Their first date was to a sushi restaurant where she tried raw fish for the first time. “Apparently they didn’t have a sushi bar in Star, Mississippi. But she was adventurous and willing to try.” He set her up with a job as a receptionist at a music company. In 1991 she got a record deal with Warner Bros after getting discovered while performing at the Bluebird Cafe. Her marriage started to fall apart shortly after the release of her debut album in 1994. During time time she found her biological mother. “Meeting her birth mom had a profound impact on Faith, which led to a profound failure of our marriage,” he said.

In December 2001, after sweeping the Grammy Awards earlier that year, Faith Hill gave birth when she was only 7 months pregnant. Hill was forced to give birth via C-section after a routine visit to the obstetrician revealed that the baby’s amniotic fluid was dangerously low. When asked about the terrifying experience, Hill said, “It was an emergency. We didn’t know what the outcome was going to be. We said a lot of prayers.” These prayers were answered when Tim and Faith welcomed their third daughter, Audrey Caroline, who weighed only 3 lbs and 11 oz. She was immediately sent into neonatal intensive care and stayed there for three weeks. “I couldn’t hold her for the first few days. That was the hardest thing I ever had to do in my life,” she said. When they were first introduced to their baby, Tim and Faith were only allowed to touch her if they were wearing latex gloves. “I’d stick my finger in the little isolate, and my first knuckle would be her entire hand,” she said.

Tim and Faith started their relationship when she joined his Spontaneous Combustion tour as an opening act in 1996. At the time, Hill was in a relationship with Scott Hendricks and they were engaged! On the other hand, Tim was in a serious relationship with another woman. Despite their separate situations, they fell in love hard and fast and, before the tour was over, McGraw had proposed to her on the mirror in a dressing room trailer. “I asked her to marry me right there. She said, ‘I can’t believe you’re asking me to marry you in a trailer house,’ and I said, ‘Well, we’re country singers, what do you expect?'” Before going out on stage he wrote the message on her mirror in lipstick and, by the time he came back, she responded with a sharpie on his mirror, “Yes.” Today, Tim and Faith have become a power couple not only in country music, but the music industry in general. They just celebrated 20 years of marriage and are still going strong today. They’ve toured together, recorded several duets and raised a family together. “I knew beyond a shadow of a doubt that this person had to be my mate for the rest of my life,” she said. When asked how she fell for him she said first and foremost how “gorgeous” he is, but also it was because he was comforting to her. Their three daughters are Gracie Katherine, Maggie and Audrey Caroline.

Once Tim and Faith started their family, they knew it would change their lives forever, especially in terms of their career. Both of them managed to maintain their success and keep pushing forward releasing album after album. In order to spend quality time together and not tear up their family, Tim and Faith embarked on tour together in 2006 and called it Soul2Soul. They brought the whole gang along for the ride. Hill said they’d wait until the kids were out of school on Friday and then everyone piled on a plane or bus and traveled wherever the next concert was that weekend. The 55-city tour broke ever country tour record including highest grossing and most attended that year. It generated nearly $89 million in sales. “I love to see her come offstage and go, ‘Yes! It was awesome. And I say to her, ‘Oh yeah? Watch this!'” Tim joked.

During a Q&A with Tim McGraw and Faith Hill, she revealed that the first album she purchased was Elvis Presley’s and he was also the first person she ever saw in concert! His work had the most influential impact on her career and music. In an interview with People she recalled sitting in the top row at an Elvis Presley concert in Mississippi way back in 1975. “When he walked out onstage he looked like a pea, but to me he was larger than life. I’m not sure what it was – his presence, the reaction of the people – but after that concert, I had to be a performer, pure and simple,” she said.

1. Losing a Job Saved Her Life

When Faith first moved to Nashville to pursue a career in music, one of the first auditions she went to was for a position as a backup singer for Reba McEntire. Hill never got the job because, according to Hill, she “wasn’t good enough.” A few years later, a plane with Reba’s entire entourage crashed and killed Paula Kay Evans, the singer who’d got the job instead and seven other members of her crew. When Hill first heard the news about the plane crash, she realized she could have been on that plane. “The first thing I thought when that happened, obviously, is I thought about the families of those that were lost and I thought about Reba and Narvel. I mean she’s an amazing woman who is very, very close to everyone around her, and I knew that that was something that it was going to be a difficult thing for her to deal with for sure. But she’s a classy lady and she handled it brilliantly,” she said.