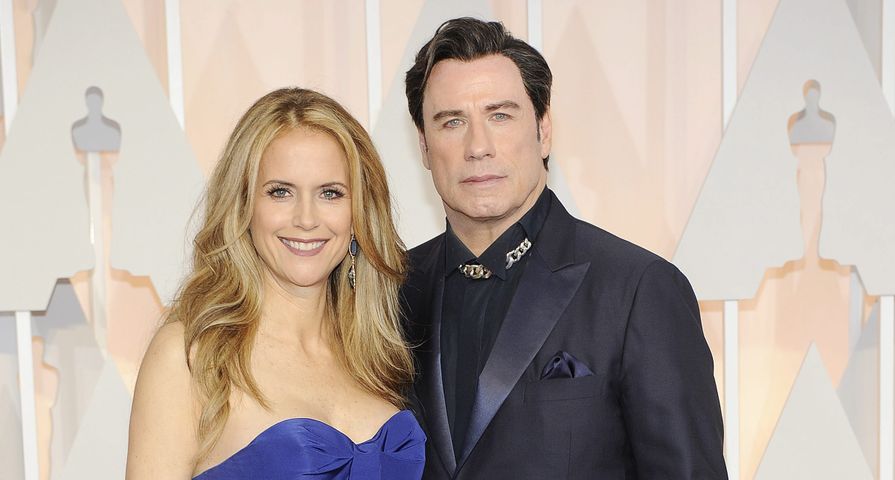 John Travolta and Kelly Preston were together for what seems like an eternity, or at least by Hollywood standards. The couple met on the set of a film back in the late ’80s and after a year and a half of dating, they got married in 1991. While the couple has had their share of struggles — rumors of infidelity, scandal and the tragic death of their eldest son — the pair stuck it out for the better. John and Kelly were definitely a power couple with enormous acting careers and were lumped in with a small group of couples with one of the longest standing marriages in showbiz. Following the tragic passing of Kelly, take a look back on their 28 years together:

John Travolta and Kelly Preston first met while filming The Experts back in 1987. At the time both of them were with other people. John was in a long-term relationship with TV star, Marilu Henner, and Kelly was married to fellow actor, Kevin Gage. Prior to dating John, Preston had some high profile exes like George Clooney and Charlie Sheen. Preston and Sheen lived together from 1989 to 1990 until he accidentally shot her in the arm after an argument. After their break up she began seeing Travolta, with whom she shared lots in common, especially to do with their shared belief in Scientology. John and Kelly dated for a year and a half until they married in Paris. When asked about the comparison of Travolta and her past relationships, Preston said, “John is definitely the greatest guy I’ve ever been with. I didn’t want to be with a bad boy anymore, and I wanted to laugh. John and I both have really whacked sense of humor. Our best friends tease that we’re the same person.”

Kelly Preston and John Travolta were both loyal followers to the Church of Scientology, as such they wanted their wedding to be officiated by a Scientologist. Their first wedding ceremony took place on September 5, 1991 at the Hotel de Crillon in France and was officiated by a French Scientologist minister. Unfortunately, the ceremony was found to be unofficial and so the couple had to hold another ceremony a week later on September 12, 1991 in Daytona Beach, Florida. The couple then went on to have three children, Jett, who was born in 1992, Ella Bleu in 2000, and Benjamin in 2010.

9. The Death of Jett

The loving parents were struck with the most horrific tragedy back in 2009 when they lost their eldest son, Jett, who was only 16. He died on January 2, 2009, after he hit is head on the bathtub while having a seizure. The Preston-Travolta family was on vacation in the Bahamas at the time of the incident. Jett suffered from Kawasaki Syndrome, an illness that affects children and results in severe allergies and asthma attacks. For the duration of his life, Kelly worked with the Children’s Health Environmental Coalition, a non-profit organization that helps educate parents on the environmental toxins that can affect children’s health and works to inform them about potential health hazards in the environment. During the trial against an extortion attempt around their son’s death, Kelly and John revealed their son had autism and suffered regular seizures. In memory of their son, Travolta and Preston founded the Jett Travolta Foundation, a non-profit organization to help children with special needs.

Back in 2015, when Kelly and John were celebrating 24 years of marriage, Travolta commented on how they make it work in an industry where divorce is rampant. “It’s a lot of hard work but we do it, and we adore our children. We’re having a good time with the whole thing. No, I’m happy with the results of our marriage. It’s been a great, interesting run here with how to navigate through bringing up children and how to navigate through marriage. There’s definitely an art to it, and you have to find the art that works for you. But it’s been good,” he said.

When it comes to their children, Kelly once revealed that John is the one who is constantly saying ‘yes’ to his children, while Kelly plays the reasonable ‘bad cop.’ Their children have learned that when she says no, they can go to him and he’ll give them the answer they want! He’s a bit of a pushover with the kids. She said he does it with their eldest, Ella Bleu but he’s the worst with their son, Ben. “Daddy says yes to everything. He’s that dad. They come to me first. [Ben] comes to me and says, ‘Can I have ice cream?’ at midnight and I say, ‘No, no, you have to go to bed’ – and, mind you, it’s midnight and he’s 5. And Dad’s like, ‘Sure! Do you want hot fudge on that?'” Travolta admits he does it and that it’s usually a bad mistake that falls back on Kelly because she’s the one who has to deal with the tired meltdown later. Whoops!

Aside from Tom Cruise, John Travolta and Kelly Preston were the most high profile members of the Church of Scientology. They were quite open about their beliefs and credit Scientology for helping them recover after losing their son. While they remained adamant that their marriage is strong, they’ve admitted to attending marriage counseling. Travolta told USA Today that “[the] outpouring of love from, really, worldwide has been extraordinary. It’s been our friends, our family. our church. We partake in spiritual counseling pretty much daily.”

John Travolta met Kirstie Alley before he was married. The two met on the set of Look Who’s Talking back in 1989. Kirstie has been extremely open about her past feelings for Travolta and the fact that they engaged in an “emotional love affair.” At the time she was married to Parker Stevenson, so they never actually acted upon their feelings, but she said the two fought them like crazy. In an interview with Howard Stern, Alley said, “It took me years to not look at John as a romantic interest.” In the past she has said that she wanted to “run off and marry” him and that he was the “greatest love of my life.” Travolta married Kelly Preston in 1991, and Kirstie’s openness about her feelings for Travolta might have made things a little awkward for Preston. Kirstie is adamant that her relationship with Travolta is strictly friendship, but she admitted Kelly was a little wary of her at first. “In the beginning, she would bust me. She would be, like, ‘Are you flirting with my husband?’ And the answer was ‘Yes,'” Alley said.

Back in 2012, the Travolta-Preston family was hit with some pretty awkward accusations and even lawsuits. Two male masseuses filed lawsuits against Travolta for sexual assault  (which have since been dropped) and in 2014 Douglas Gotterba, a pilot who worked for Travolta’s Alto airline company in the 1980s, alleged he had a sexual relationship with John for years. Rumors about Travolta’s sexual orientation are nothing new for the couple. Back in 1991, Time magazine published an article called “The Thriving Cult of Greed and Power” and inside the story, former Church of Scientology Executive Director Williams Franks alleged that Travolta was bound to the Church because he feared if he left details about his private life, including homosexual behavior, would be released. Travolta has said that he just brushes these allegations off as individuals seeking 15 minutes of fame and he doesn’t fight it because he can’t control the media. According to People, a friend of Kelly’s said she would get a little more defensive. “Kelly would make comments like, ‘It’s really sad when people will destroy a family just to make some money.’ She was angry. She was like, ‘You attack my family, and I’ll come down on you. I will fight back everytime.”

In an interview with Redbook back in 2001, John said it would take a lot for either Kelly or John to get angry at one another. “Kelly and I don’t get mad very easily. We have that in common. I had a girlfriend who had a temper, and I remember she liked to shake things up. I was never comfortable with that. I’m not one of those people who like to argue and then make up in bed. I have to settle the argument before I got to bed. Otherwise I’d be too preoccupied with ‘Did we really resolve that?’ to get romantic.” In a separate interview a year prior, Kelly said, “There are hard times, but they are few and far between. We almost never fight because we know what pushes each other’s buttons and we have made an agreement not to push them. And the sex is always okay!”

One of the aftermaths of rumors revolving around Travolta’s sexuality was that many people began to speculate whether Kelly and John’s marriage was real. Despite their longstanding relationship, the couple fought off those rumors for years. Back in 2007, Travolta told W magazine, “I have never felt compelled to share with you my bathroom habits or…my bedroom habits.” On the other hand, Preston told New York Post in 1999 that the idea of her marriage being a sham “pisses her off.” “Of all the condescending…[It’s] just so insane. It’s like, how do you respond to ‘Somebody said you were having an alien’s child?'”

1. Saying Goodbye to Kelly
On July 13, 2020, the world was shocked to hear of the passing of Kelly Preston at only 57 years old. At the time of her passing, a representative for the family revealed that the actress had been privately battling breast cancer for two years before her death. Travolta took to his personal Instagram to confirm the news of the loss of his wife after 28 years of marriage. “It is with a very heavy heart that I inform you that my beautiful wife Kelly has lost her two-year battle with breast cancer. She fought a courageous fight with the love and support of so many.  My family and I will forever be grateful to her doctors and nurses at MD Anderson Cancer Center, all the medical centers that have helped, as well as her many friends and loved ones who have been by her side. Kelly’s love and life will always be remembered. I will be taking some time to be there for my children who have lost their mother, so forgive me in advance if you don’t hear from us for a while.  But please know that I will feel your outpouring of love in the weeks and months ahead as we heal. All my love, JT.”

It is with a very heavy heart that I inform you that my beautiful wife Kelly has lost her two-year battle with breast cancer. She fought a courageous fight with the love and support of so many. My family and I will forever be grateful to her doctors and nurses at MD Anderson Cancer Center, all the medical centers that have helped, as well as her many friends and loved ones who have been by her side. Kelly’s love and life will always be remembered. I will be taking some time to be there for my children who have lost their mother, so forgive me in advance if you don’t hear from us for a while. But please know that I will feel your outpouring of love in the weeks and months ahead as we heal. All my love, JT