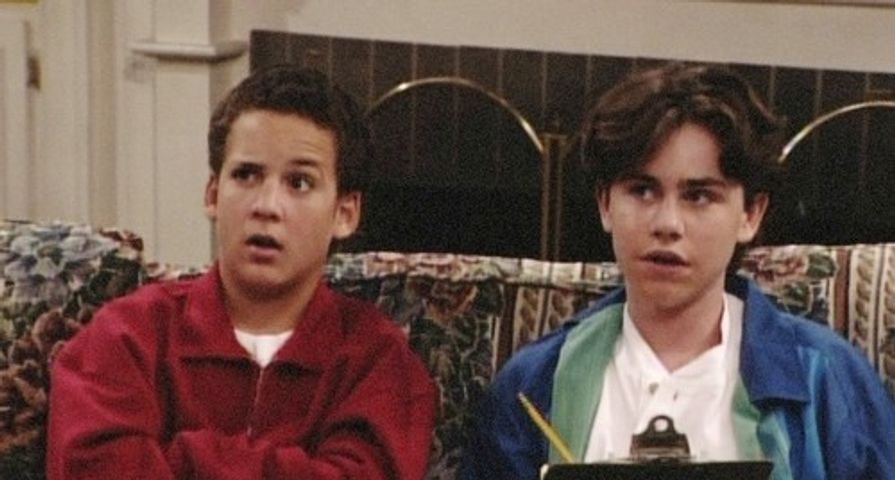 The hilarious and heart-warming family sitcom Boy Meets World was a hit with young fans as they grew up with Cory and company through the show’s great seven seasons. Since it has been 15 years since the show last aired in 2000, fans rediscovered their love for Boy Meets World when it was announced that favorites Cory and Topanga were coming back with a spin-off Girl Meets World. Being reminded of one of your favorite childhood shows makes you realize how much you missed, or didn’t notice about the cast, crew and show who brought it all together for you. Check Out 10 Things You Didn’t Know About Boy Meets World.

10. Only Ben Savage (Cory Matthews) and Rider Strong (Shawn Hunter) appear in every single episode of the show. In a close second however is Will Friedle (Eric Matthews) whose only absence was season 4, episode 9 “Sixteen Candles and Four-Hundred Pound Men.”

9. Although there is no stronger TV bromance than that of Cory and Shawn, it was almost disrupted by a third party. Initially they were supposed to have a third best friend who would featured prominently but they couldn’t get another actor to fit in the same way. In early episodes there is a different kid sitting next to them in the cafeteria, causing them to title the seat “The Death Chair” because the actor never came back.

8. Topanga was not supposed to be a regular character. Although we can’t imagine the show without Danielle Fishel as Topanga Lawrence, it turns out she was only supposed to be a fringe character, however her character became so popular from the first episode she was turned into one of the main ones. Fishel also wasn’t the first choice, she replaced an actress (reportedly Marla Sokoloff) who ended up not working for the part. Although she struggled on the first day, creator Michael Jacobs worked with her on what he wanted from the character and she blew him away the next day, earning a standing ovation.

7. Given the fact they were so young while filming all of the child actors had to actually attend school when not shooting scenes. They each had individual teachers and different sections but were kept in the same room which resulted in them learning in an actual classroom environment, chiming into each other’s lessons and learning things outside of their own lesson plans. Rider Strong almost quit the show in season 5 to go to college but Michael Jacobs promised him they would figure out a way to make both work, and they did!

6. Aside from the main stars, many A-listers also made an appearance before they were big stars. Adam Scott who went on to Parks and Recreation fame played the school bully Griff Hawkins. Linda Cardellini was in there for a few episodes, Brittany Murphy played her Clueless character Trini for a couple of episodes in 1995, the same year Clueless came out. Let’s not forget Jennifer Love-Hewitt was also in season five, episode 17 “And Then There Was Shawn” in 1998 which was inspired by ’90s horror flicks like Scream and I Know What You Did Last Summer which Hewitt starred in in 1997. The episode has also been deemed the cast’s favorite of them all.

5. Even though they all had great friendships and chemistry on and off set, Rider Strong and Will Friedle were best friends, and still are to this day, but that meant they couldn’t film many scenes together because they couldn’t stop laughing long enough to get a take.

4. In the series finale Fishel later admitted that Topanga wasn’t supposed to cry in her last scene but she couldn’t help it and they decided to keep it in anyway. The episode is actually the only time where Fishel’s neck tattoo is accidentally seen.

3. Rider Strong’s character Shawn Hunter was known for his charm with the ladies especially due to his gorgeous hair and as it turns out Strong showed up to his audition like that and the director liked the look so much, Strong wasn’t allowed to cut or change it for seven years.

2. By now everyone knows the show is so popular that it got its own spin-off on Disney, Girl Meets World. Fans however are still in love with the original, meaning that re-runs have done very well in syndication on ABC and Disney, although three episodes, “Prom-ises, Prom-ises (S5E22), “If You Can’t Be With The One You Love…” (S5E18) and “The Truth About Honesty” (S6E20) are all banned from airing on the Disney Channel because they deal with issues like teen drinking and pre-marital sex.

1. Mr. Feeny and Dean Bolander are married in real life. The two characters were married on the show but in real life William Daniels and Bonnie Bartlett were actually married! They got hitched in 1951 and have two children together.