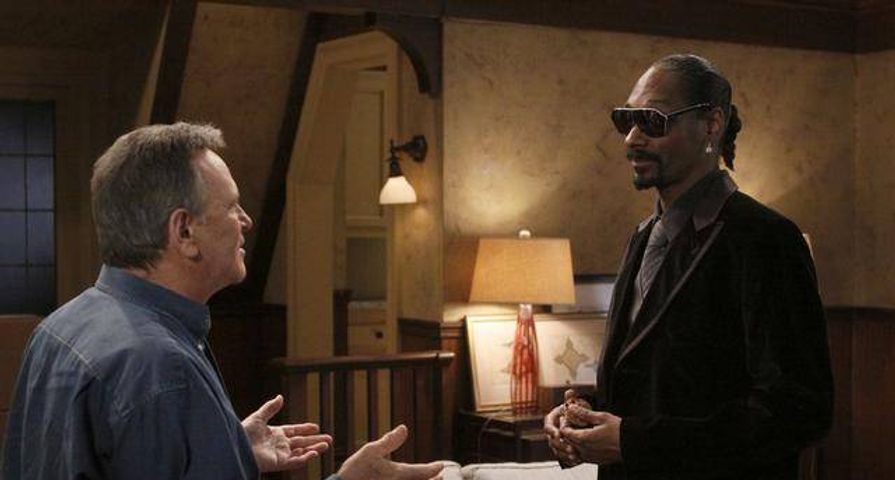 Soap operas have been around for a long time and some of them date back as far as the early ’60s! These daytime dramas are known for their wildly unbelievable storylines full of plot holes, scandal, mystery and, of course, petty drama! Despite their reputation, soap operas are a staple part of television and many have helped kick start a lot of careers! In fact, not only do we see soaps launching the careers of actors, but we’ve seen a lot of them backtrack onto soaps and do some pretty great guest appearances! These celebrity cameos aren’t exclusive to actors — we’ve seen professional athletes, singers and even politicians! Here’s a look at some of the strangest guest cameos on soap operas in the past:

It’s not unusual for Hollywood actors to start their careers in the soap opera industry; in fact many successful actors originated from daytime television. However, it is fairly unheard of when an actor who is well into his career with an Oscar nomination to detour back to daytime television. James Franco joined the cast of General Hospital on and off from 2009 to 2012. Not only was his appearance strange, but his character was too! Franco played the role of an artist/sociopath/serial killer named Franco. His character ended up being obsessed with Jason Morgan and believed his crimes were associated with art. In the end, Franco ends up kidnapping Jason’s girlfriend and best friend. Jason manages to save them both, but Franco gets away. He made returning appearances over the next few years. Casting director said, “He came in, and we threw a lot of material at him, because we only had him for a limited amount of time. So he would shoot episode after episode, in one day. So we gave him quite a workout. And he did a great job of playing one of the most bizarre characters we’ve ever had on the show.”

This American journalist and talk show host appeared on the popular soap opera General Hospital not once, but twice! She took on the role of a character named Bree Flanders, the madam of an upscale prostitute ring who was gunning for Luke’s girlfriend at the time. Vieira made her first appearance on the show back in March 2003 when she was at the height of her career as a host on The View and beginning her 11-year gig on Who Wants to be a Millionaire? While this cameo was a little strange, she did a good job and received a glowing review in the Soap Opera Digest where editor Carolyn Hinsey wrote, “She could actually act. And she was a very convincing hooker, which I knew she would take as a compliment.” She was welcomed back to the show in 2012, but instead of reprising her role in prostitution, she was the senior vice president of marketing at a cosmetics company.

8. Wayne Gretzky – The Young and the Restless

This one is extremely odd, but Gretzky isn’t the first professional athlete to dip his toes in the soap industry. Rewind back to November 12, 1981, this professional Canadian hockey player made an appearance on The Young and the Restless. At the time, he was 20-years-old and had only been playing in the NHL for three years, but he was already known as a legend. He was the league’s MVP for the first two seasons. Gretzky admitted he was a huge fan of soap operas and that he was looking for something to occupy his time in between practice and games. Thus, “The Great One” was cast as a mafia member who’s only lines were, “I’m Wayne from the Edmonton operation.” His episode aired the same day as Elizabeth’s Taylor’s famous appearance on General Hospital — it was a great day for daytime soaps!

This popular sitcom duo, Tom and Roseanne, first hosted Tony Geary and Genie Francis on their show in 1994. The soap actors appeared on Roseanne in their soap characters as Luke and Laura. The favor was returned when Roseanne and then-husband Tom later showed up on General Hospital in a guest spot. Barr was a fan of the series and appeared in three consecutive episodes. She played the character of Jennifer Smith, the daughter of a notorious mobster named Frank Smith. The partnership didn’t end so well as Roseanne and Tom ended up missing two tape dates. Arnold’s publicist stated it was because of scheduling conflicts with a film Tom was shooting at the time.

Back in 1982 the popular band B-52s hung out at the fictional dance club, Wired For Sound, on the soap opera, Guiding Light. The band performed two of their hit songs, “Throw That Beat in the Garbage Can” and “Private Idaho.” This cameo was really strange as the band members stood around and awkwardly chatted with the residents of Springfield. Even frontman singer Fred Schneider said afterwards in an interview that the whole thing was a little weird as he admitted he was a terrible actor and wasn’t sure why producers wanted them to perform “Garbage Can” because it hadn’t even been released as a single. Nonetheless, their presence on the show was a great surprise for viewers!

5. Jesse Ventura – The Young and the Restless

Jesse Ventura is a former professional wrestler  who turned to acting after his career in the ring ended. He’s also dabbled in a bit of politics, but the strangest thing of all was when he made an appearance on The Young and the Restless in 2000. Ventura was a huge fan of the show and, when he made his debut, he played the character of himself, which at the time was Mayor of Brooklyn Park in Minnesota. Reportedly, Ventura insisted that if he was to play himself on the show, he would only meet with the fictional famed businessman, Victor Newman. The storyline revolved around Ventura recruiting Newman to be his running mate for the U.S. presidency, but things never panned out because the two couldn’t decide which one would take the vice president position.

Yogi Berra was widely recognized as a professional baseball catcher, manager and coach. He was famed for being an 18-time All-Star and 10-time World Series champion who is known as one of the greatest catchers in baseball history. Similar to Wayne Gretzky, Berra was an odd casting for the soap industry, but he was able to pull it off because he wasn’t known as a ‘rough player.’ He made his appearance on General Hospital in 1963 when his All-Star days were winding down and he had already made quite a name for himself in sports. At the time, the producers of General Hospital were huge fans of the New York Yankees and they recruited Yogi for the show. They wanted him to play the role of a brain surgeon. He was offered a measly check of $150, and he agreed because he said he wanted his family to see him act. Berra took a trip to Los Angeles, was given some lines to read which he had no trouble with and appeared on the show as Dr. Lawrence P. Berra. Later in life he wrote a book called “When You Come To The Fork In The Road, Take It!” where he recounted his experience on the soap. “And I once was a brain surgeon–no kidding–in a General Hospital episode, in the early ’60s. Those were the days before soaps got sexy.” Berra passed away on September 22, 2015.

3. Jerry Springer – Days of Our Lives

Jerry Springer has done a lot in his career. He started out as a lawyer, politician, journalist and then finally as host of the infamous Jerry Springer Show. He’s made a few odd appearances like on Dancing with the Stars, but the weirdest of all was on Days of Our Lives in 2007. Springer has a controversial reputation in the media, so it’s safe to say this particular soap opera cameo wasn’t a fan favorite. He did a one-episode stint as a character named Pete, a Las Vegas high roller. Springer’s character runs into Nick Fallon at the casino when Nick is down and out on a losing streak. Nick has lost most of his money and Pete swoops in to help him out. Spoiler Alert: With a little assistance from Pete, Nick ends up winning $50,000 and successfully woes Chelsea Brady in the process.

This celebrity cameo is undeniably surprising to even the most fanatic soap opera fans! Snoop Dogg, also known as Calvin Broadus, has appeared on the now cancelled soap opera, One Life to Live, a total of three times! Snoop first traveled into the fictional town of Llanview in 2003 as himself, but later as Snoop Lion in 2010 and 2013. Snoop Dogg claims to have been a fan of the series since was “a baby” and his favorite character was Bo Buchanan. In 2010 he came on the show and did a scene with Bo and Nora Buchanan where he convinced them to let their son go to his concert. He surprised the two with his extensive knowledge of them both and for that particular performance he performed the theme song for the show! He returned to the show in 2013 to promote his new film and brought another theme song called “Brand New Start,” but by this time the show had been cancelled by ABC and was only accessible as a web series.

Her appearance was on the most famed episode in soap opera history! When Elizabeth Taylor made her appearance on General Hospital in 1981 she played the character of Helena Cassadine, Mikkos Cassadine’s widow. At the time, General Hospital was at the peak of its fame, raking in an estimated annual profit of $50 million. The success continues as the episode is still talked about today because it went down in history as the highest rated soap opera episode ever with a net viewership of 30 million people. But this wasn’t because of Elizabeth Taylor’s appearance, it was because the episode featured the marriage of soap opera power couple, Luke and Laura! In fact, it was Taylor who requested to be on the show! Her character came on the scene of Port Charles with the intention of undoing all the harm her late husband did, but ended up cursing Luke and Laura on their wedding day. Taylor’s role on the show lasted for three episodes, a total of two filming days. She was paid $2,000 for her work, but she donated it all to a Virginia Hospital. Famous soap actor, Tony Geary, who played the role of Luke, told Katie Couric during an interview that he had a two-year affair with Elizabeth Taylor after she filmed for the show.