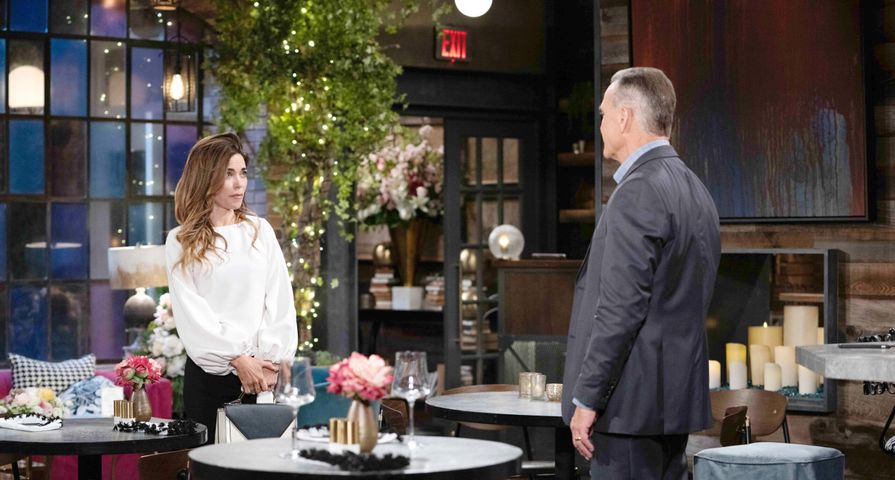 Calling all Young and the Restless (Y&R) fans! What’s on tap in the land of Genoa City over the next week? Chelsea makes a sketchy move, while Summer stands by Kyle. Also, Sally forms a new alliance. Learn about these storylines and others in the below Y&R spoilers for the week of May 24, 2021.

Y&R spoilers imply that Chelsea Lawson will do something sketchy in the coming days. Added teasers hint that she’ll learn her fate, so it sounds like she may “stage” a relapse with her recovery. If she feels as if it’ll lessen the blow around a sentence, Chelsea will do what it takes.

Not overly unexpected, but Y&R spoilers suggest that Summer will stand by Kyle this week. While Tara and Harrison have complicated their relationship, Summer will remain firm in her decision to stay with her love. Added teasers hint that this will rub Nick the wrong way. He’ll feel as if Summer’s setting herself up to get hurt again. Phyllis will rush to her daughter’s defense and tell Nick to trust his daughter.

Will Nick back off, though? Y&R spoilers reveal that he and Jack Abbott will butt heads in the coming days. This probably has to do with Skyle. Added teasers indicate that Jack could learn that Harrison is Kyle’s son in the coming days. Perhaps the secret explodes, which might be why Nick’s so upset. In other related news, Tara and Harrison will hide out in the Abbott mansion until paternity test results come in.

Y&R spoilers suggest that it won’t take long for Harrison’s DNA test to come back. Once it confirms that Kyle is his father, Abbott will insist on moving things forward to claim the young boy as his son. Added teasers note that Kyle will be ready to take on Ashland in any way. Harrison is his son, and he’ll be ready to fight for him.

Speaking of Tara, Y&R spoilers state that Sally will form an alliance this week. Sounds like there’s a good chance she and Tara will come together to help destroy the Skyle relationship. Spectra may offer Tara a certain amount of protection against Ashland, too. At this point, Tara could use all the friends she can get.

Y&R spoilers hint that Vic and Ashland will get a little closer in the coming days. They’ll spend more time together, and their bond will grow. In added teasers, the Locke-Ness Monster will offer Jack Abbott a warning, and this will have to be about Tara. She’ll be at the mansion next week, so Jack may want to have his guard up.

Across town, Y&R spoilers indicate that Victor will give Amanda some unexpected news. Added teasers suggest that whatever he tells her could change her view on her bio family. In fact, this will prompt Sinclair to do some more digging. She may continue to go back-and-forth on whether she wants to be on her grandfather’s case, after all. This “news” will be a “secret” that Newman knows, and Amanda will have to decide how to move forward with it.

Victor will also be busy strategizing with Adam this week. Y&R spoilers imply that the two will have plans of destruction for ChanceComm. The goal is to completely wipe the company out. Meanwhile, Bi-Li will be busy making some plans of their own. Added teasers state that it’s moving day for the super couple, so expect some cute and fun scenes with these two as they embark on the next chapter of their love story.

Sharon will be impressed by Mariah, as Copeland relays a lesson learned. Meanwhile, Abby will be missing Chance more and more; so much so, she’ll confide in and get support from Devon. Lastly, Friday’s episode (May 28) will be a special one that honors the memory of Neil Winters. Devon will take a walking tour of Genoa City, offering some incredible memories of the great man, husband, friend, and dad that Neil was.