Home » Trending News » We Weigh In: What Will Finn’s Demise Trigger On B&B?

We Weigh In: What Will Finn’s Demise Trigger On B&B? 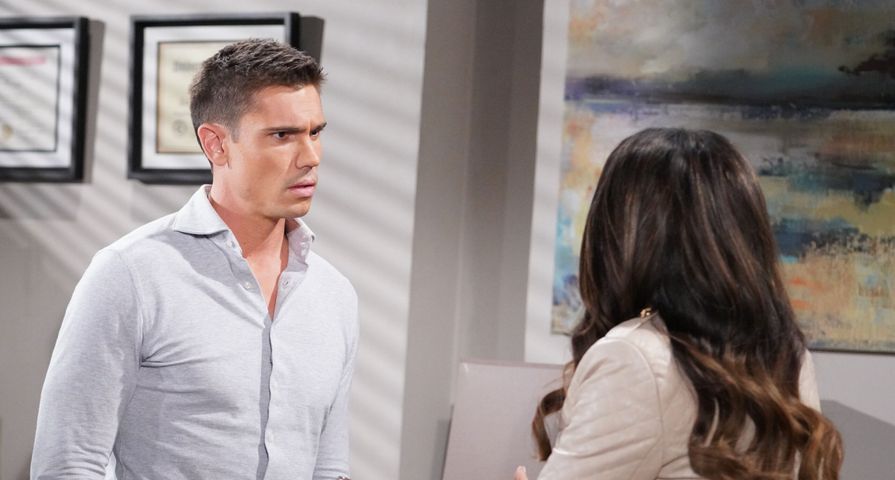 The Bold and the Beautiful (B&B) lit a powder keg last week when John “Finn” Finnegan was fatally shot by his birth mother, Sheila Carter. Was this the much-hyped plot twist, or will Finn’s demise trigger new dominos to fall?

B&B viewers are divided over this swift and brutal murder, with many unsure why it had to happen. For many “Sinn” fans, Finn represented the possibility that Steffy could find lasting happiness, despite her troubled past.

Beyond his attentive husband role, however, Finn didn’t have a whole lot going on. His occupation as a doctor was rarely utilized in storylines, and his personality never evolved. Instead of developing Finn – especially after his blow-up with adoptive-turned-biological dad, Jack – B&B writers chose to reset him to factory settings: kind and bland.

Want spoilers? Check out Bold And The Beautiful Spoilers For The Week (April 11, 2022)

So, Finn became a sacrificial lamb. But what does the CBS soap gain by ending Finn’s life in such a permanent way? A lot. First of all, it tidies up the logistical need of letting Steffy portrayer Jacqueline MacInnes Wood go on maternity leave. Secondly, it spares the writing team from trying to keep Finn interesting without Steffy around.

On a broader scope, Finn’s passing has woken up the entire show. Two weeks ago, Sheila was still having flashbacks about changing a champagne label. Now, she’s committed a crime that is on par with anything she’s done in the past, but also way more personal. She has killed her own son!

By empowering Sheila with her original pathos, B&B writers have put the criminal on a brand-new path. Sheila is becoming unhinged like never before, and actress Kimberlin Brown is digging deeper than ever to convey that internal conflict.

Suddenly, all of the tensions which had been sagging over the past three months feel electric again. The secret between Thomas and Sheila has now drawn blood. The dynamic between Deacon and Sheila will get complicated. Even Finn’s adoptive mother, Li, is back on the canvas and shooting daggers at Ms. Carter.

Will Sheila frame ex-con Deacon for the shooting behind Il Giardino? Will Thomas get wise to Sheila’s presence in the alley that night? And what will Jack do – given how much he knows the real Sheila – when he finds out his son has passed?

But look out, “Sinn” fans, because those questions are just the tip of the iceberg. Will Finn’s demise lead to a Liam and Steffy reunion? Liam recently told his dad, Bill, that he will always love Steffy, and spoilers indicate that he will soon take up additional parenting duties for Kelly and Hayes.

Want B&B news? Check out Bold And The Beautiful News Round-Up For The Week (April 4, 2022)

It’s no secret that executive producer and head writer Brad Bell loves this super couple, but revisiting this tired romance would anger many viewers – especially if Finn’s passing is the major plot twist.

Producer Casey Kasprzyk promised that the plot twist would capture “Brad Bell at his best” and “change the show forever”, so let’s assume (or pray) that B&B’s endgame isn’t a “Steam” retread.

Instead, the plot twist could be set in motion by Finn’s passing and cross over to The Young and the Restless (Y&R). Many fans thought it strange that Steffy told Sheila she should go back to Genoa City, while, over on Y&R, Diane Jenkins mentioned Deacon Sharpe’s name. Two crossover mentions in one week? Could these two worlds collide?

Want more spoilers? Check out Bold And The Beautiful Spoilers For The Next Two Weeks (April 4 – 15, 2022)

It’s curious enough that Diane has been resurrected, let alone that she’s residing in Los Angeles – barely a stone’s throw from her old partner in crime, Deacon. The only other character that could unite these two is Nikki Newman, and guess what Y&R head writer Josh Griffith had to say about that?

“On one hand, Nikki will be, ‘Oh thank God I never killed her’, but on the other hand, ‘Now I want to kill her!’” Griffith explained in the new issue of Soap Opera Digest. “We’re doing a slow simmer on that side that will be building because we have two great players in Susan and Mel [Diane and Nikki, respectively].”

If Diane’s storyline eventually dovetails with Nikki’s, will Nikki’s ex-husband, Deacon, become a gateway between Y&R and B&B? While it seems far-fetched, this crossover would indeed live up to Kasprzyk’s plot twist hype.

Want more spoilers? Check out Bold And The Beautiful: Spoilers For April 2022

Regardless of whether that crossover comes to pass, the plot twist won’t end with Finn’s demise. Wood recently spoke with ET Canada and hinted that big things are on the way.

“For the viewers, just buckle up because there’s going to be a lot of twists and turns right now,” Wood promised. “Things are moving very, very quickly, so I really have no clue… but right now, we’re in the thick of it.”

And, on the off-chance Finn really was axed just to push Liam and Steffy back together, let’s hope Brad Bell takes the opportunity during Wood’s maternity leave to think bigger!