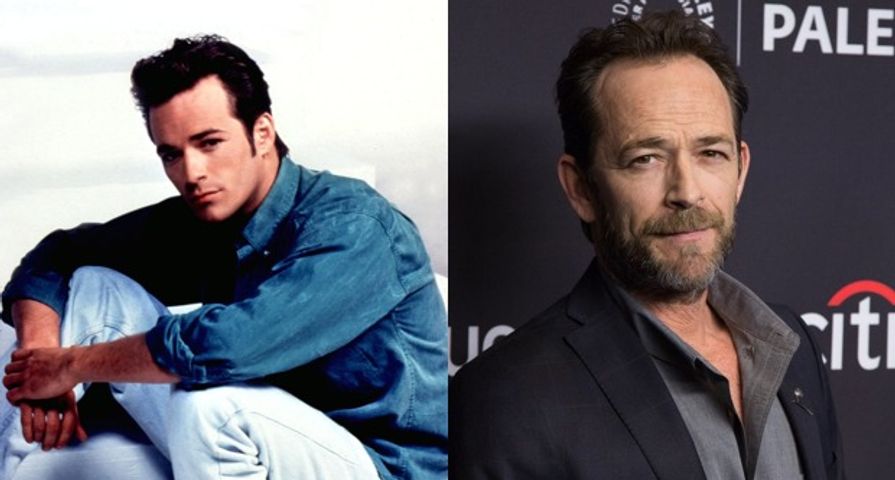 Reasons You Should (And Shouldn't) Watch Riverdale

Perry, got his start in acting in the early ’80s but it wasn’t until the late ’80s and early ’90s when things began to take off with his roles in Another World, the Buffy the Vampire Slayer 1992 movie and the cowboy film 8 Seconds. Of course, the role he is most memorable for his starring as Dylan McKay in the iconic teen drama Beverly Hills, 90210 from 1990 to 2000.

When the series came to an end, Perry continued to act, but it wasn’t until 2016 when he took on the role of Fred Andrews in the hit teen series Riverdale that he was fully back in the spotlight!

In 1993, Perry married Rachel Minnie Sharp but the pair split a decade later in 2003 and shared joint custody of their children Jack, 21, and Sophie 18.

In honor of the star’s birthday, take a look back on Beverly Hills, 90210 and all of its off-screen drama with the show’s biggest off-screen controversies:

11. Wait, they’re supposed to be teenagers?

Pretty early on, something seemed a little sketchy about the actors playing teenagers on Beverly Hills 90210. A lot of them just looked older than anyone you’d see in high school. And that’s because they were. When you looked at other shows with teens in the ’80s and early ’90s, they mostly looked their age. The Cosby Show, Growing Pains, Family Ties. Well, actually, Michael J. Fox was older, but always looked young. But let’s take a look at the ages of 90210’s key players, circa 1991, when most of the characters would’ve been around 17. Jennie Garth: 19; Shannen Doherty: 20; Jason Priestley: 22; Luke Perry: 25; Ian Ziering: 27; Gabrielle Carteris: 30. Thirty? It was especially obvious with Ziering as Steve and Carteris as Andrea. It just looked wrong.

10. The show’s handling of virginity

If you watched the show, you know there was more than one take on this subject: Donna Martin was notoriously the show’s long-time virgin, holding out until the time was right for her, long after her friends did the deed. But it’s rumored that it was her producer father’s idea for his darling daughter’s fictitious alter-ego to wait until after college. Then there was Brenda. Back in 1991, after Brenda lost her virginity to Dylan at age 16, Shannen Doherty (who, of course, played Brenda) herself told TV Guide she believed Brenda was too young to be having sex, and that she was concerned about being seen as a role model. It would be interesting to know if she caught any flak from producers for speaking out against the show – after all things soured pretty quickly for her both on and off-screen during her run on the series.

Netflix's The Chilling Adventures Of Sabrina: 12 Things To Know

All the drama from the original Beverly Hills 90210 of the 90s evidently spilled over into the 2000’s reboot, called 90210. Garth returned to the reboot to play Kelly Taylor in 2008, but has publicly stated that the new cast didn’t have any chemistry. That’s definitely something much of the cast of the original series did have. Shannen Doherty and Luke Perry totally sparked as Brenda and Dylan. Even Doherty and Jason Priestly made a good brother-sister pairing, with all the comradery and rivalry that came with it. And Garth and Ian Ziering, as Kelly and Steve, had a good “exes trying to be friends” vibe early on. And, who knows, maybe all the off-set fireworks we’re talking about in this list played a role in the on-set chemistry.

When you think “90210 controversy,” Ziering isn’t the first name that comes to mind. He was one of the older “teens” on the show and not really prone to producing tabloid fodder. But he did admit that he gave his dressing room a bit of an impromptu  makeover during the filming of a season four episode. In the episode “Take Back the Night,” his character, Steve, was wrongly accused of rape, and Ziering says he got to do some really powerful acting – but a lot of it got left on the cutting room floor. He felt that was really unfair, so he took to his dressing room and ripped it apart.

Shortly after Tiffani-Amber Theissen joined the cast as Valerie Malone to start season five, essentially replacing Shannen Doherty’s Brenda as the series’ bad girl, rumors spread that there was a weight clause in her contract. In other words, she wouldn’t be allowed to weigh more than a certain amount, or she’d be in violation of her contract and could be fired. The rumors centered around the notion that she was a renowned devourer of candy, which could lead to weight gain. She did shoot down these rumors, but you never know with all the body shaming that goes down in Hollywood – and pop culture in general.

6. How did Tori Spelling really get her job?

To say there were whispers of nepotism surrounding this show would be an understatement. More like shouts. And they were all directed at the Spelling family. For her role as Donna Martin, did Tori Spelling really have to audition like everyone else? Were the playing fields level? After all, her dad was the multimillionaire producer of the show, along with previous hits like Dynasty and The Love Boat. So, did papa Aaron pull some strings to get his teenage daughter on the show? Consider this: almost all of Tori’s pre-90210 credits, according to IMDB, list her dad as one of the producers. And she wasn’t exactly regarded as a master thespian at any point in her career. That would be another understatement.

As Kelly and Valerie on the show, the two didn’t always see eye to eye. Valerie was a bit of a wild child and Kelly was never afraid to speak her mind, so it was natural for the two to clash from time to time. In fact, they were pretty much bitter enemies. But apparently the venom spilled out beyond the set as well. Theissen, who played Valerie, recently admitted that the two actresses had a falling out. Apparently she didn’t get the friendliest of receptions when she joined the show for season five. Things were smoothed over at some point when Garth apologized for how things went down early on, but then things soured again. In fact, she told Howard Stern that the girls on the show in general were “not very nice to me.”

On-screen, the Walsh twins mostly got along. After all, they were just innocent kids from Minnesota suddenly caught up in Beverly Hills drama, right? But all wasn’t always “you betcha” Minnesota happiness off-set for the two actors that played the twins. And it came down to the whole age controversy we mentioned earlier. Ian Ziering (Steve) recounted an incident early on. Apparently Priestley didn’t want anyone to know his age, but Doherty snuck into his dressing room and found his driver’s license, then announced to everyone that he was 21. Priestly was allegedly so fuming mad at his on-screen sis that he grabbed her and threatened her.

Rumors of drama surrounding Shannen Doherty on set seemed never-ending. There were the arguments with cast, crew and producers. There was all the diva-like behavior. But it’s said that the last straw for producers was when she cut her hair during the filming of the fourth season’s finale. The change in ‘do created continuity problems and they decided she wouldn’t be back for season five – or any other seasons for that matter. Enough was enough.

This would seem to be the feud to end all feuds on Beverly Hills 90210. A true heavyweight showdown between the show’s two female leads. The “Thrilla in Beverly Hillsa.” Okay, we joke about comparing it to a boxing match, but there were rumors that the two actually came to blows. Well, Garth recently published a memoir and debunked that rumor – but she said it came awfully close. She tells of Doherty taunting her on set and flipping up her skirt to reveal the full Garth moon, to which Garth responded, “Come on, b—ch! We’re taking this outside!” But Luke Perry and Jason Priestly put a kibosh on the Thrilla in Beverly Hillsa, and the two never resorted to fisticuffs. Clearly, the two actresses didn’t get along, and that was reflected on-screen, as Kelly and Brenda morphed from besties into enemies.

1. Shannen Doherty vs. Everyone

Sure, Doherty seemed to have a particularly nasty feud with Garth, but she actually didn’t seem to get along with anyone during her four seasons on the show. In his recent memoir (who doesn’t have a recent memoir among the cast?), Jason Priestley claimed that Doherty “really and truly did not give a sh-t.” He recounted a time when Doherty even gave a Fox publicist a hard time for ordering her a town car instead of a limo – before the show was even picked up! Of course, she claims pretty much everything he said in his book is untrue. As early as 1992, a Rolling Stone article alluded to her being a “spoiled brat” and “difficult.” She claims her feisty attitude came from something a former co-star, the late Michael Landon, told her: “Go with your instinct, and never let anybody walk over you, and always stick up for what you believe in.” But could it be she took that a little too far?